From a distance, the styling of the electric classic Mercedes is sublime. Those distinctive lines, iconic shape, the light dancing on the chrome. It’s unmistakably a classic Benz.

Look closer at the detail. Every crease, curve, panel, and join is set exactly as Mercedes-Benz intended. The finish, the material, the craftsman’s touch… It’s undeniably an SLSHOP classic Benz.

Pull the chrome door handle and slide across the leather. Reach for the padded door pull… Wait for the thud, as one of Stuttgart’s all-time greats envelops you in a luxury cocoon. Strap yourself in, focus on the horizon, and turn the key…

Nothing… Depart in silent, electrified luxury.

Welcome to SportLine Zero; an electric classic Mercedes. Finally, a modern take on a classic look.

The original SportLine started with a question. The SportLine Zero electric classic Mercedes began with a comment. From that moment, we simply had to build one… And we don’t use that word lightly. This isn’t a conversion.

Electric vehicle technology has become part of the modern motoring world. But the classic car industry was slow to embrace electric power. Then capital cities placed restrictions on internal combustion engines, based on emissions. As a result, the market for classic electric vehicles took root.

Embracing greener driving, those looking for a zero-emissions drive began to reach out. Once, there was apprehension about how the EV market might impact the classic car world. Now, there’s clarity and vision. We didn’t need an off-the-shelf conversion kit for the part-time mechanic. The market wanted a perfect representation of an SL. One that was superbly built and not compromised.

Born in 1971, ‘Greta’ arrived at SLSHOP ready for retirement. With a missing engine and faulty gearbox, she was left for hungry workshops to scavenge.

Call it destiny or call it timing. But as this SL rolled to its final stop at SLSHOP, Sam Bailey was hunting for an early car to transform. In the spirit of re-use and recycle, we plucked Greta from the jaws of the mechanics. She was sent to restoration.

Over the next year, we stripped this car to its core. Every issue was cared for to the highest degree. We wanted the first SportLine Zero to be both a showstopper and a show winner. The modern technology under the bonnet gave it show-stopping qualities. The old-fashioned craftsmanship added show-winning credentials.

From the outset, we saw SportLine Zero as an R107 electric classic Mercedes SL. We committed to building it in the true spirit of Mercedes-Benz. It wasn’t just a case of adding modern power to a classic chassis. We wanted old and new blended into one.

Every aspect of SportLine Zero was carefully planned to maintain the handling characteristics of the R107.

Many electric classic cars use a modern electric drivetrain with a pretty outer shell. But the R107 electric SportLine Zero keeps the axles, suspension, and driveshaft of the original. Wherever possible, we’ve used old-school technology to give it the weighty handling that R107 owners love.

The svelte lines of the R107 make it one of the most iconic shapes of all time. It’s a cutting edge design that neither dates nor fades. With the addition of 10 Tesla batteries, this car becomes… The most aesthetically accomplished and technologically capable classic car in the world. 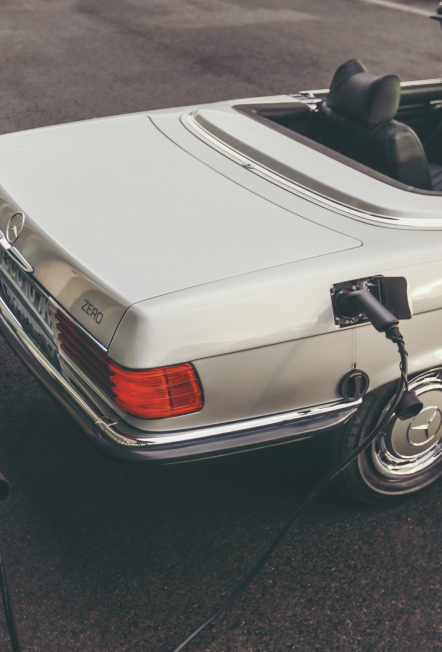 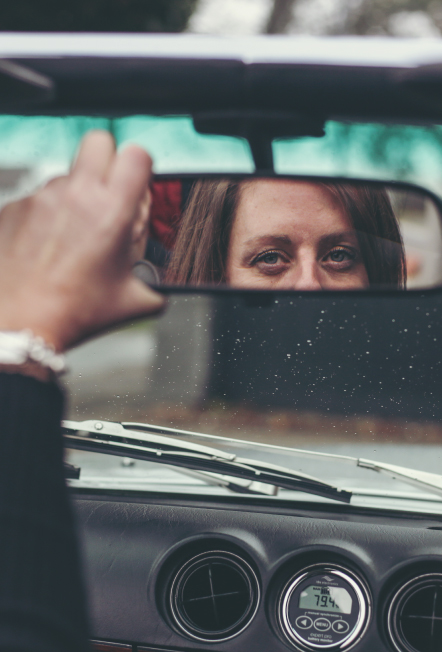 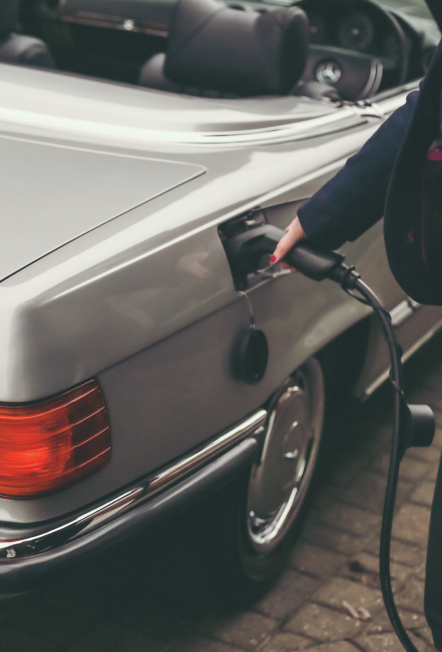 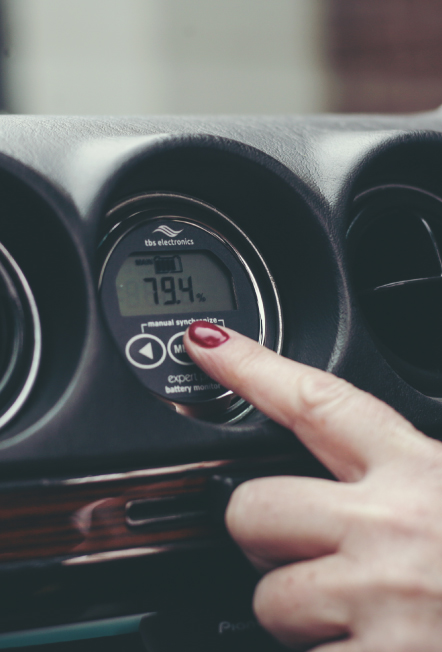 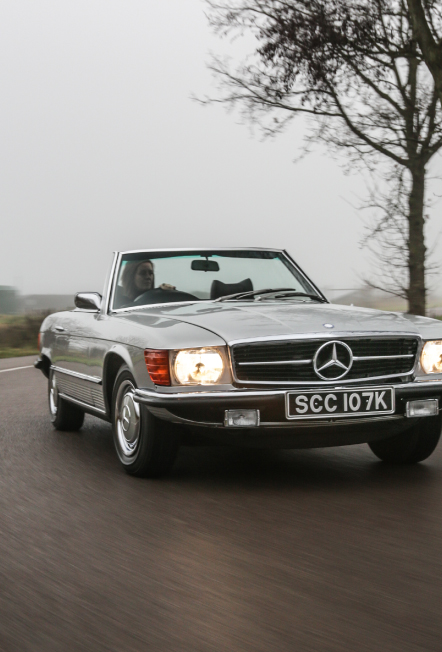 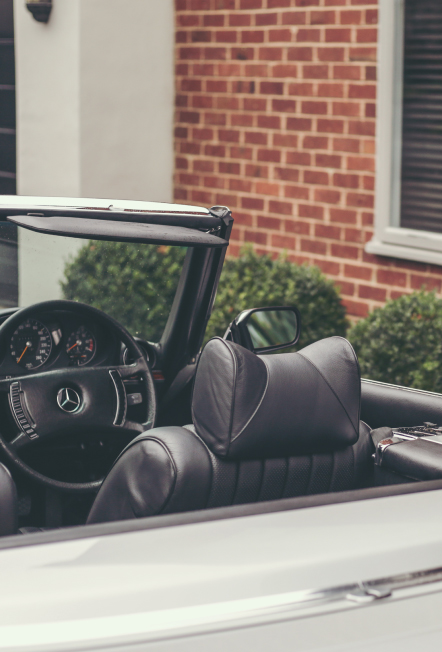 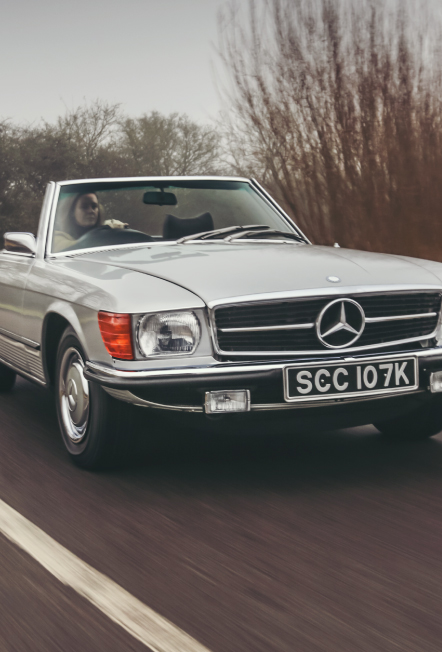 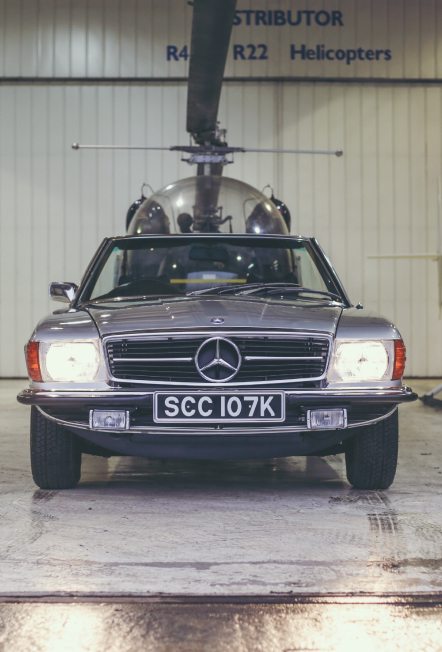 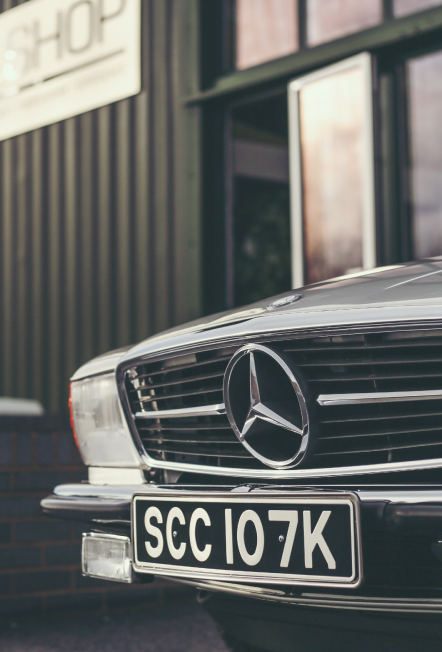 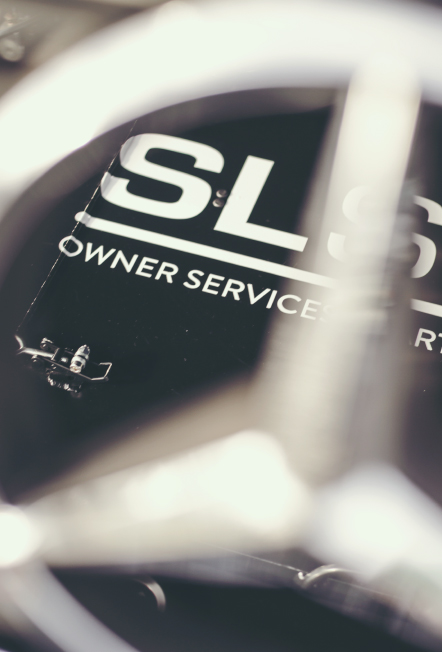 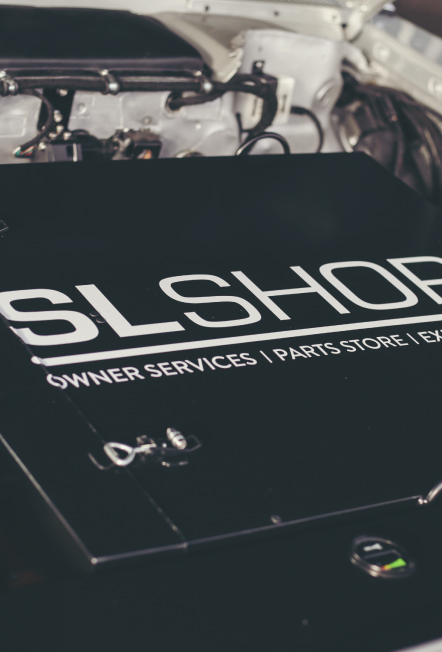 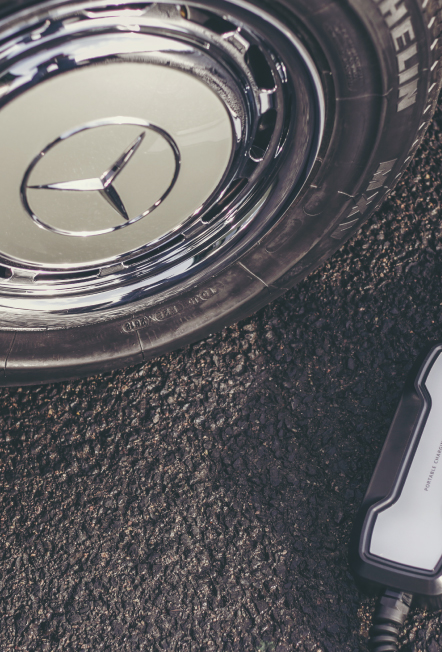 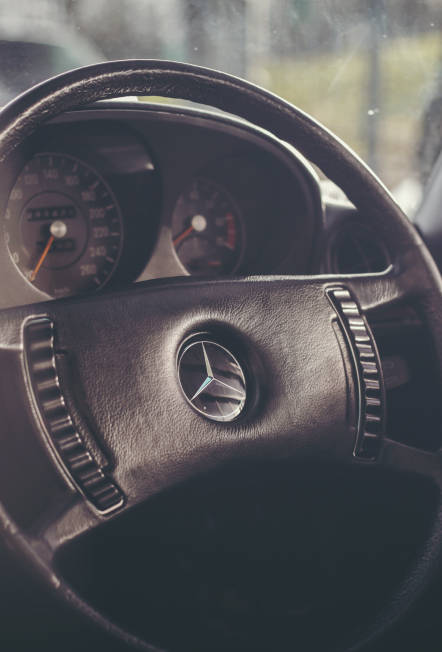 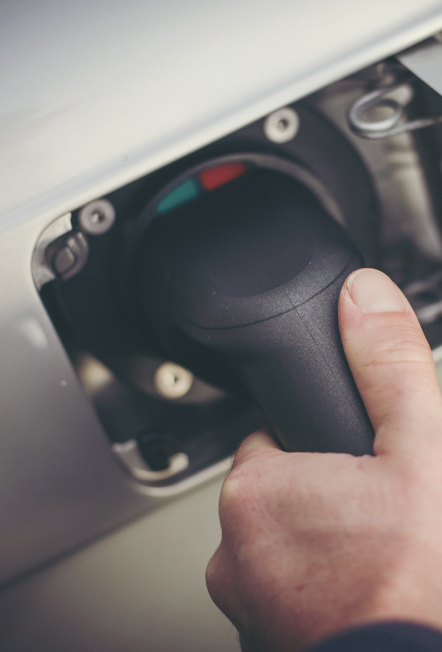 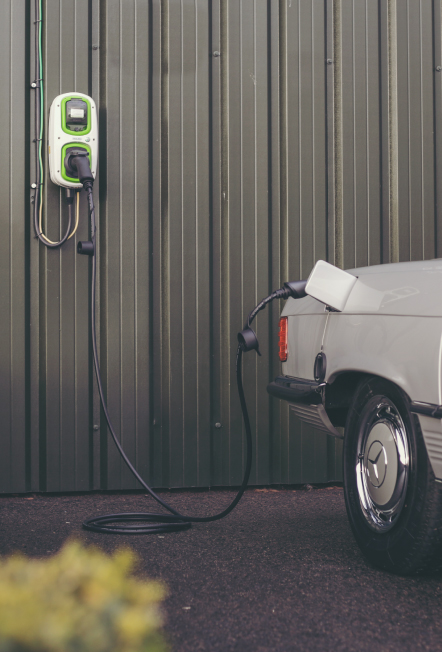 Pull the chrome door handle, slide across the leather, and get comfortable. Reach for the luxurious padded door pull… Wait for the thud as this all-time great wraps you in a luxury cocoon. Strap yourself in, focus on the horizon, and turn the key…

There’s a faint electrical hum as the car comes to life. It rises to a barely audible crescendo. A red light on the dashboard shows that all is well. The LED gauge that used to be a temperature dial shows battery levels.

It’s balanced front-to-back by an even split of batteries, shared between the boot and bonnet. It also weighs roughly the same as a standard R107 SL. The electrics and running gear are all smartly hidden. There are no clues to the car’s potential other than the dials, a non-standard gear selector, and charging plug beneath the fuel flap.

Unlike a traditional engine, the electric classic Mercedes motor is quick to come to life. There’s no delay as fluids warm and belts churn. Once the key is in the ignition, the SL is ready for you to enjoy. Although we don’t call it the ignition, because there’s nothing to ignite…

Mounted in the front and rear are 53kWh of Tesla batteries, powering a 150hp 213lb.ft electric motor. This is more than enough power for an SL and offers 150 miles of range. It’s perfect for the average enthusiast.

The SportLine Zero uses standard R107 axles, driving though a manual transmission. You can pop it into second gear and drive like a conventional two-pedal automatic.

Push the throttle and the SportLine Zero delivers its power delicately. We’ve dialed down the acceleration at slow speeds to closely match the R107. This gives it a less robotic feel than other EVs. It offers 0-60 sprint times similar to the original. Performance can be adjusted to suit the owner. Don’t let the classic look deceive you! This is a quick, capable car.

Push the throttle further, and the acceleration keeps on coming. It’s controlled by Mercedes-Benz R107 SportLine suspension and brakes. We used as much of the original R107 components as possible. The feeling and the aesthetic are closely linked to the overall experience.

The electric classic Mercedes still feels weighty, a key aspect of the R107. Have we lost the soul? Or have we created an all-new sensation? We’ll let motoring journalist Quentin Wilson answer that one. He was one of the first non-SLSHOP staff to drive the SportLine Zero:

“This electric SL can really shift… the sheer ingenuity of engineering this old Merc to drive so well on battery power eclipsed my nostalgia for its traditional powerplant… I was repeatedly struck at how captivating it felt’ (Excerpt from Classic Cars, April 2020 – read the full article here)

“What’s also quickly apparent is how natural it all feels, like the SL should have always been powered like this.” (Excerpt from Daily Telegraph, April 2020 – read the full article here)

We’ve gone the distance to build an electric-powered SL… Not just an electric car that looks like an SL.

Our 300SL SportLine has been featured in Octane and Mercedes Enthusiast Magazine, amongst others. Various classic car shows have displayed it. It’s also spent time at for classic car events around the country. Interested in the SportLine project? Want to discuss a SportLine restoration of your own SL? Do get in touch.

It began as our dream. It can now be your reality. The order books are open!
Before the ink dried on our electric car brochure, many around the world had caught wind of the SportLine Zero project and wanted to get involved.
Electric vehicles have moved firmly into the limelight. As daily drivers, they’re here to stay. Now, capital cities around the world have increased restrictions on emissions. But why let that impact your classic car enjoyment?
At the time of writing, 21 towns have low emissions zones. The trend is increasing across the world. European cities are embracing clean air zones and pushing petrol heads out of cities. We don’t believe this should be the end of classic car enjoyment. Instead, we see it as an opportunity. To make a statement of style, sophistication and forward-thinking.
A SportLine Zero project is a joint venture between SLSHOP and you. Just like our Mercedes SportLine projects. This isn’t an off-the-shelf product. It’s a custom build, set and finished to your exact requirements. The cabin, chrome, down to the way the car handles. Choose from a range of standard SL or SportLine touches, the finest materials, and custom colour palettes.
It doesn’t just have to be an R107 SportLine, either.

SportLine ZERO: For Everyone

Picture Paul Bracq’s Pagoda.
Drifting silently along the lawn at your local Rotary Club show. Hear the electric motor humming, with an air of dignity. All the while, packing more acceleration than even the 280SL managed.
Or the 1950s fashion icon, the 190SL.
A timeless shape, stylistically future-proof. Freed from the shackles of its ancient engine. Imagine this classic using electric power.
We have the expertise to build your dream classic electric Mercedes SportLine. An R107, a W113 Pagoda, a W121 190SL or something else… We have donor cars ready and waiting. The only limit is your imagination…
Should it be Nautic Blue, Classic White, Impala Brown or Icon Gold? Will you follow our lead on muted acceleration? Or would you like to be a bearer of traffic light surprises?
Ultimately, whatever path you choose, we’re excited to start working on your very own SportLine Zero. 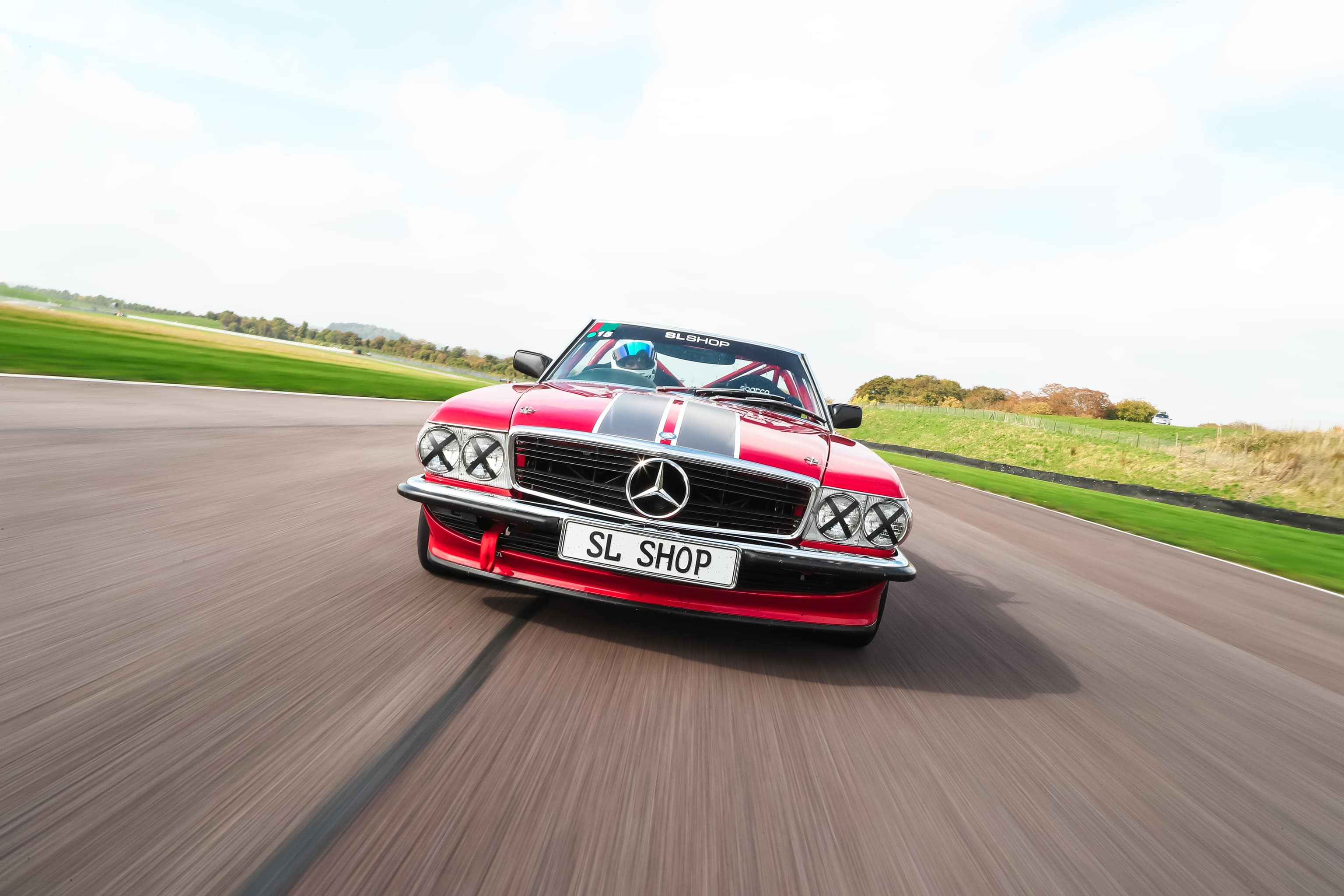 The paint had barely dried on our road going SportLine 300SL prototype before SportLine Racer plans were being hatched. 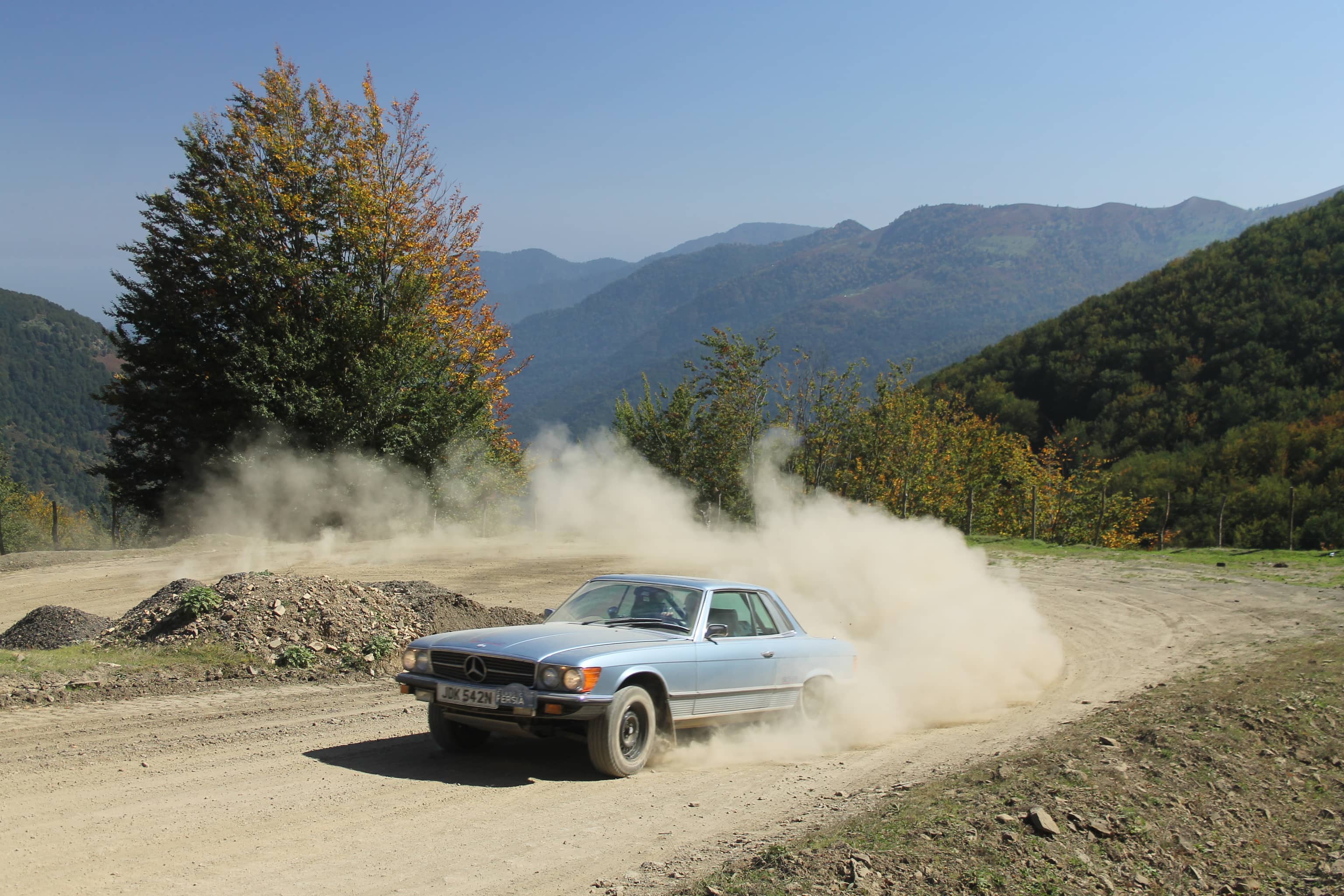 Wet, dirty roads, mud, dust and snow… Not exactly the natural habitat of a well preened R107 SL, but for international endurance racing, an SL makes the perfect contender. 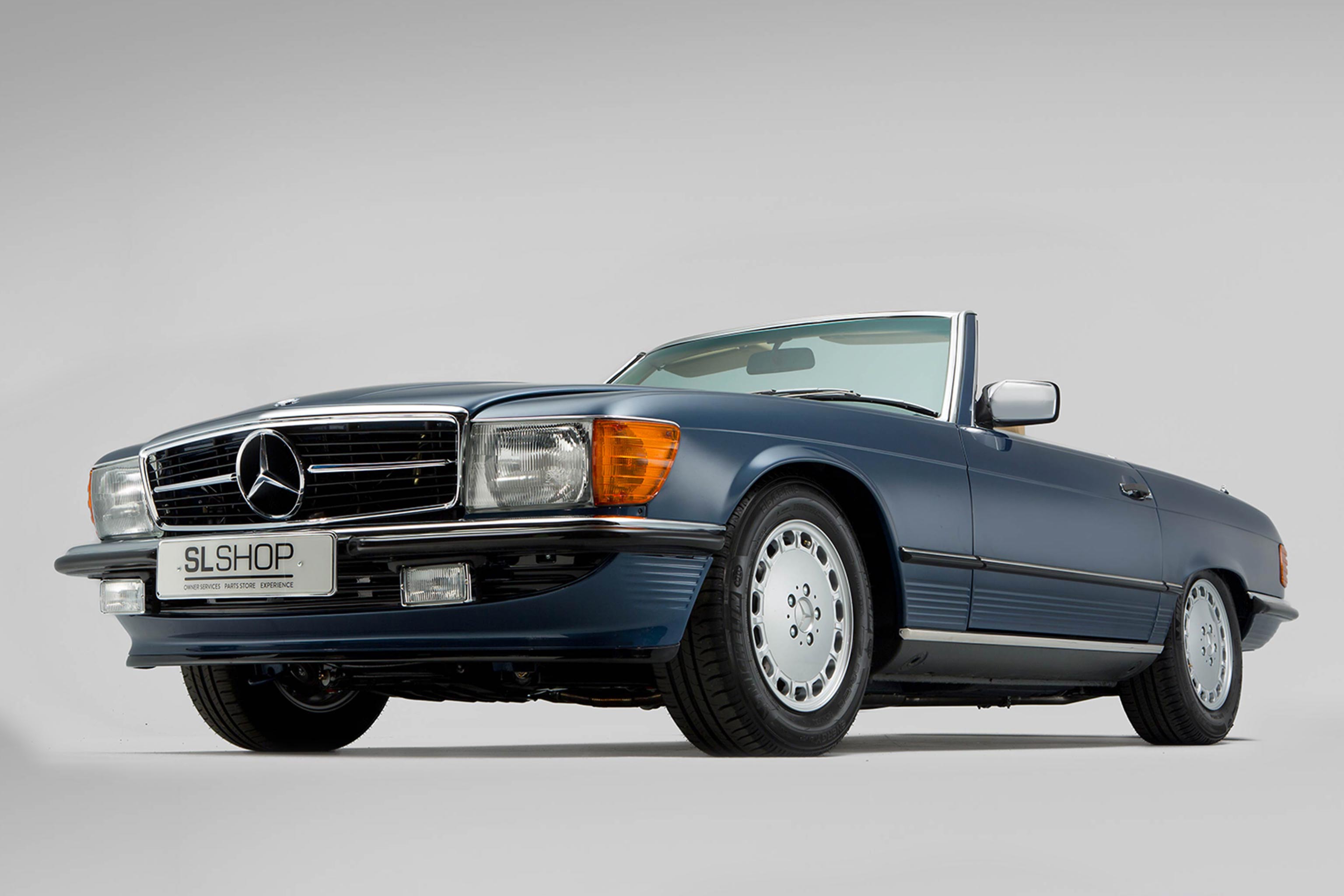 Long before our 300SL SportLine reached the pages of glossy magazines, when it was an unpainted shell and boxes of unfulfilled potential, we knew that a V8 SportLine had to be next – what we didn’t have at the time was the right customer.

At SLSHOP, we have up to 60 hand-picked models of classic Mercedes SL for sale at any given time. We’re the leading supplier of the R107 and W113 SL and one of the top classic Mercedes dealers UK. As such, we choose only the finest examples to add to our showroom.

All our cars are carefully selected on their merits. It takes something special to wear the SLSHOP badge of honour. That makes us the perfect place to get a Mercedes car valuation.

Bruce works tirelessly to match cars to customers. Can’t see one you like? Interestingly, some cars get sold before they reach the showroom. Contact Bruce to discuss your requirements. Or you can join us for a digital stroll through the showroom of Mercedes SL for sale here.

Whatever your Mercedes-Benz and your servicing needs, let SLSHOP help you. Firstly, we get know you and your needs. Because everyone and every car is different! So we’ve designed this contact form to be quick and easy. Secondly, we never share your data.

ENJOY YOUR VEHICLE WITH CONFIDENCE. PROTECT YOUR INVESTMENT FOR AS LITTLE AS £55.00 PER MONTH