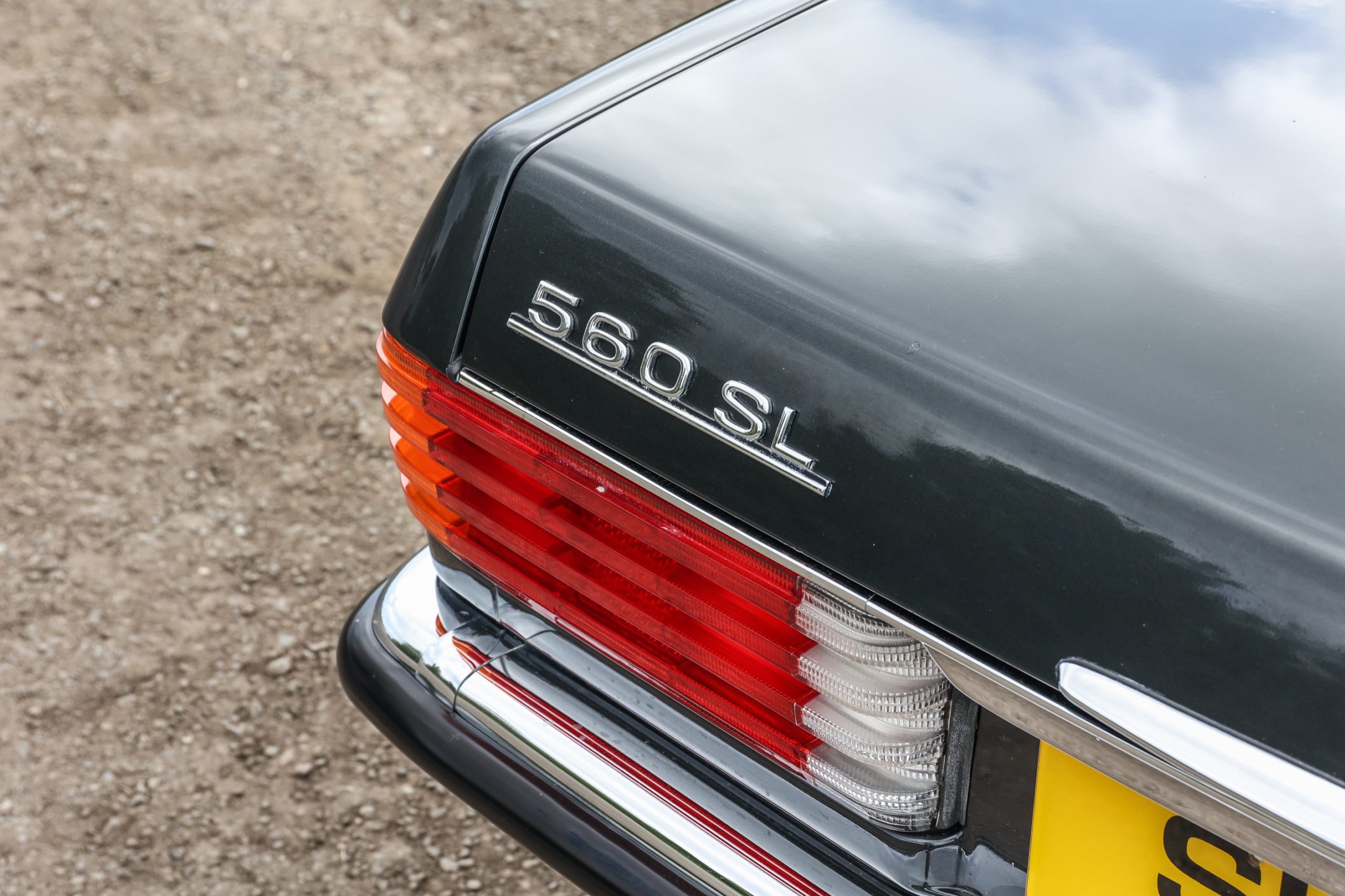 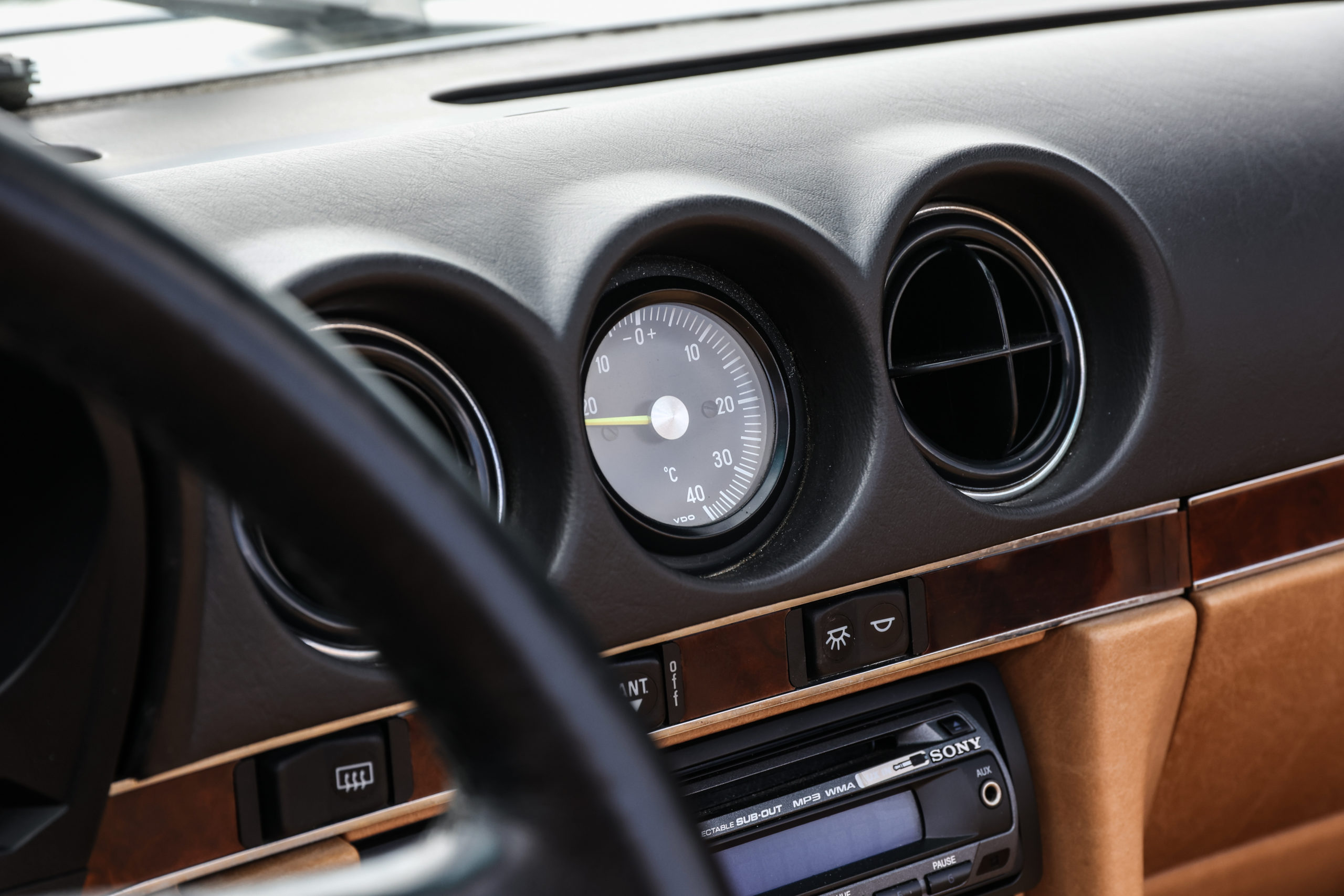 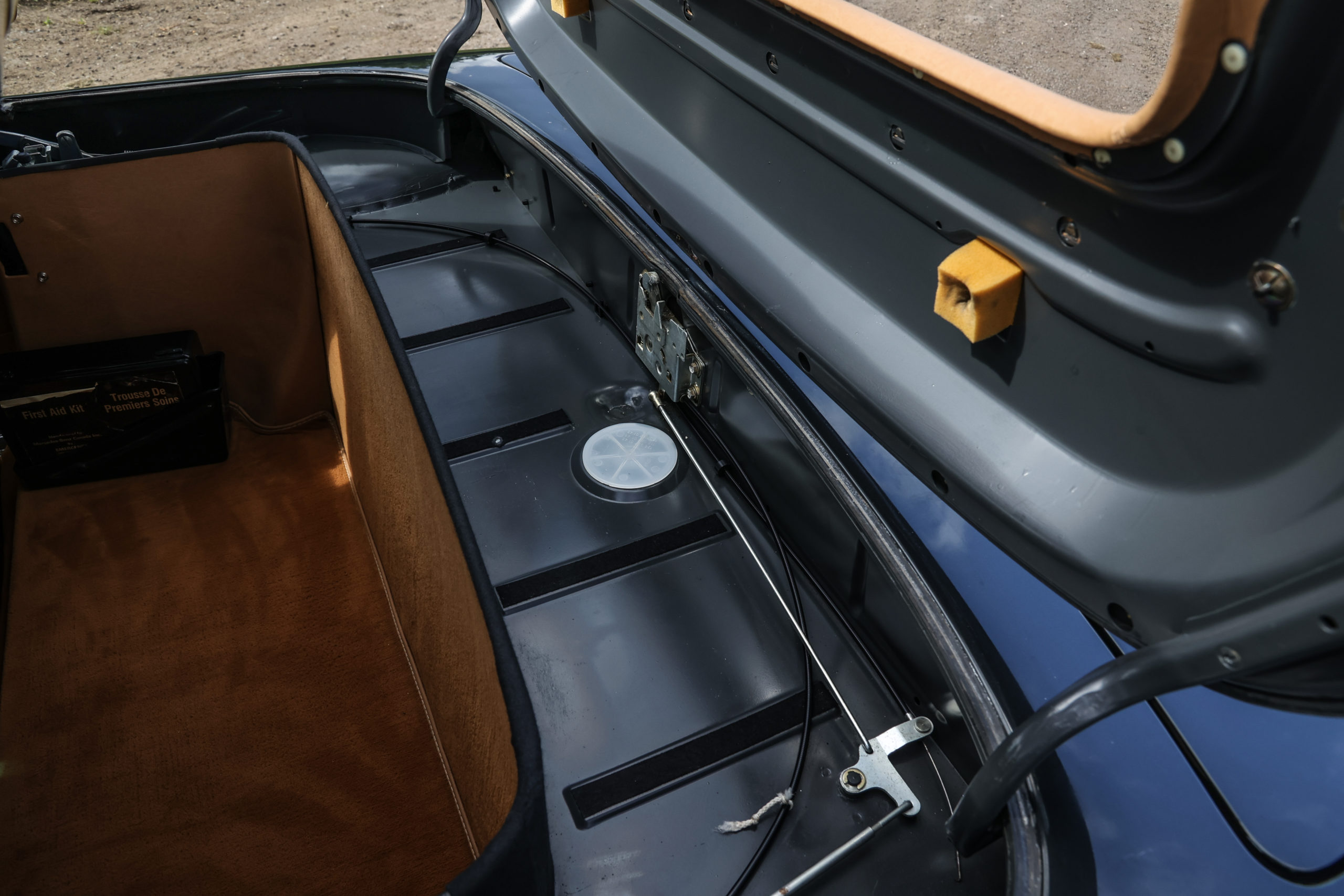 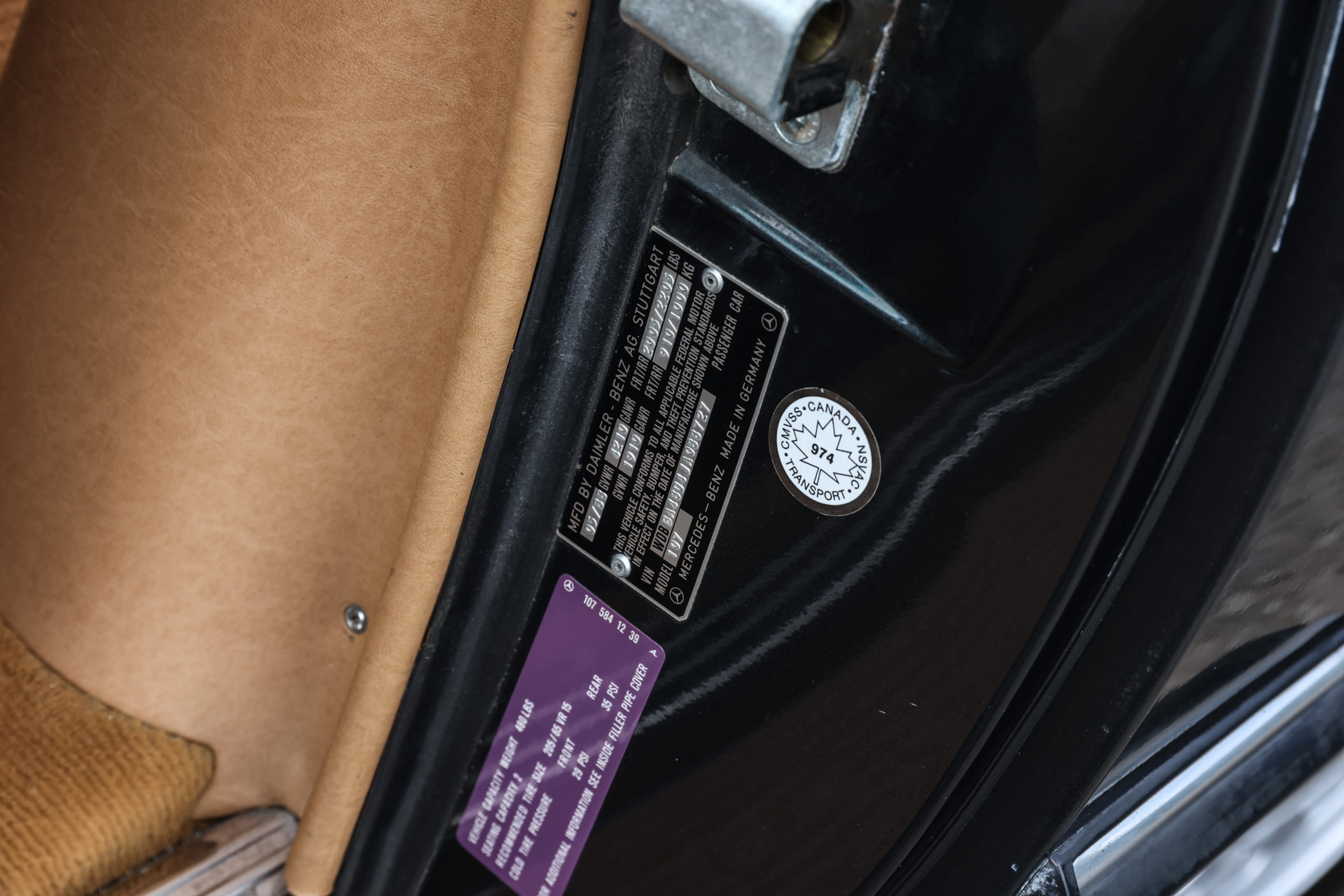 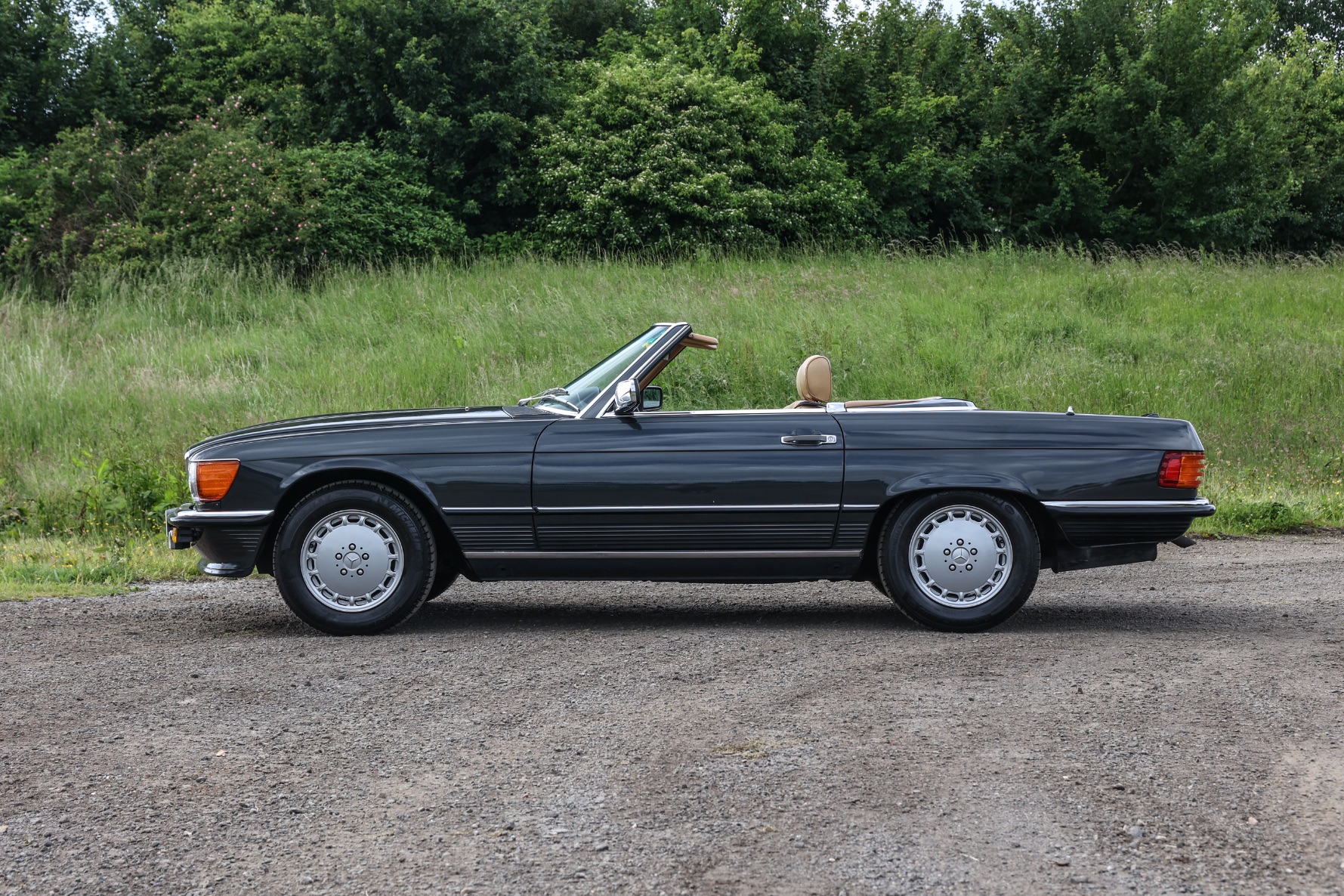 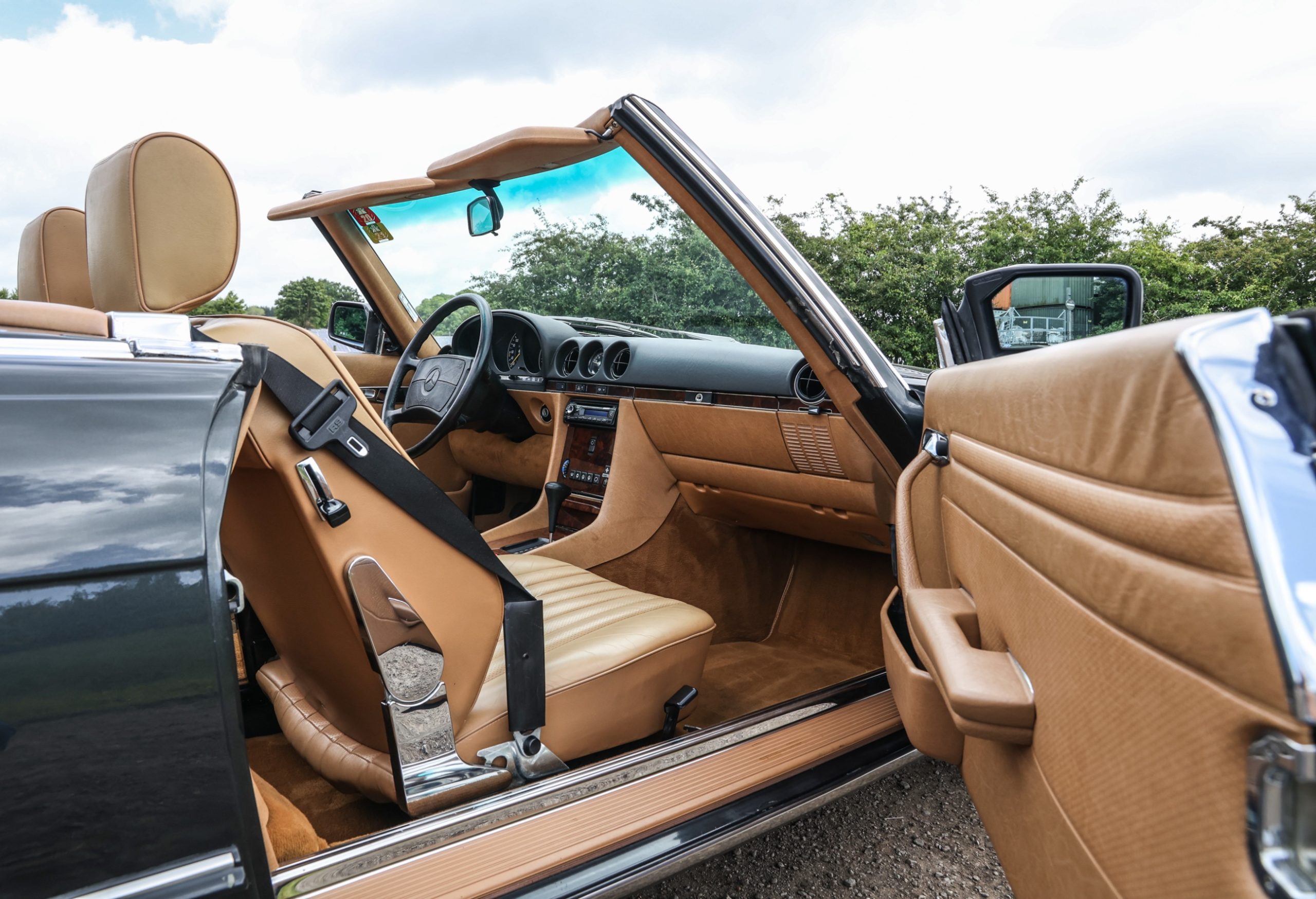 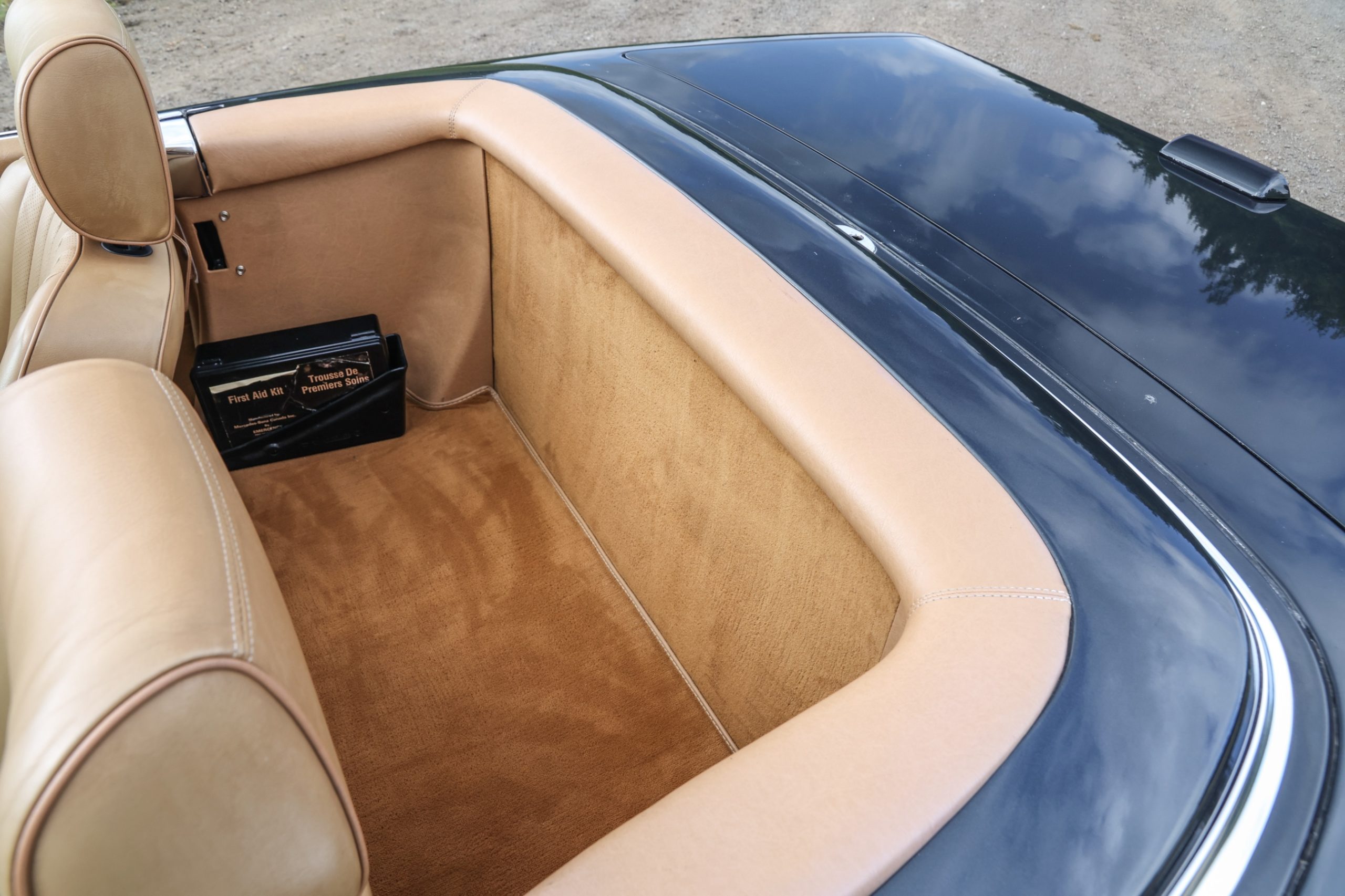 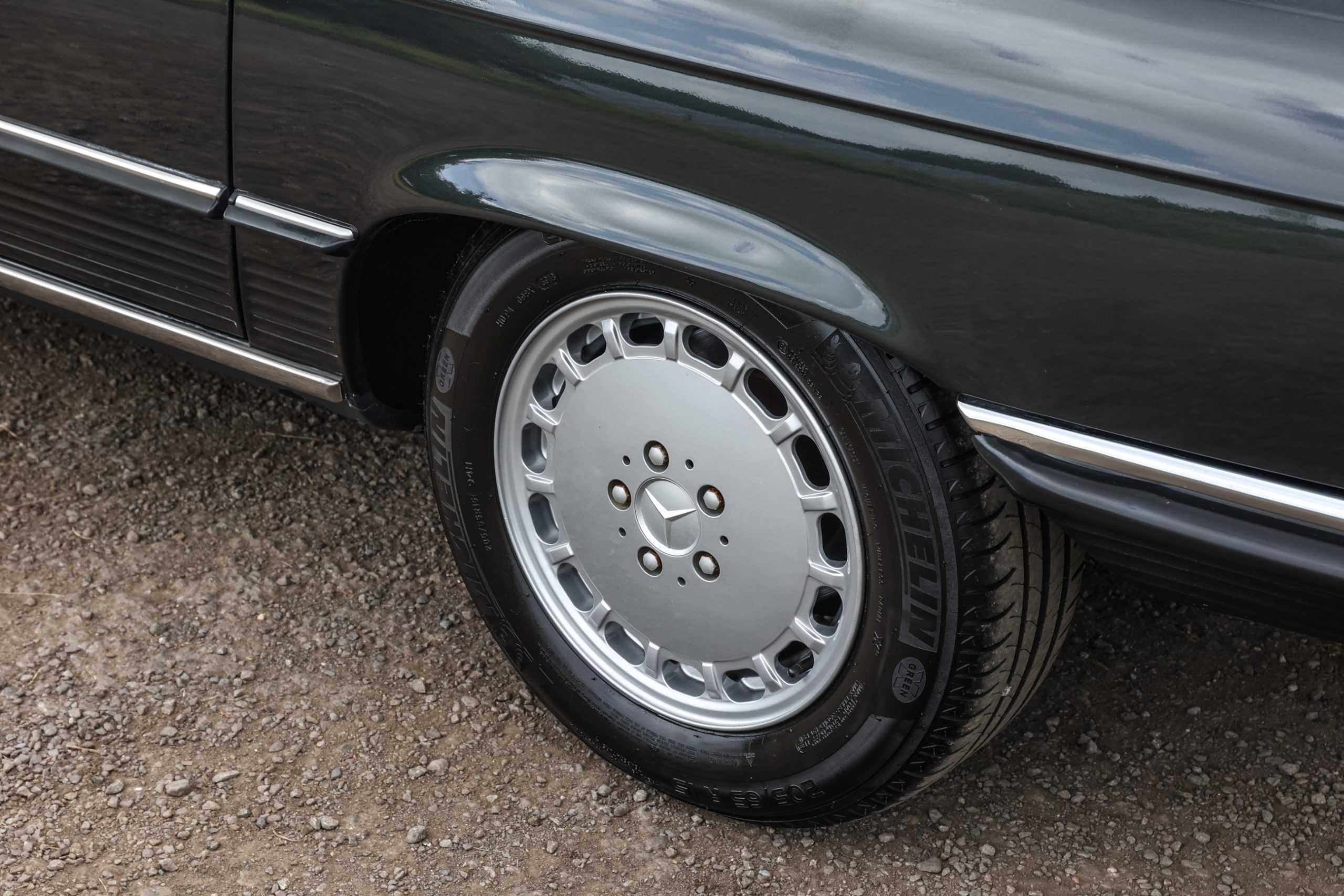 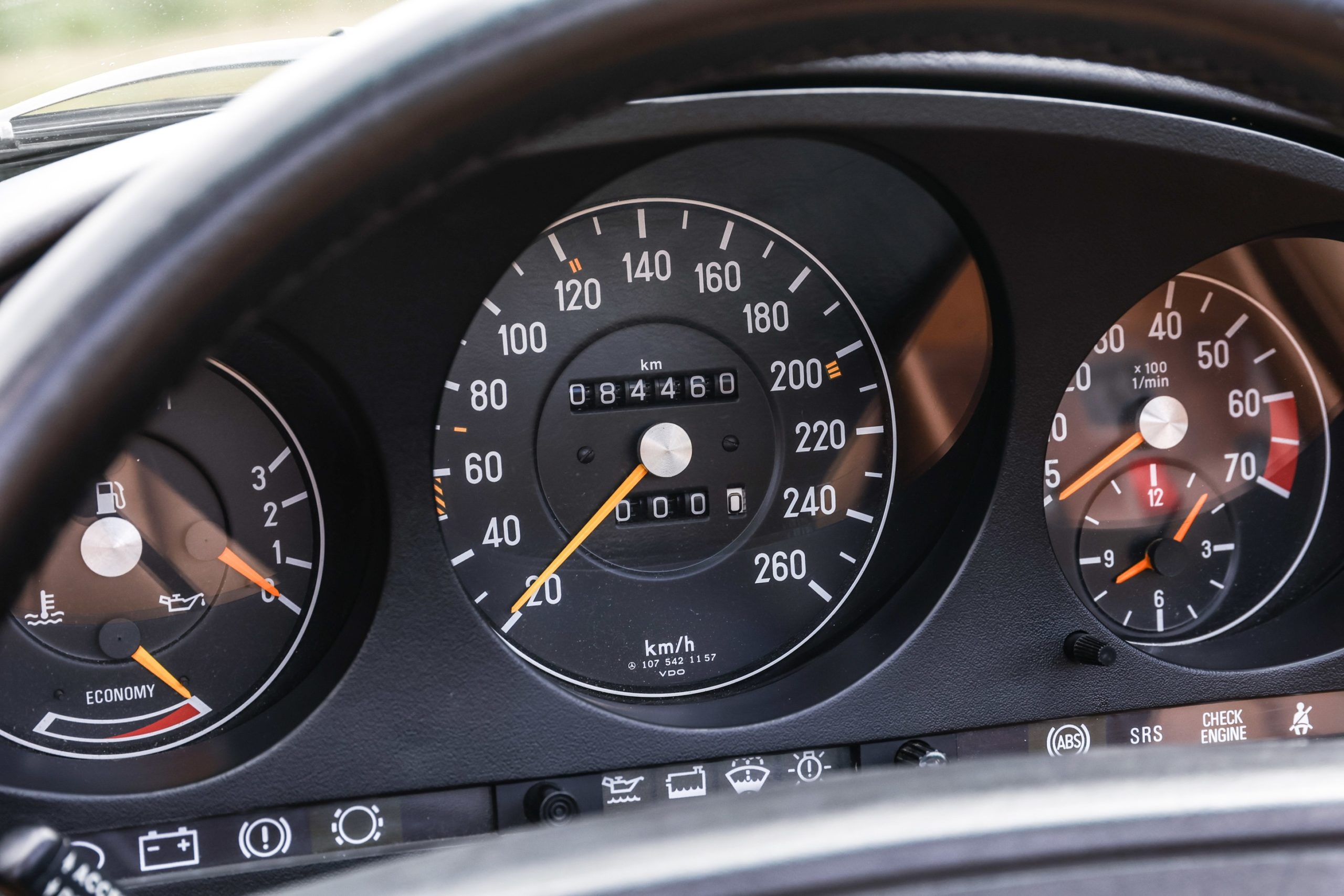 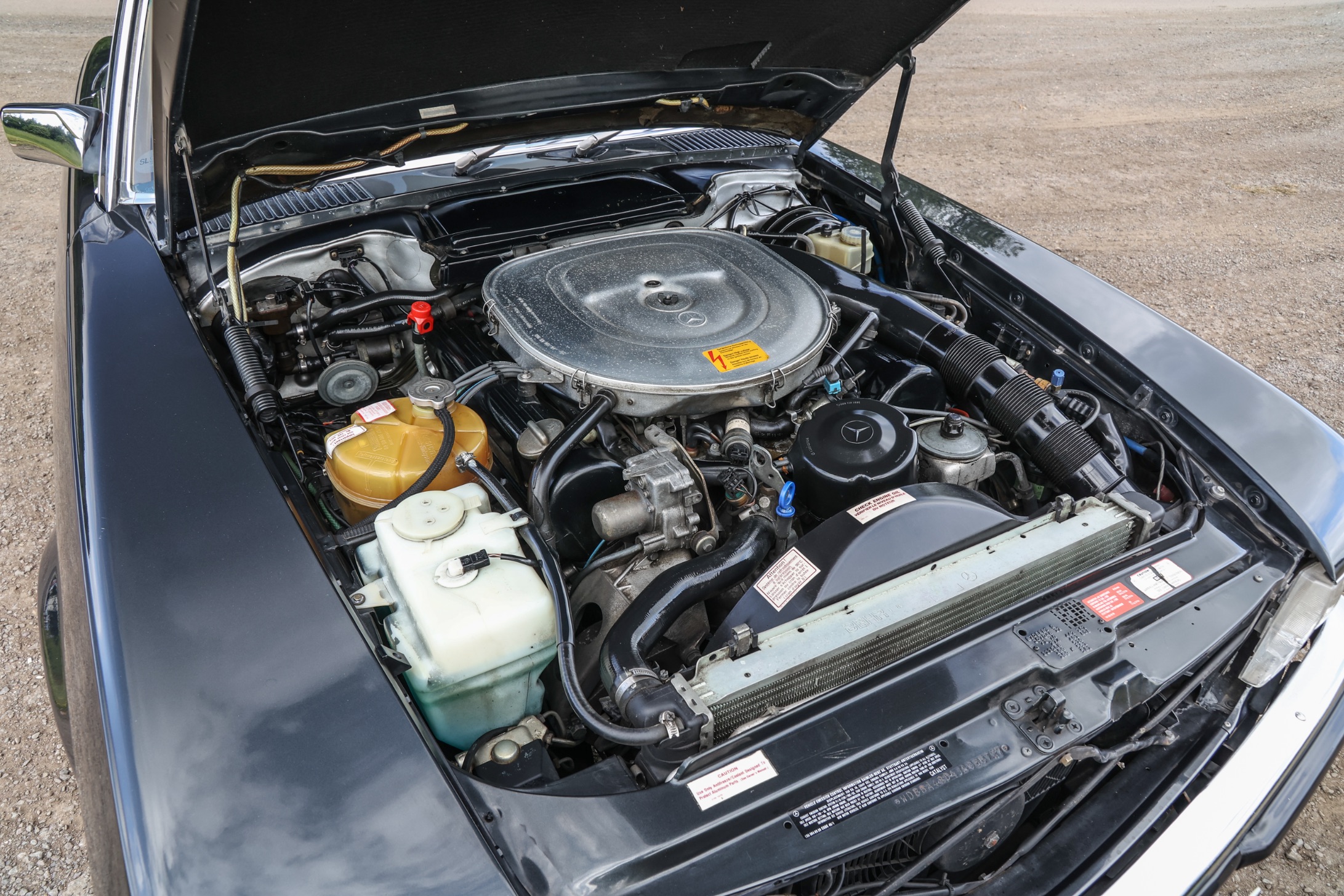 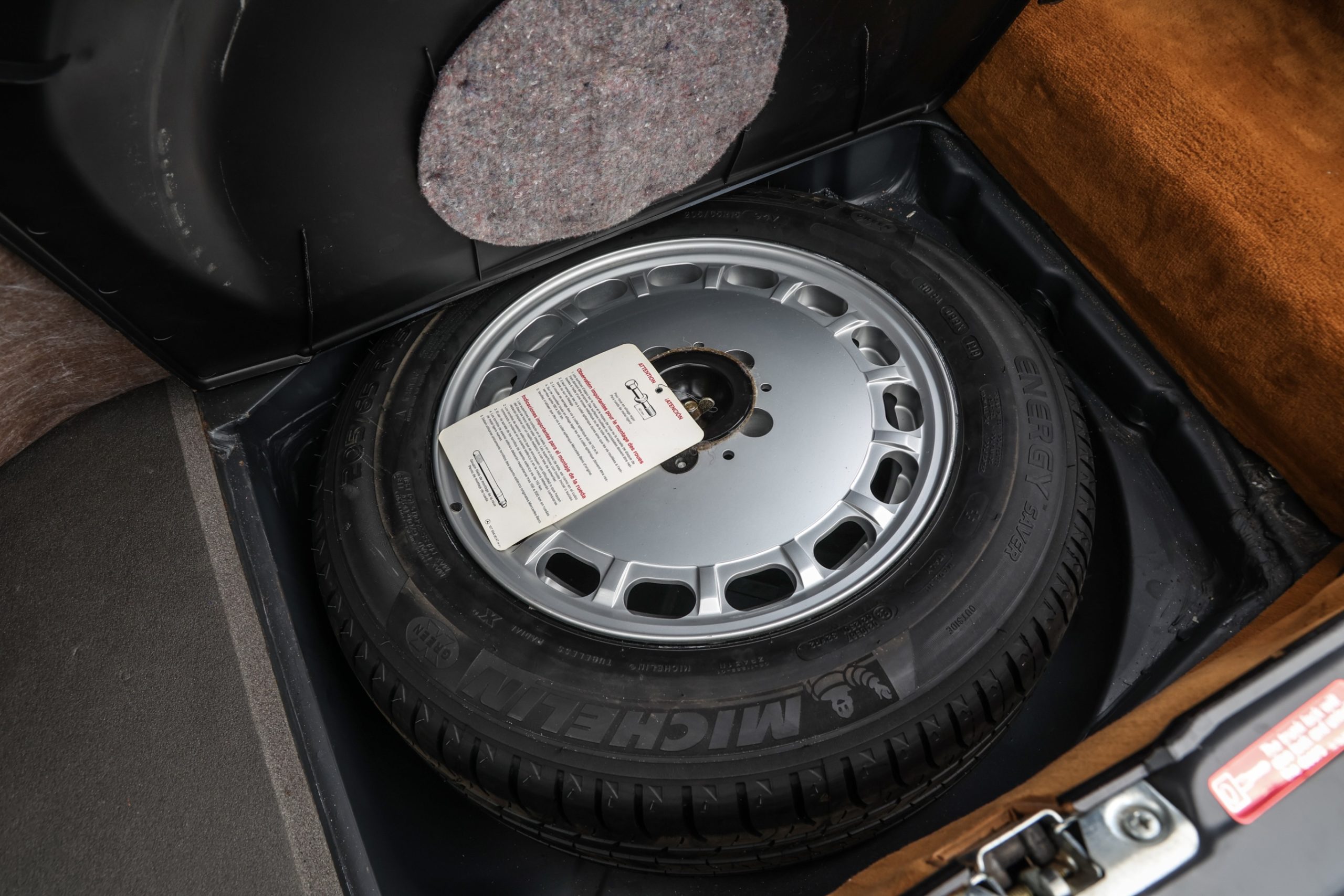 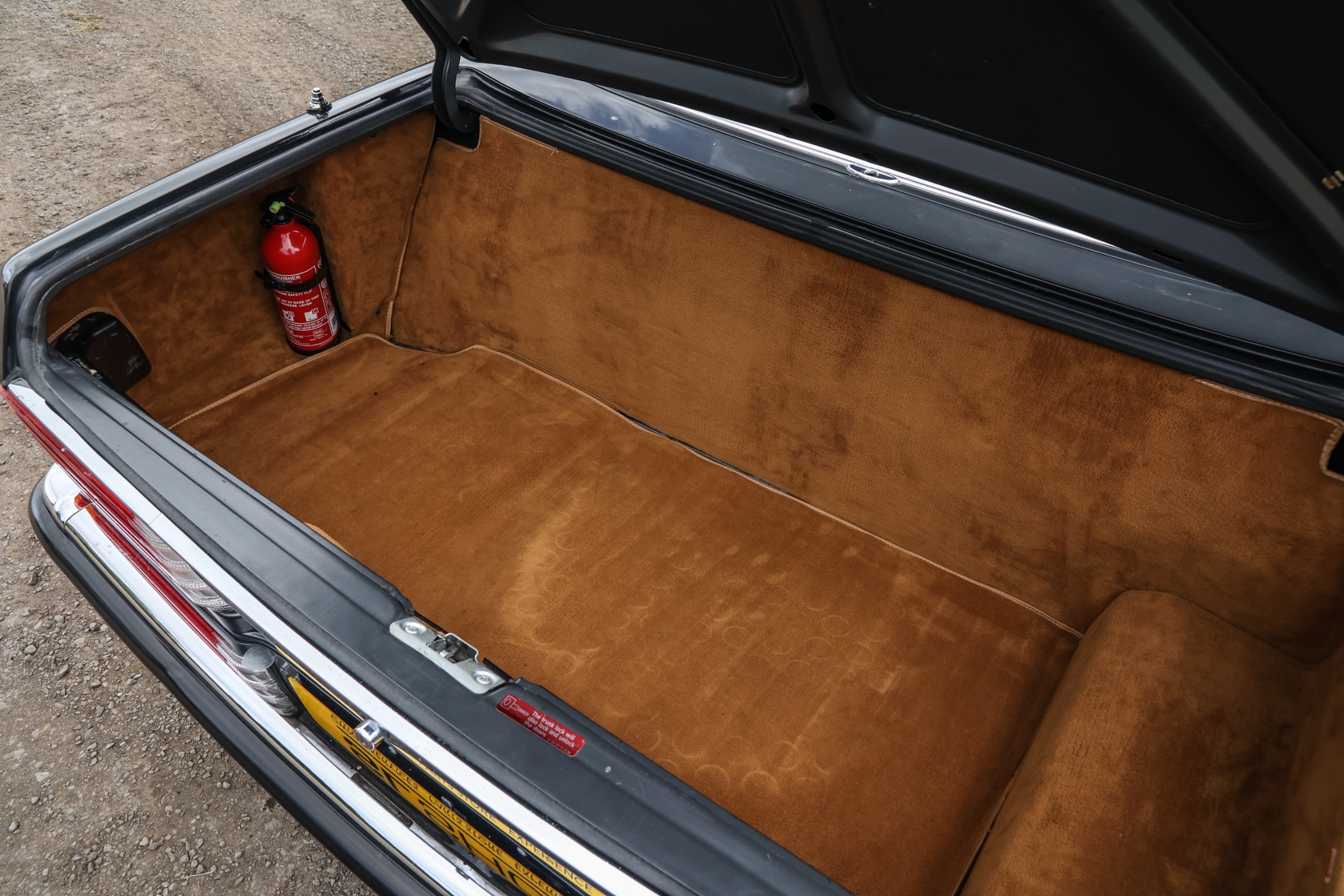 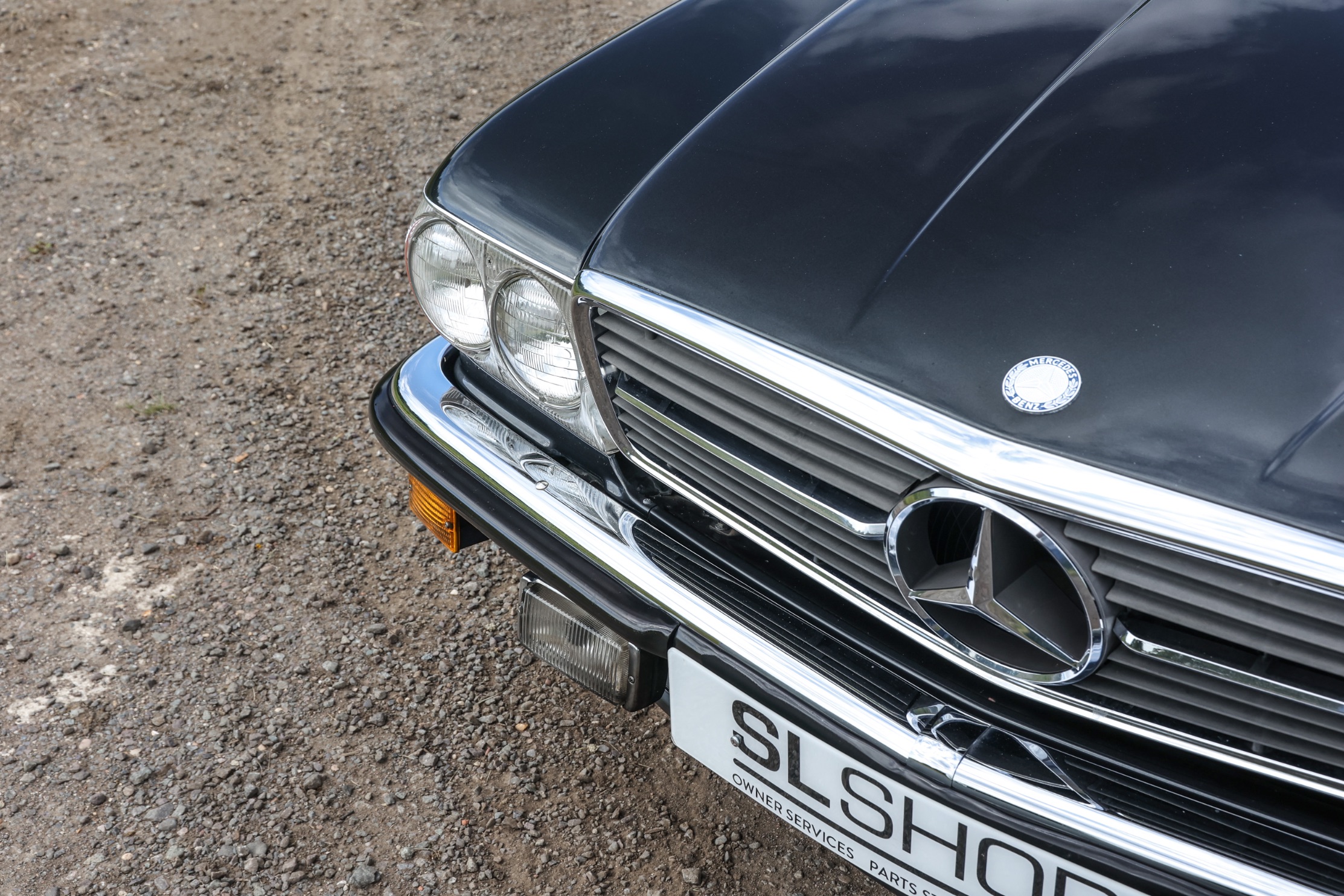 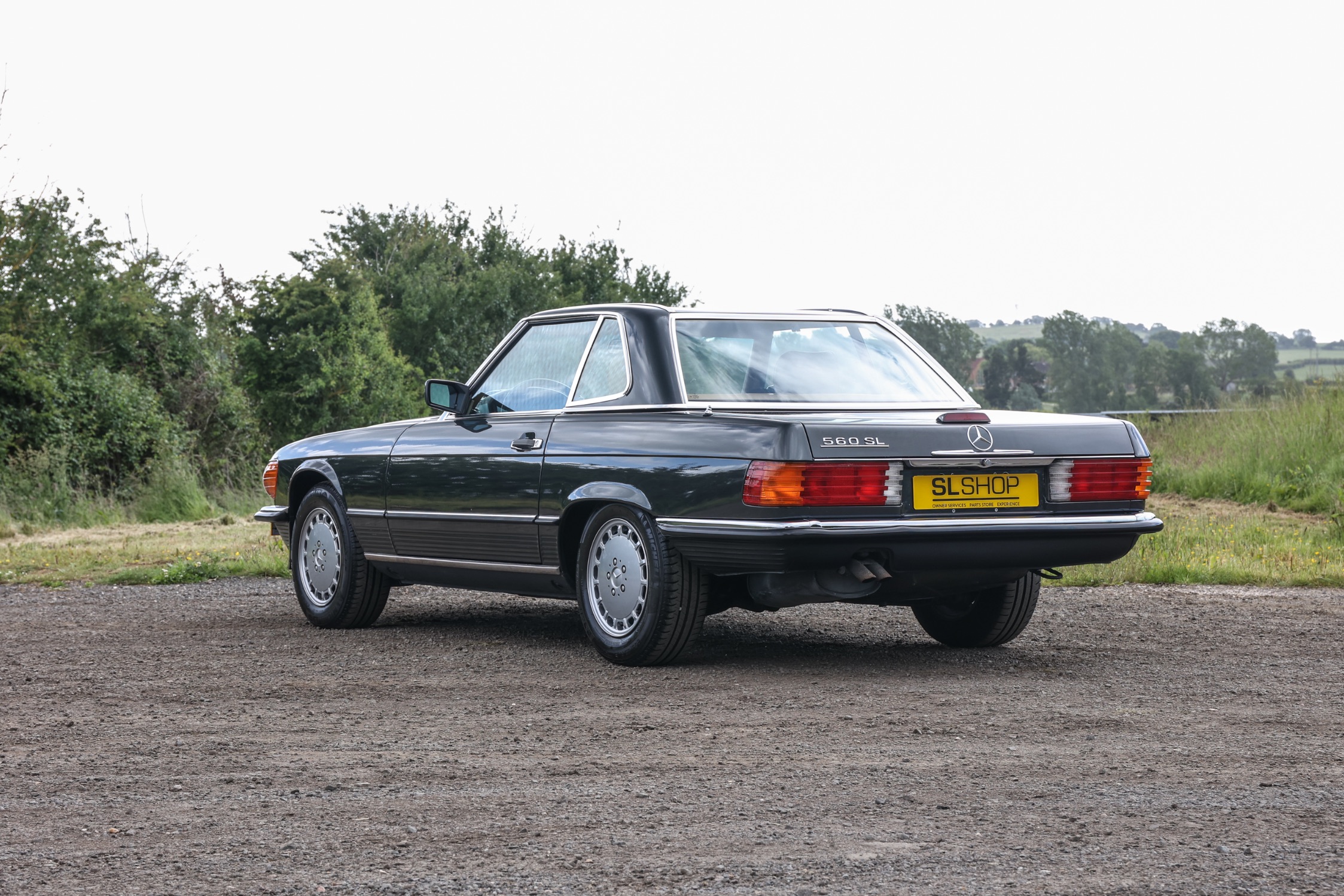 Registered in Toronto in 1988, this 560 SL is one of the last produced for the North American market, as the R107 SL was phased out not long after. Little is known about the vehicle’s life in Canada, other than that it was used regularly and accumulated over 50,000 miles in its first 7 years of life on the road. In 2018, the vehicle was imported to the UK by Mr Strachan in a container ship along with eight dining chairs.

The 560 SL arrived in 1985 in response to the US market’s disgruntlement that the European 500SL had more power than their equivalent… The result was the 5.6 litre R107 SL, producing 272bhp from the M117 engine – which was only available in the S-Class in European Markets. The 560 SL was only sold in Japan, North America and Australia.

The initial owner of this 560 SL opted for Blue-Black Metallic (199) – a more muted finish representative of the more conservative colour options found in the 1980s. Blue-Black Metallic was only offered from 1984 – 1989 and is rarely seen covering a 560 SL in the UK. The paintwork is in fair condition for its age, with some minor stone chips only noticed by the trained eye.

Most obvious to enthusiasts is the European specification. From factory the 560 SL would have been equipped with DOT-compliant rubber bumpers, quad headlamps and often a three-speed automatic gearbox. However, not long after arriving in the UK, the 560 SL was brought to SLSHOP for a Vehicle Health Check, after which the owner for our Euro conversion service, removing the excessive US bumpers, rewiring the front and rear lights and fitting new headlamps.

Inside the 560 SL sports a Palomino Leather (274) which is in beautiful condition with no stains or tears to the stitching. The leather has aged adding to the character of this cult classic. The 560 SL is a highly spec’d grand tourer, featuring automatic Climate Control, airbag, anti-theft alarm system, a folding central arm rest, outside temperature gauge and limited slip differential. Also present is an aftermarket Becker head unit for additional conveniences on the road.

With a fair mileage and high specification, this is an R107 SL to enjoy out on the road with friends and family. One to be used daily or enjoyed over the weekends. Whatever your preference, the eight cylinder muscle will propel you on your way with no qualms.

Please note the odometer is set to Kilometres, which is why the reading is circa 84,000.