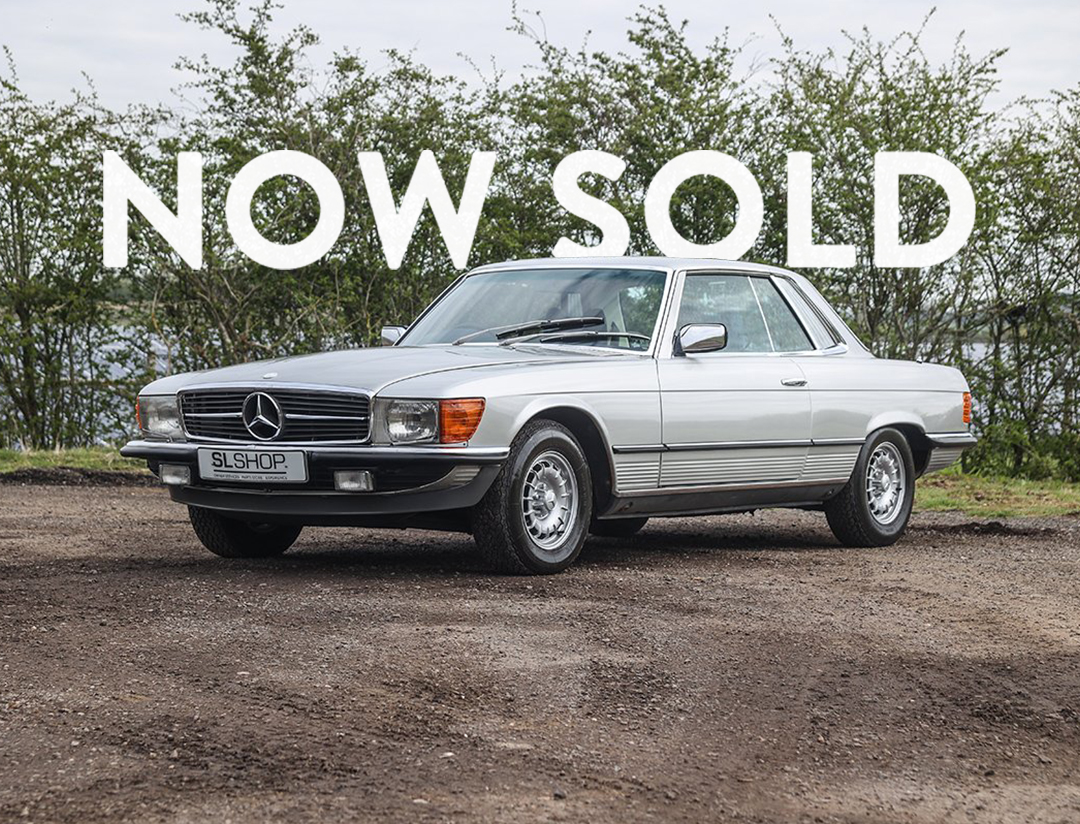 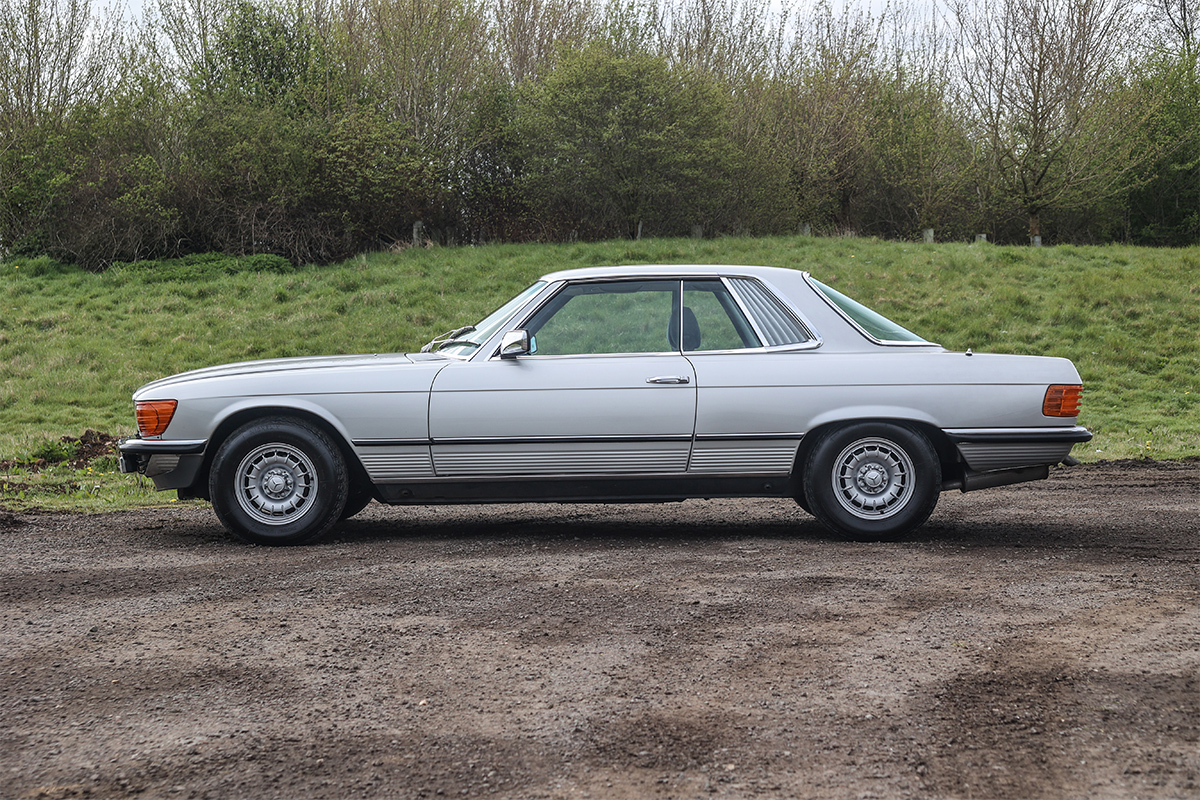 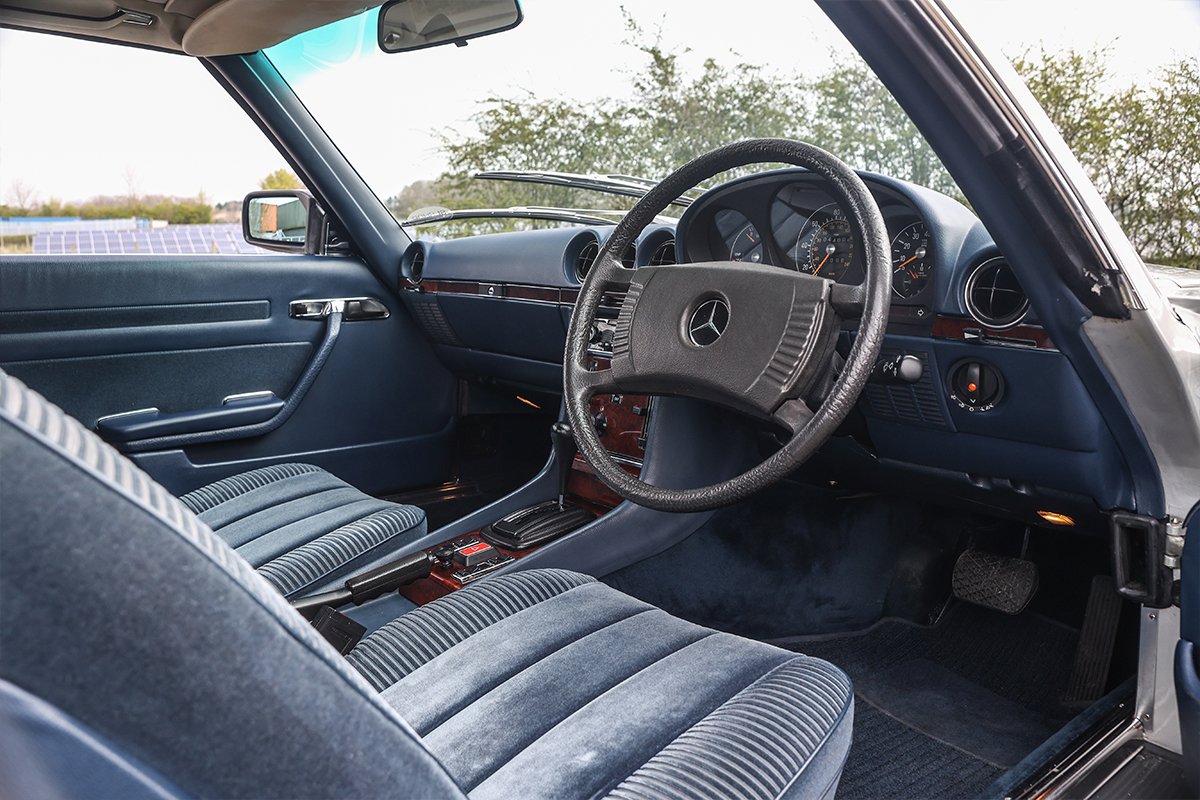 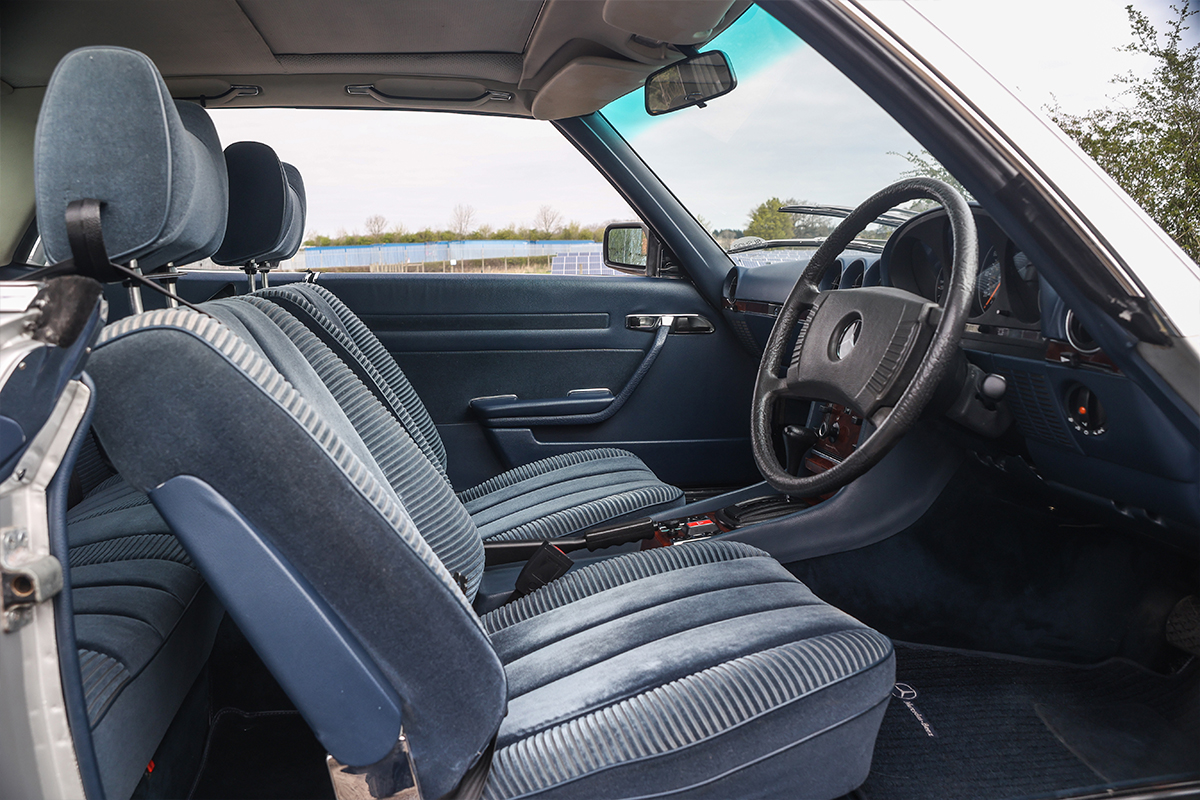 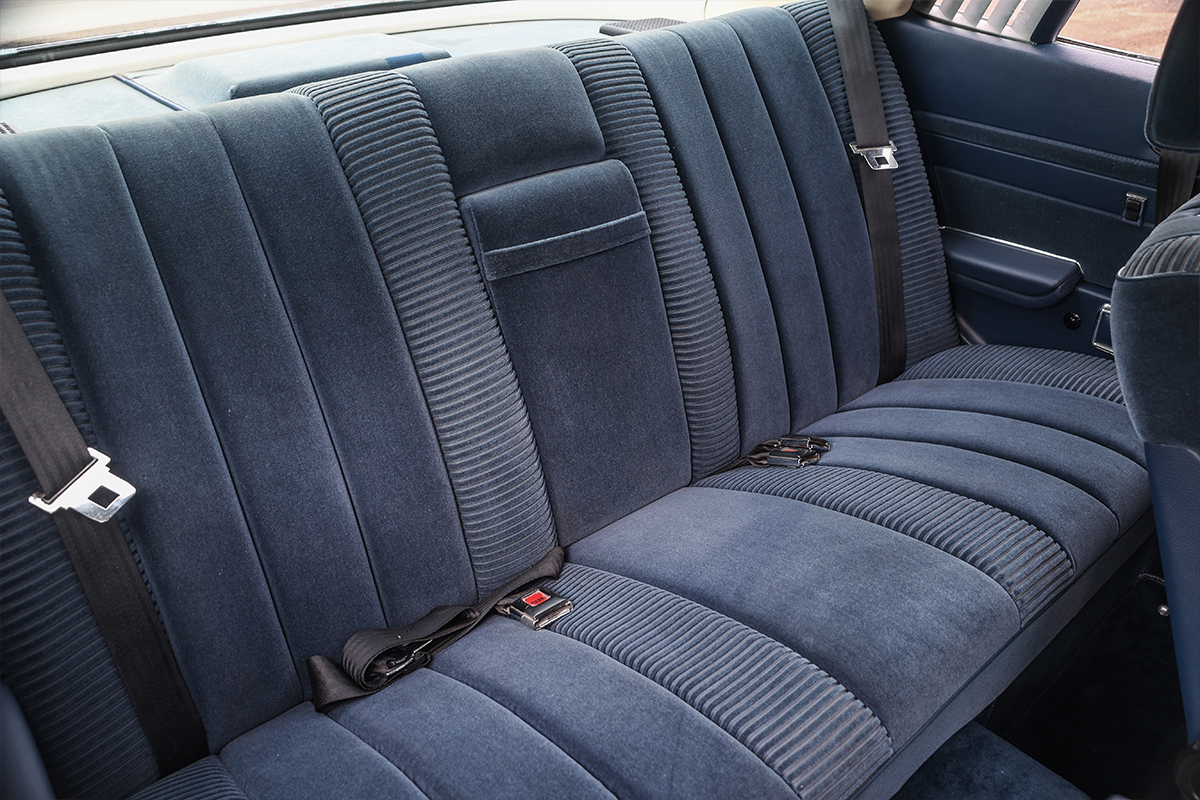 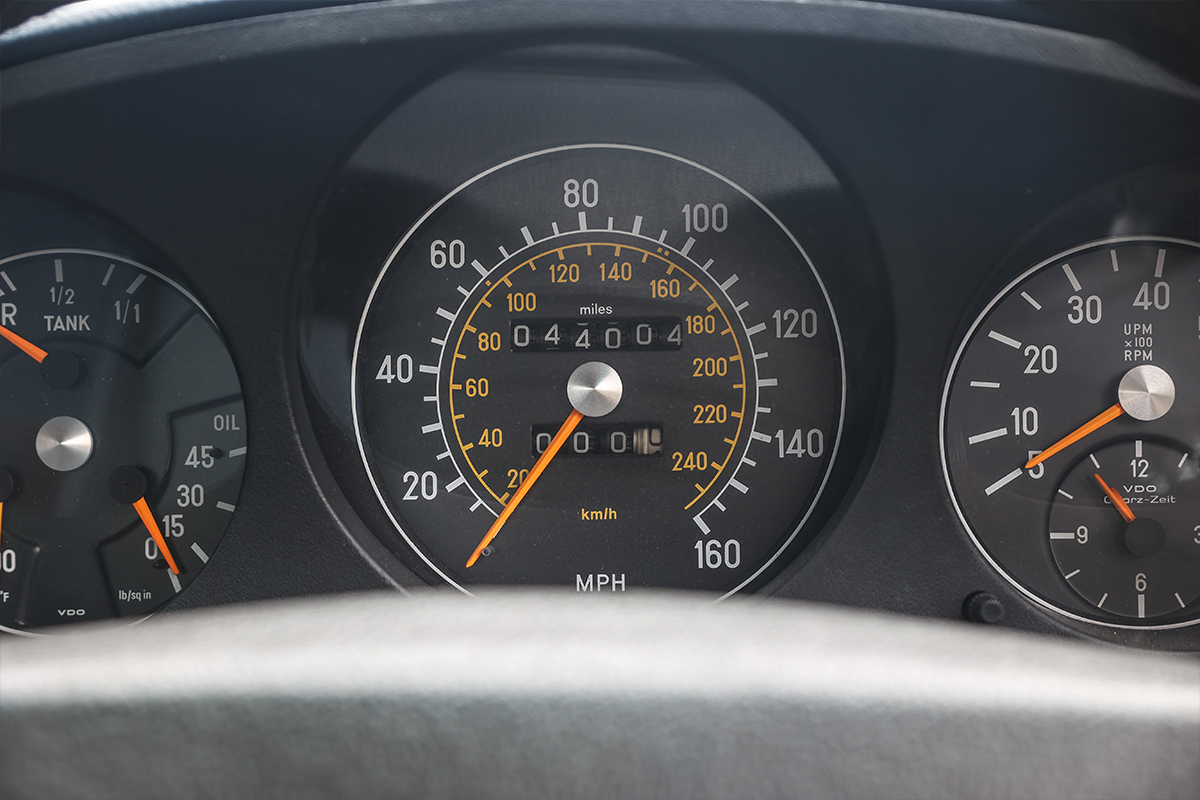 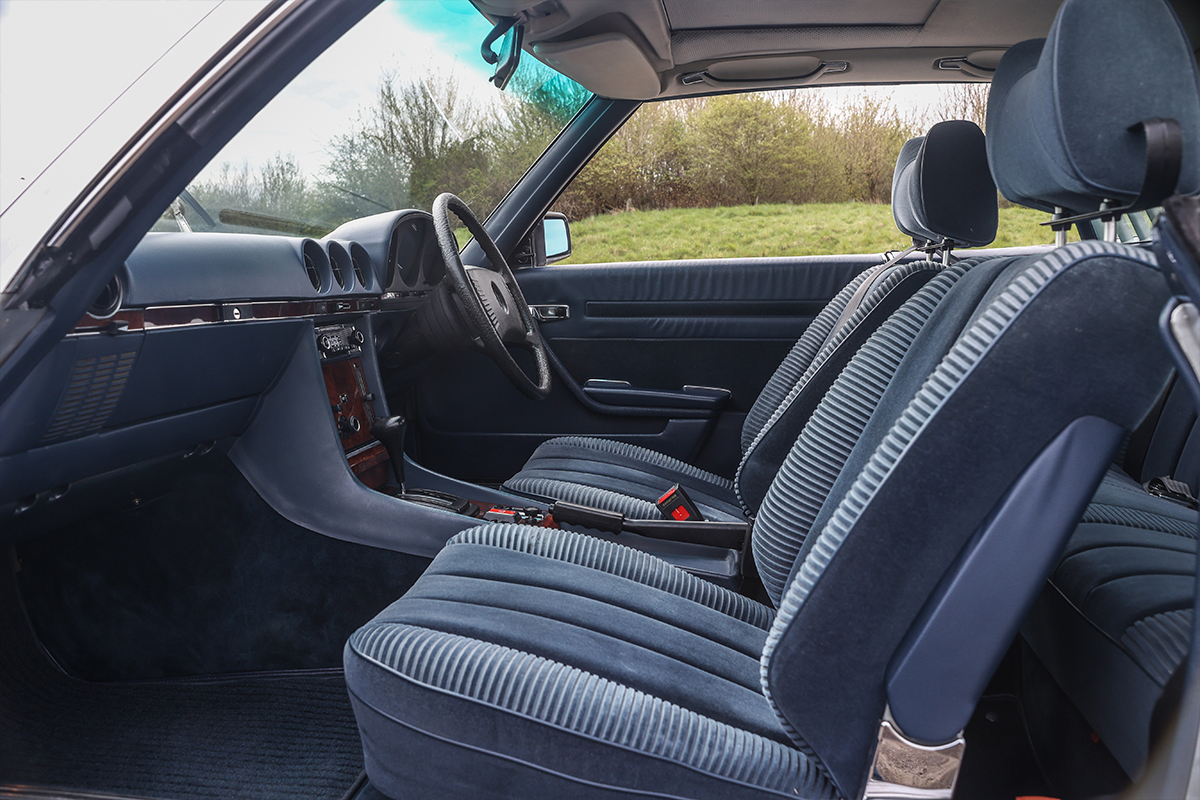 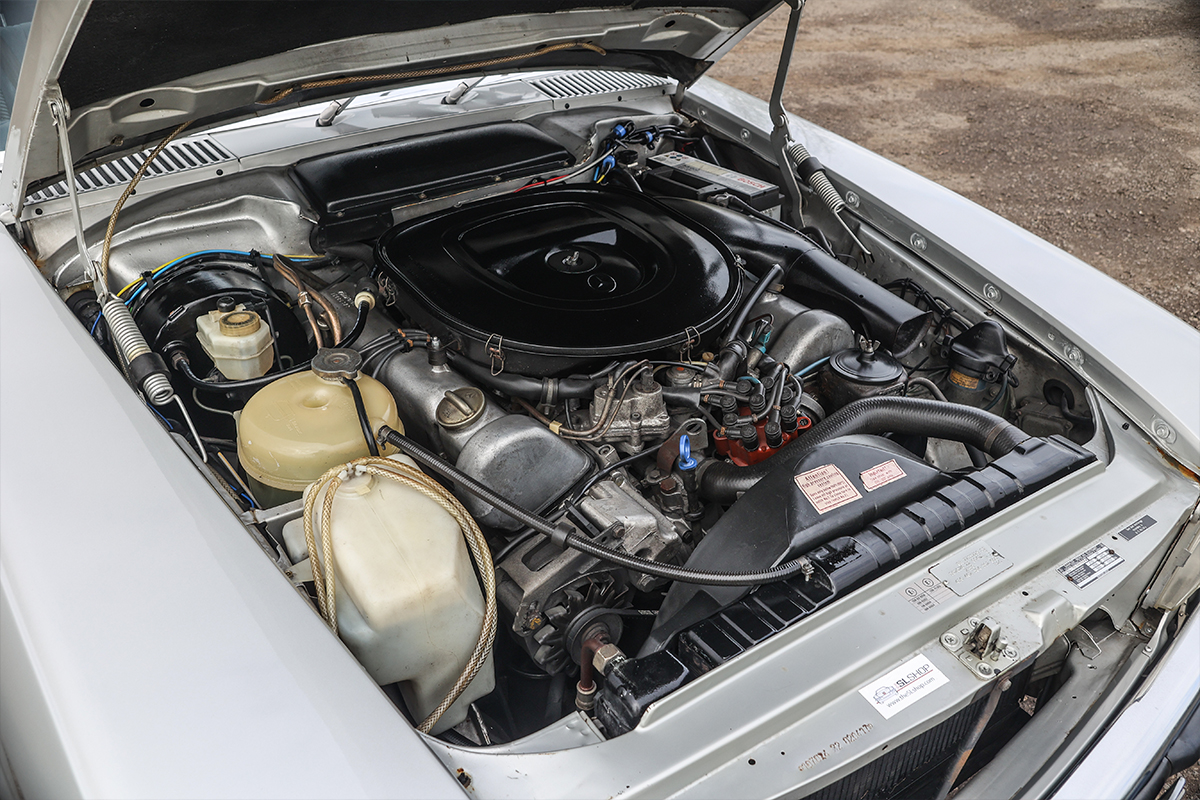 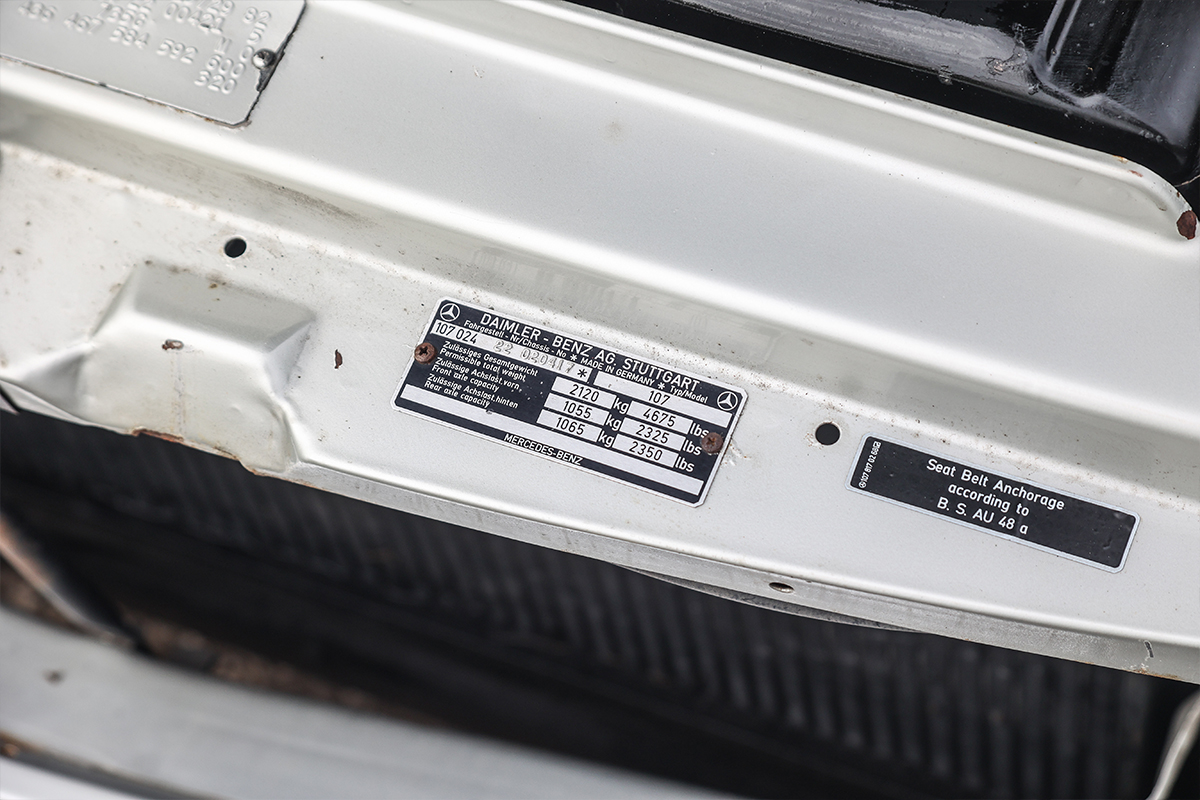 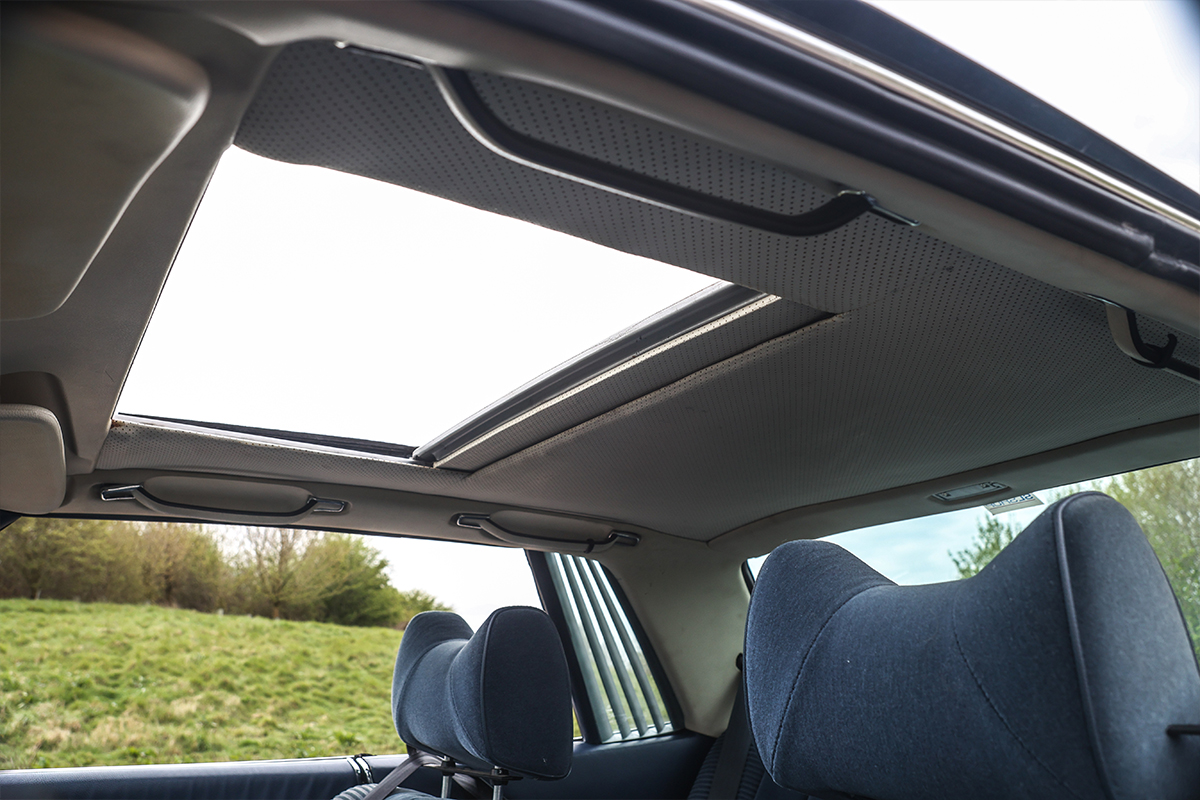 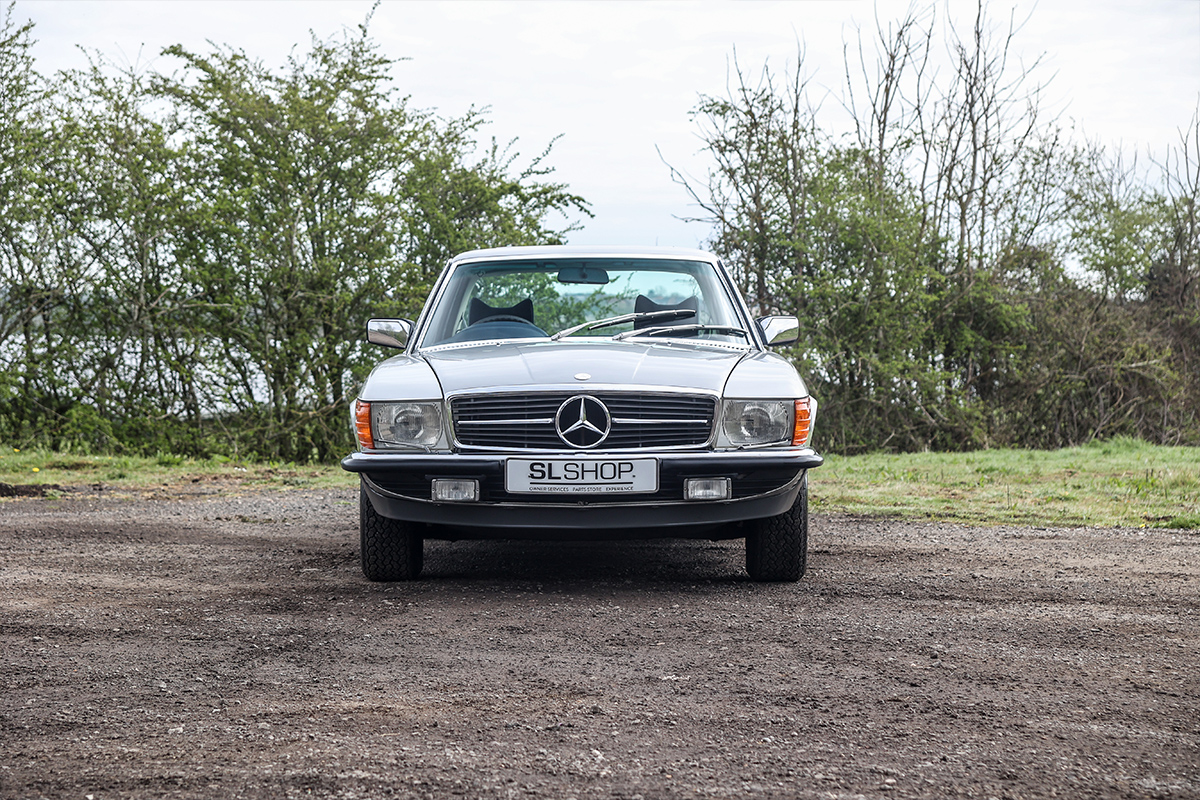 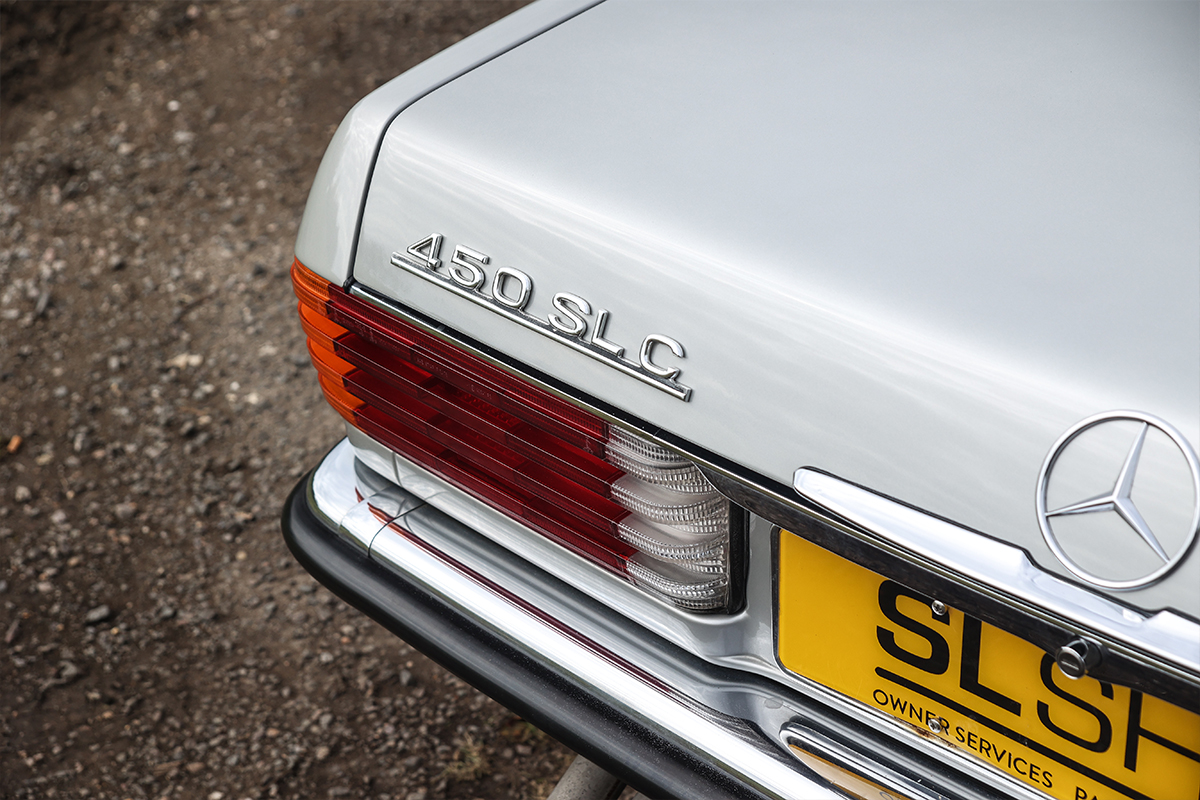 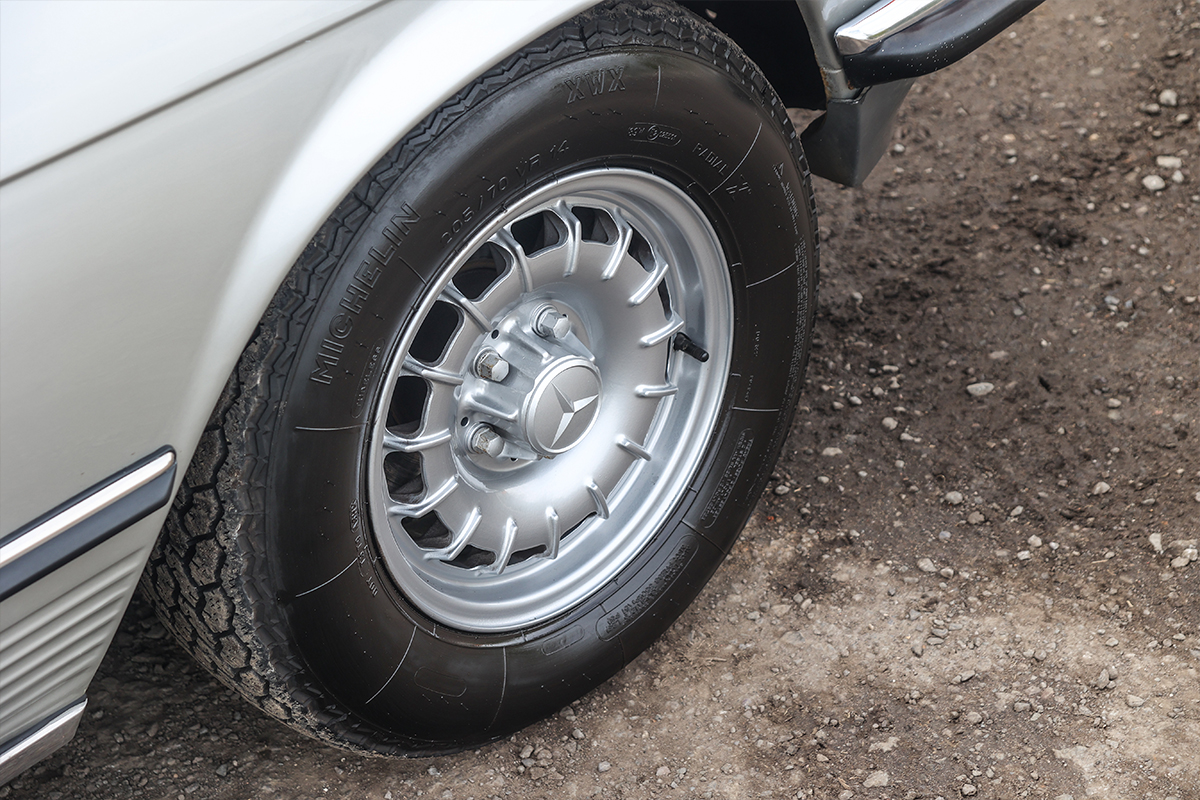 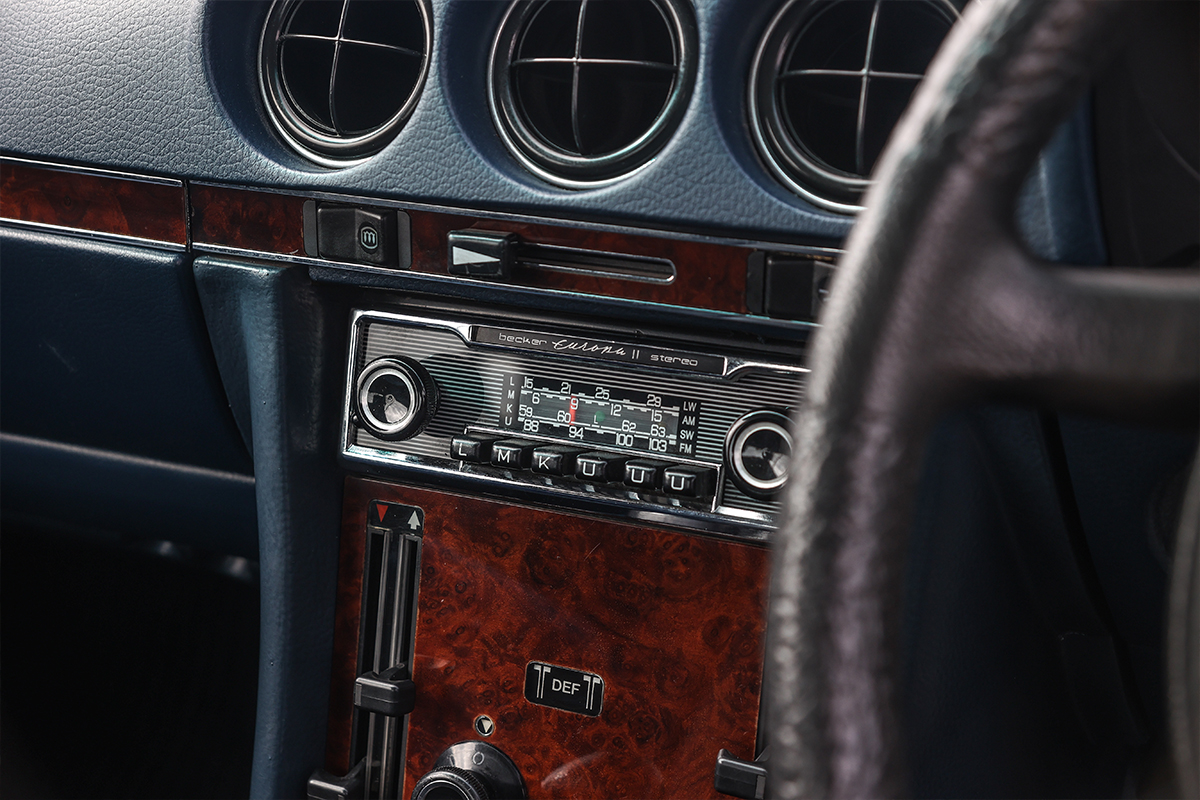 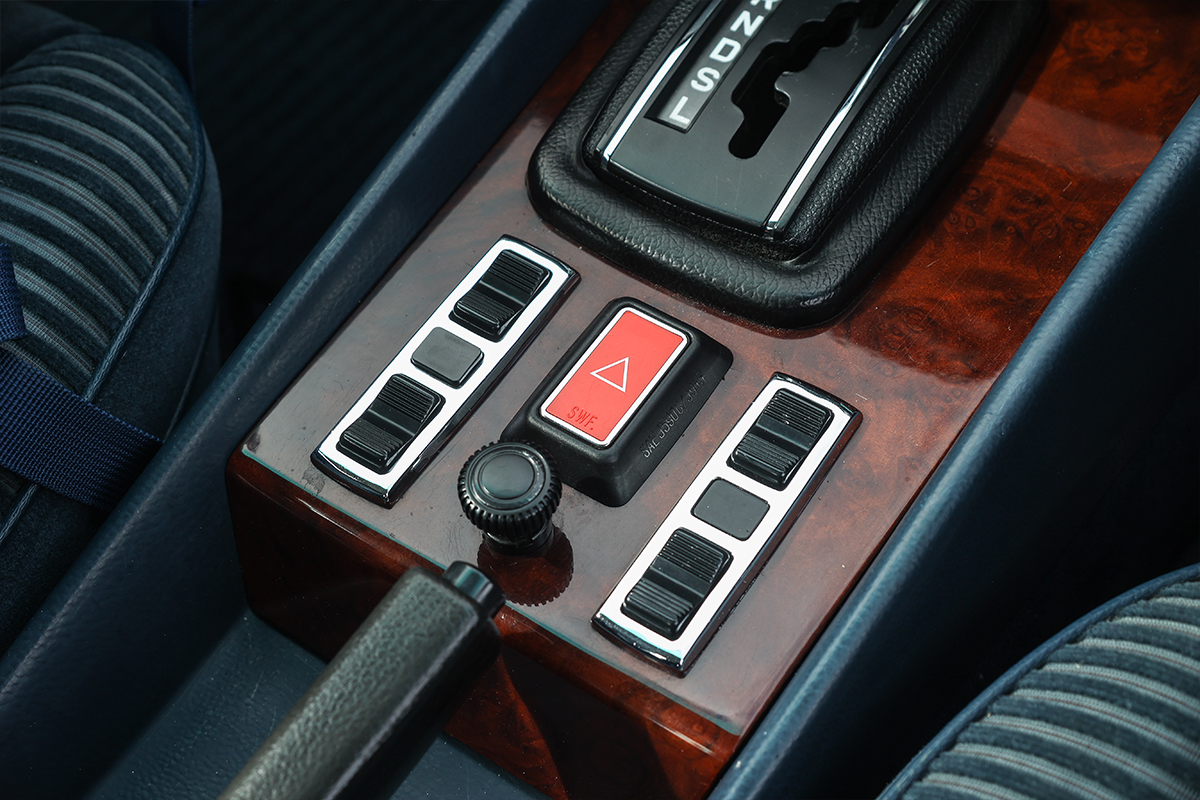 About the Mercedes-Benz 107 SLC:

Arriving in 1972, the SLC was an elongated hardtop coupe version of the popular SL. With it’s sleek body, pillarless windows and gigantic sunroof, it offered the very best of top down motoring with room enough for four. The V8 powered 450SLC was the first to arrive, with the 6-cylinder 280SLC arriving two years later in 1974. In 1979 the 450SLC was replaced by the 500SLC, and the 280SLC by the 380SLC. These more refined engines would enjoy a very short production run until the SLC was discontinued in 1981, the point at which the new W126 SEC took over carrying the torch as the flagship luxury coupe in the Mercedes-Benz range.

A high-calibre eight cylinder 450 SLC is a rare-sight on modern roads and within the classic car world also, making this SLC a very exciting prospect indeed. From 1978 up until 2011, the vehicle was owned by Engelhard Holdings Limited, purchased specifically for Mrs Engelhard who was a director at the time. During this 33-year reign of ownership, Mrs Engelhard covered a modest 33,500, cherishing the SLC and always sticking to a religious maintenance regime.

In 2011 the vehicle was sold by Michael Engelhard to Mr Roach who went on to cover very few miles before offering the vehicle to SLSHOP for us to sell on his behalf. In 2018, we sold this SLC to its current owner, Mr Mackintosh who has enjoyed the SLC using the car for a combination of leisurely local and continental drives. In his custody, the vehicle has received two SLSHOP service stamps, as well as two more from other reputable Mercedes-Benz specialists.

The SLC sports a reserved and timeless Astral Silver (877) exterior finish, paired with a quintessentially seventies Blue Velour interior. Over the years, the exterior has been subject to rectification work by our expert craftsmen, with restoration work carried out to the sills and floor pans, as well as a clean down and waxoyl of the bulkhead. Our team also returned the sunroof to its former glory which had stopped working due to age. All the works carried out by SLSHOP and other establishments is present with the vehicle’s folder.

For those seeking a period feel, the original owner opted for Blue Velour (735) fabric throughout the interior, which features a contrasting rib-style pattern on the outer sections of the seats. The original Becker stereo is in fully operational condition, as are all the modern conveniences, such as the electric windows, sunroof, and cigarette lighter. This is a luxurious space to reside and would make four occupants very comfortable for a weekend trip to the south of France.

Each owner of this SLC has gone to extensive lengths to keep physical evidence of the care taken to preserve and enjoy this SLC. Accompanying the car is a large folder of invoices detailing work carried out by SLSHOP and other organisations, as well as a beautiful leather wallet with all the original owners’ manuals. This includes the original service stamp book as well as the European service centre guide.

This is a unique opportunity to acquire a well-cared for classic Mercedes-Benz coupe – one that is hard to find in good condition simply because the SLC wasn’t regarded (until now) as highly as its roadster sibling. With two keys and genuine provenance, you should seriously consider this as your new commuter car or weekend adventure vehicle.