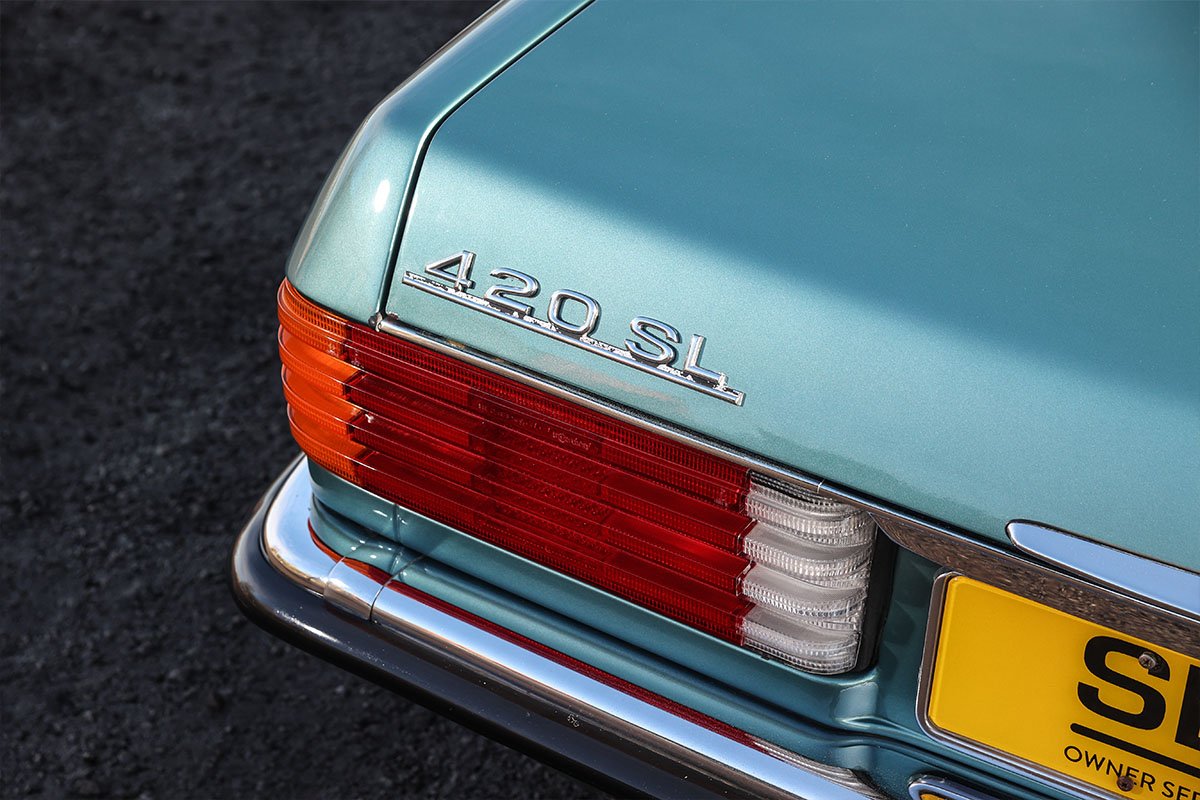 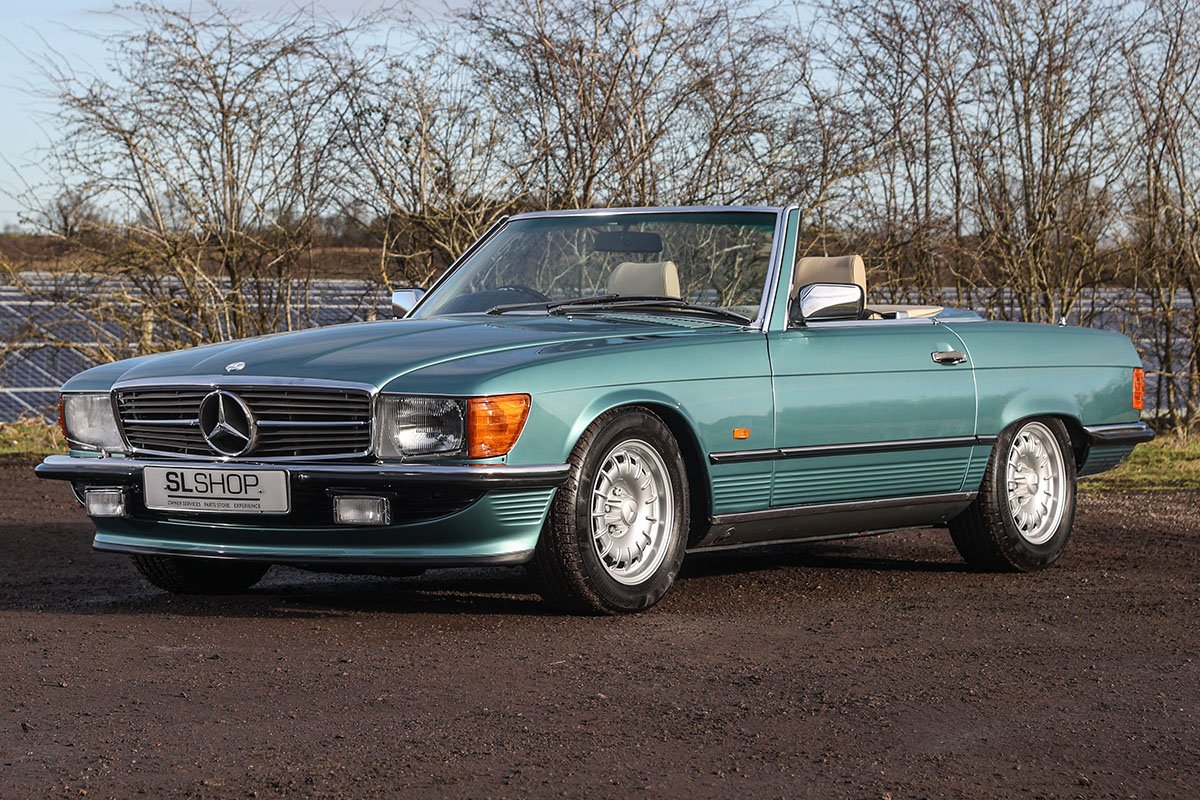 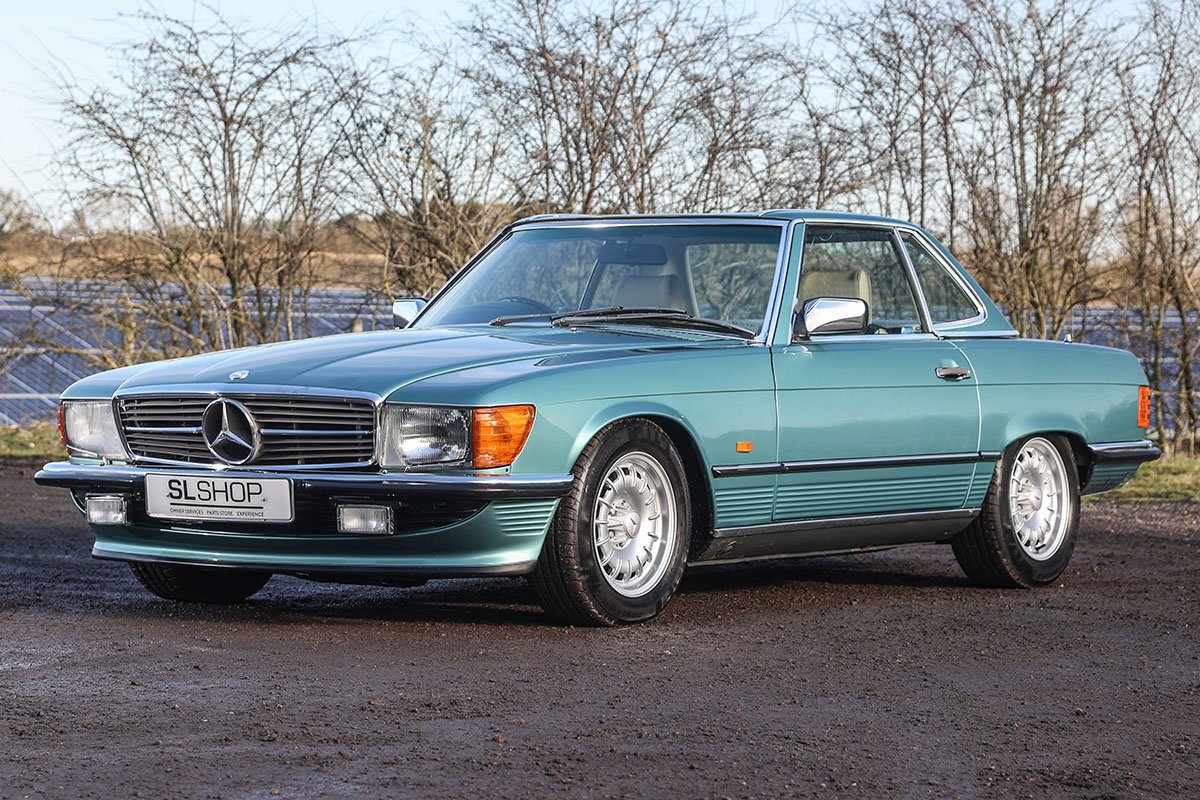 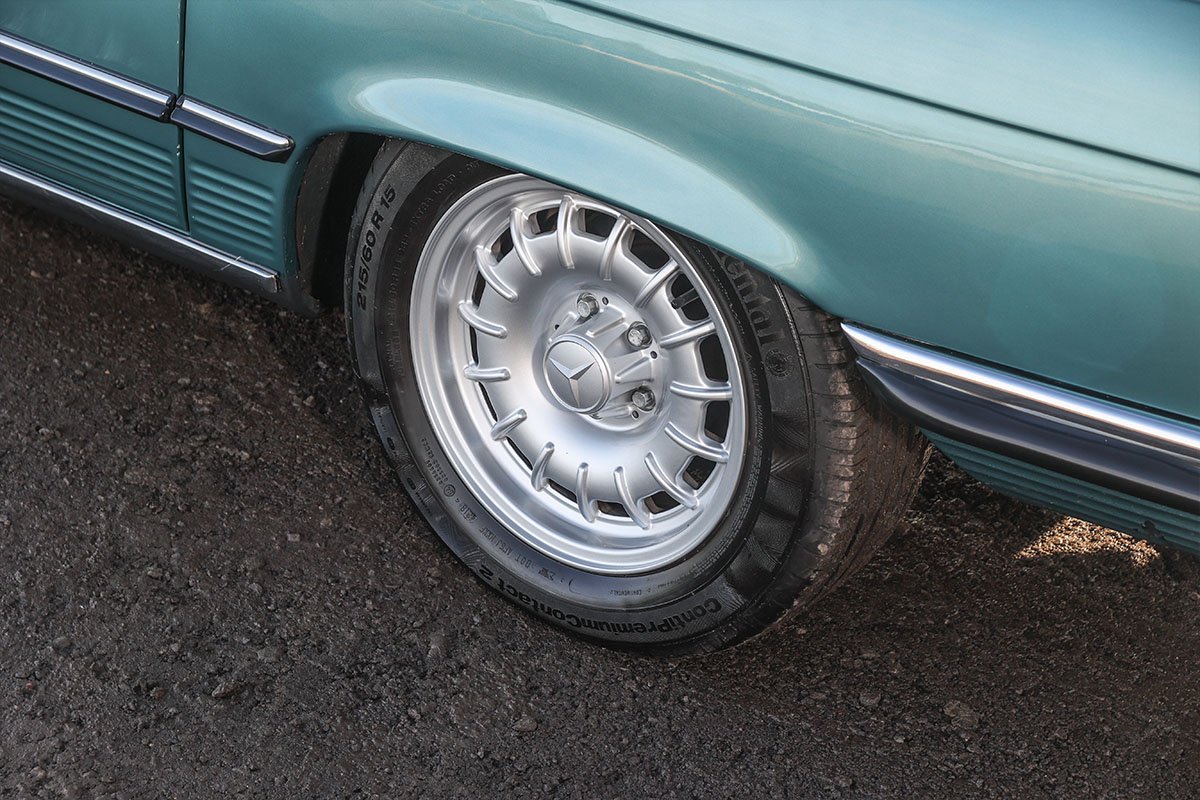 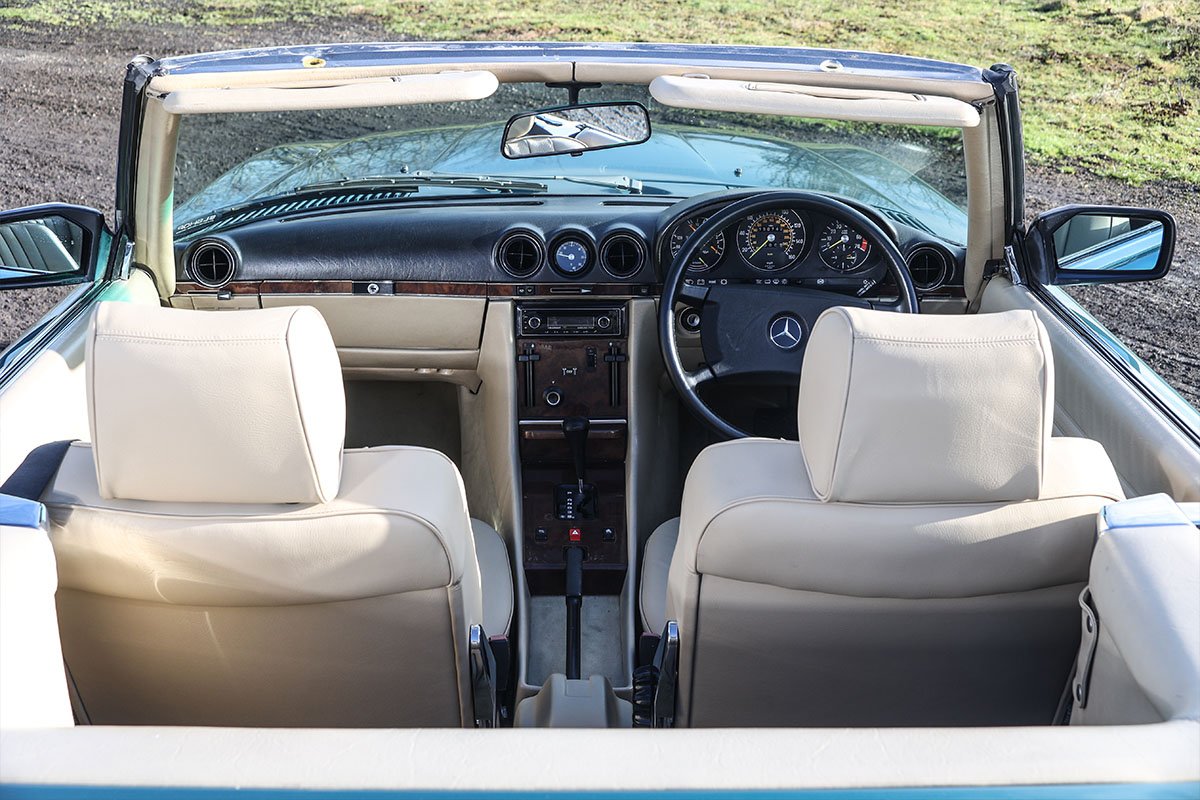 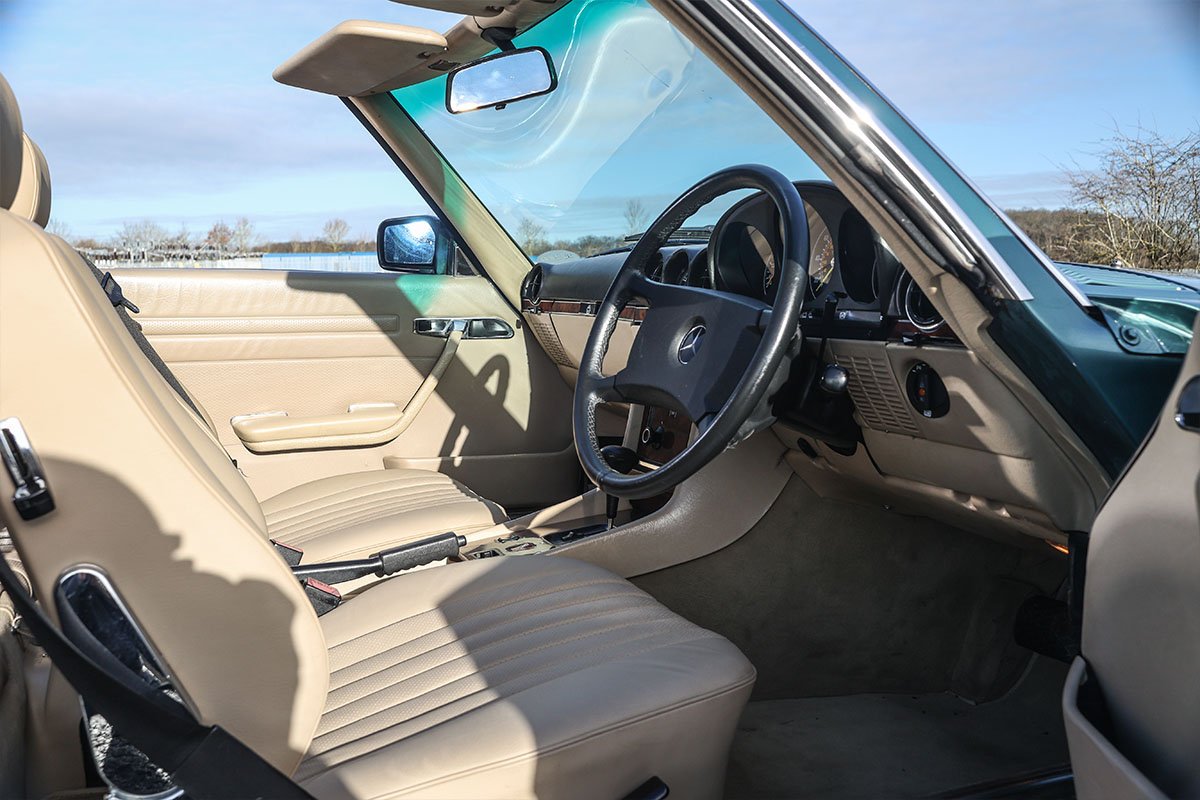 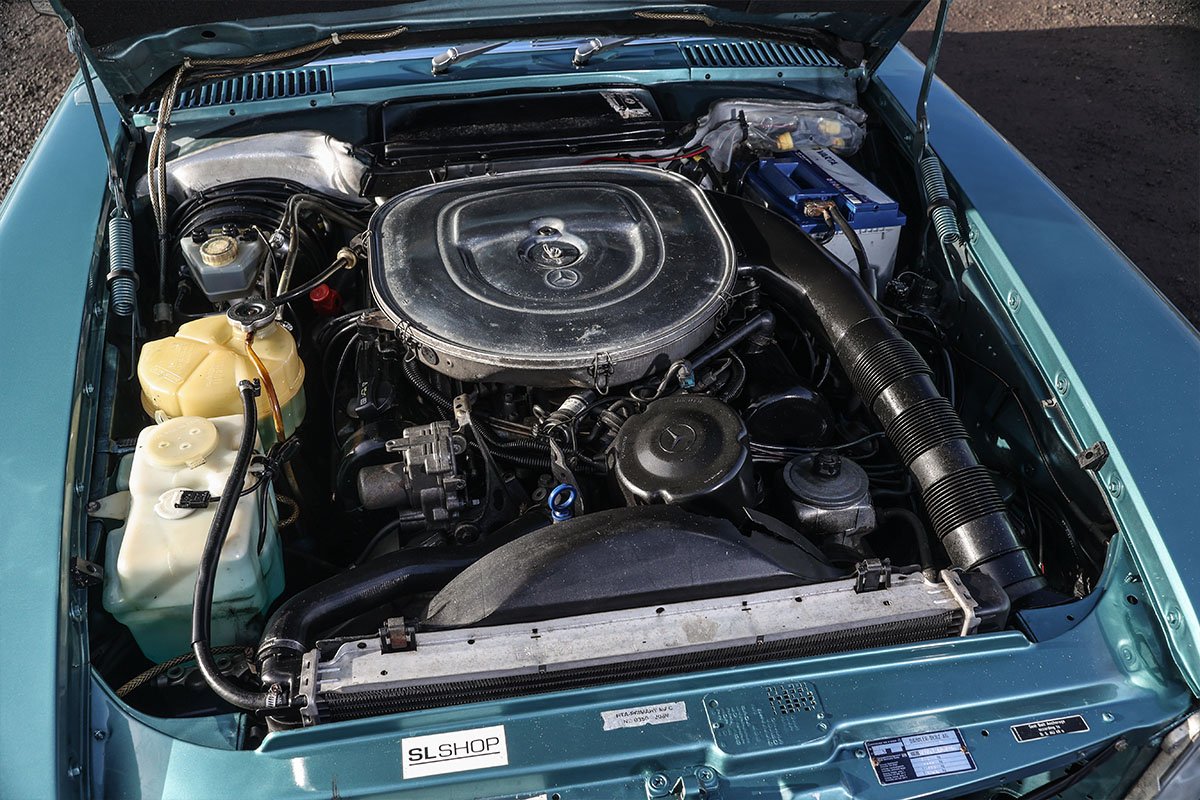 SLSHOP is delighted to offer for sale this well-presented and inimitable 1987 420SL finished in the extremely sought after and revered, Blue-Green Metallic (877). Otherwise known as Petrol Blue, this is a colour that is often mistaken as being simply Green, but it is in fact a unique combination of blue and green – a finish not commonly associated with the Mercedes-Benz R107 SL.

Originally delivered to Mr W.P.J Miller of Poole, Dorset who purchased the car from Majestic Garage in Bournemouth, the 420SL was sadly not to be enjoyed due to his passing at the end of 1988. The 420SL was acquired by M.Thomas Continentals in March 1989 from Mr Miller’s Niece before being sold to Mr Webber in April 1989. From here, the 420 SL went on to live a rich life of care and usage, at the hands of several meticulous owners.

The car features a multitude of paperwork detailing a strict servicing regime carried out by each owner over the course of the 1990s, with further documentation available all throughout the 2000s and up to 2018. The car at this point was taken in by SLSHOP where we carried out major servicing and improvements works including a Bulkhead repair, future proofing this R107 for many years to come. This included replacement control arms, replacement drive belts, a new cruise control module, a clean down and waxoyl of the section beneath the blower motor, amongst other things.

In 2018, SLSHOP handed over the keys to an esteemed BBC radio 1 presenter, who opted for a series of SLSHOP’s SportLine enhancements to be added in 2020, including lowering springs and uprated shock absorbers, as well as larger 15” Mexican Hat alloy wheels. Inside, they elected for a new speaker system throughout the car. During their care, the car was stored and serviced annually by SLSHOP, with it more recently being signed off for sale by the presenter.

This is a rare 420 SL finished in Blue-Green Metallic, made rarer by the unique road presence achieved by the uprated suspension and wheels. With newly trimmed seats, electric windows, an outside temperature gauge and a recently adjusted soft top with all mechanisms in order, this is a 420SL that can be driven daily. The powerful and refined V8 will also guarantee the new owner pleasant long drives.