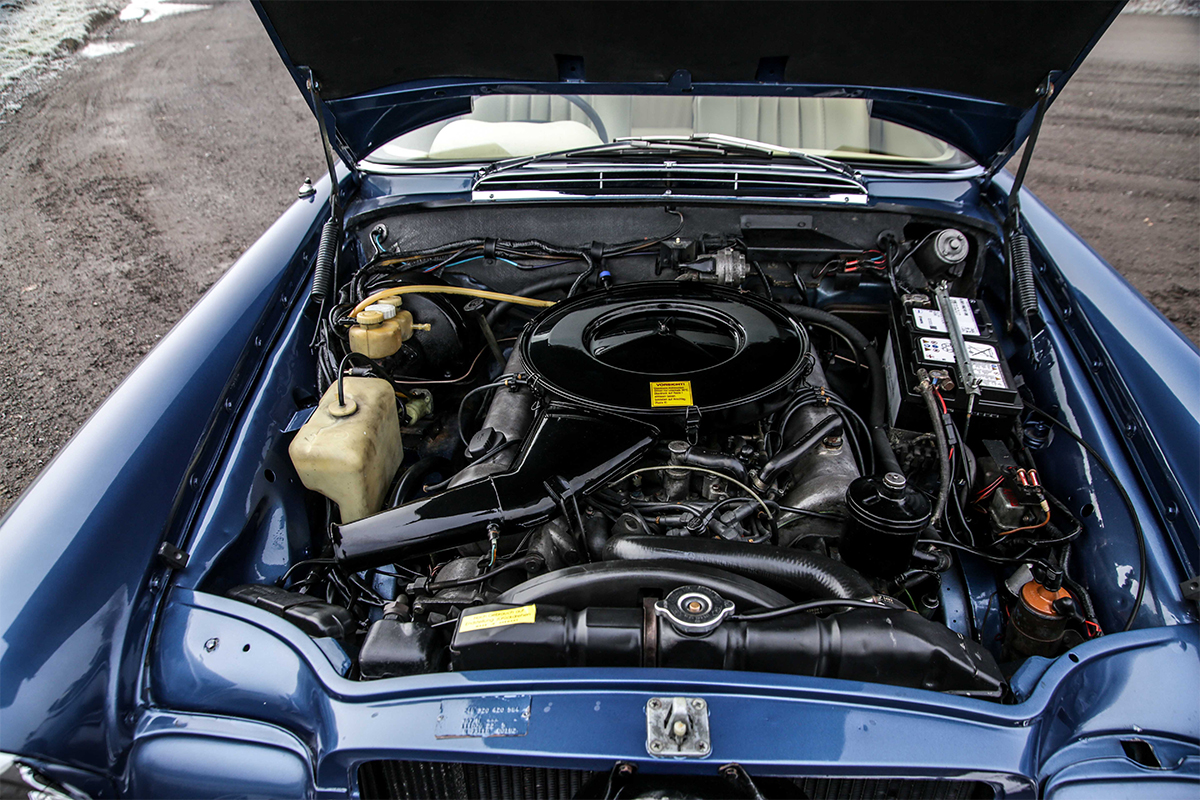 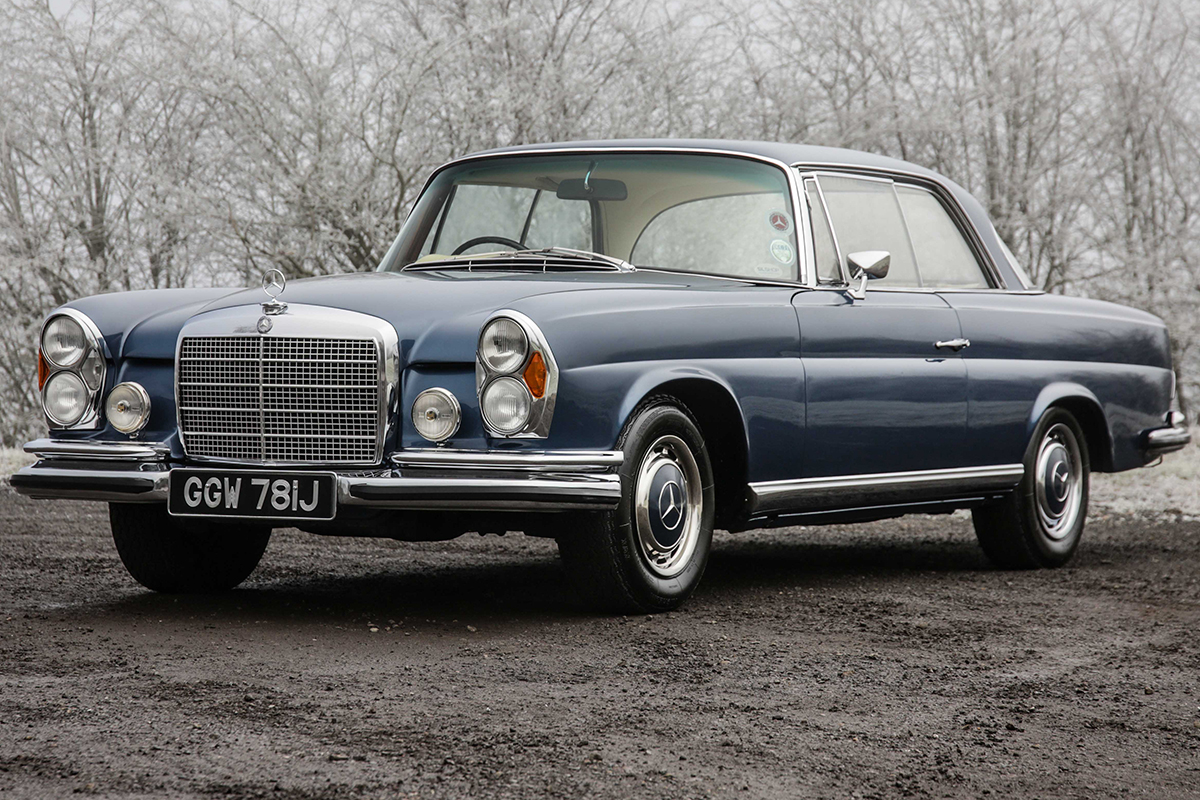 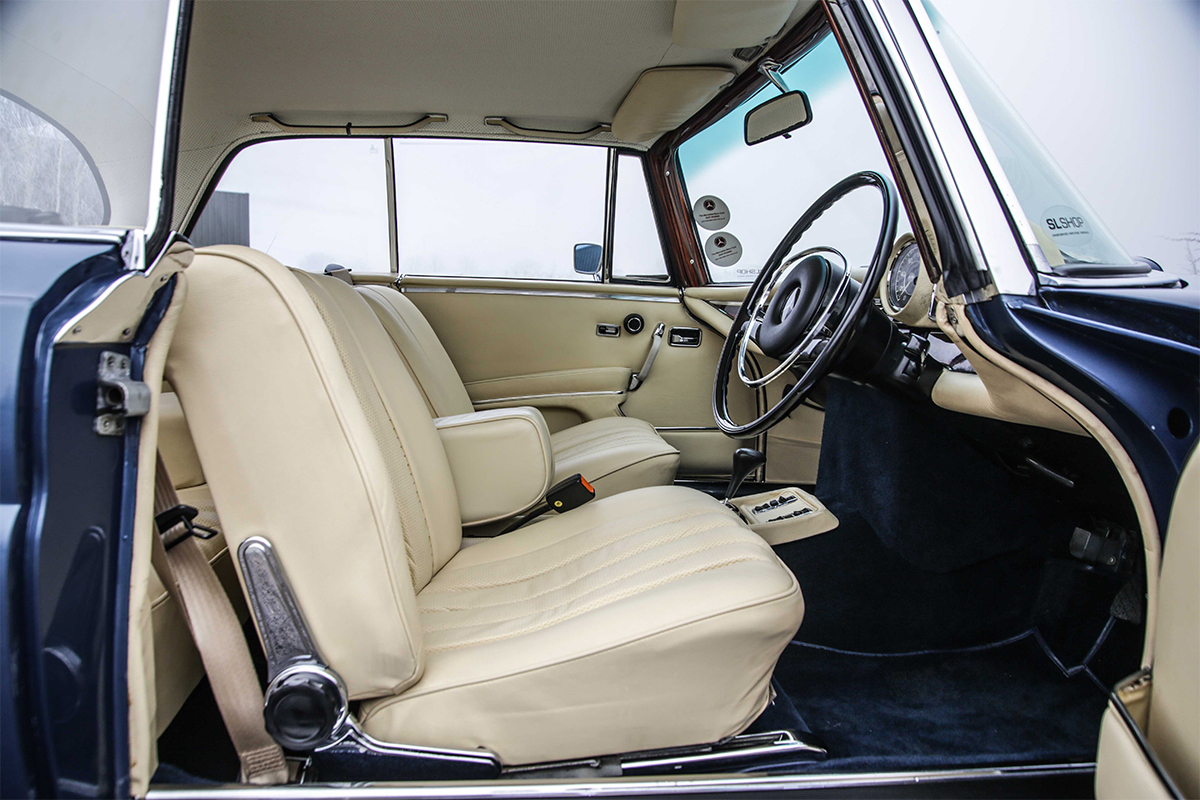 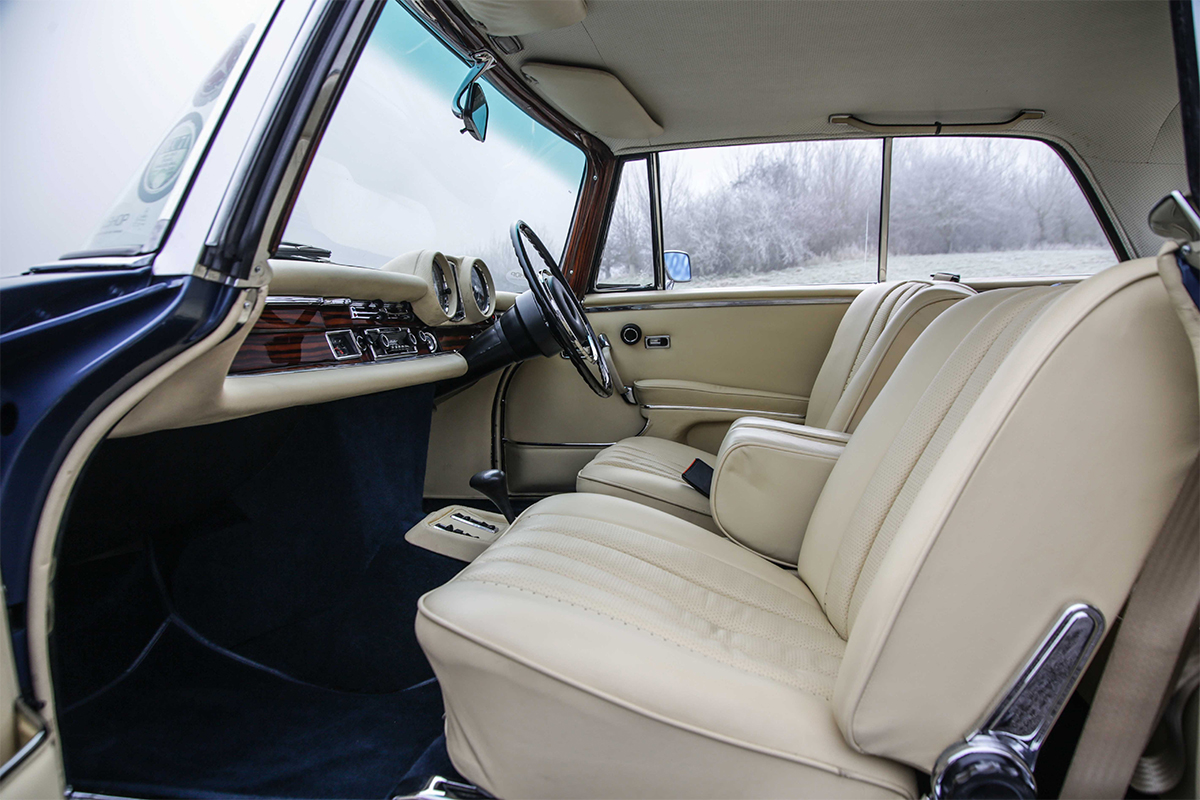 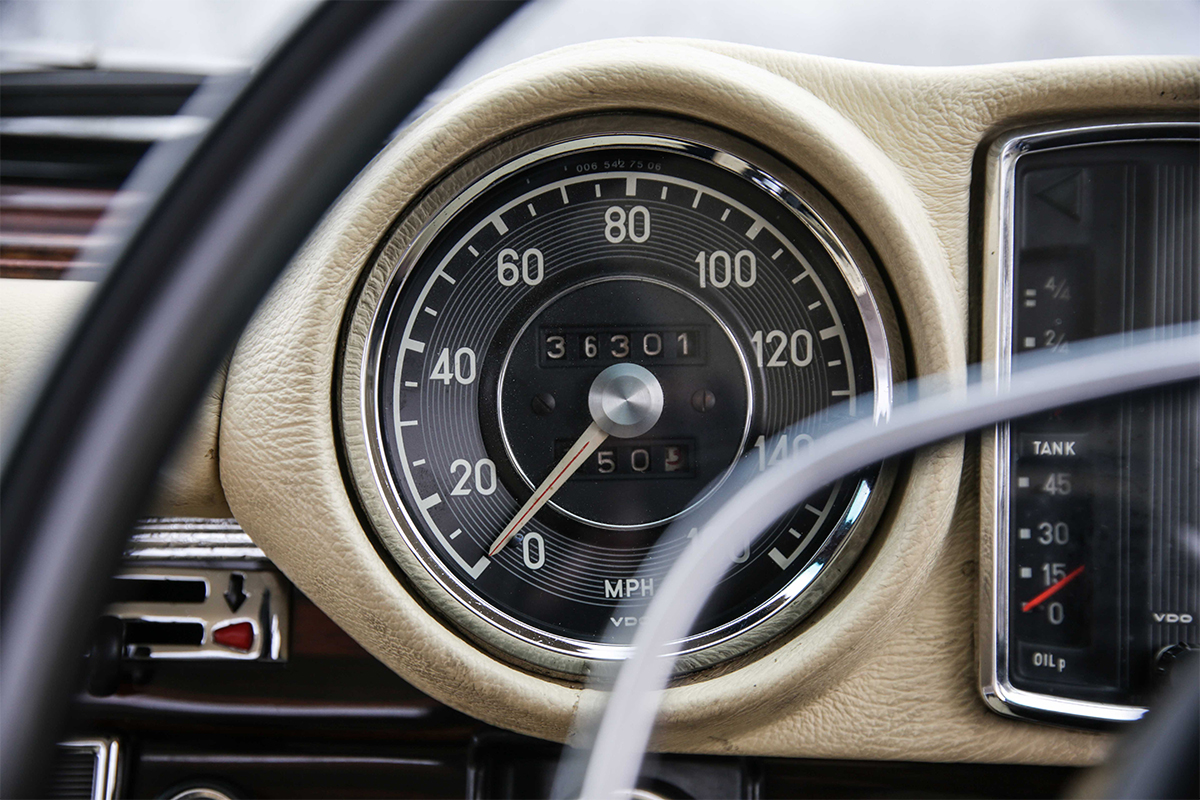 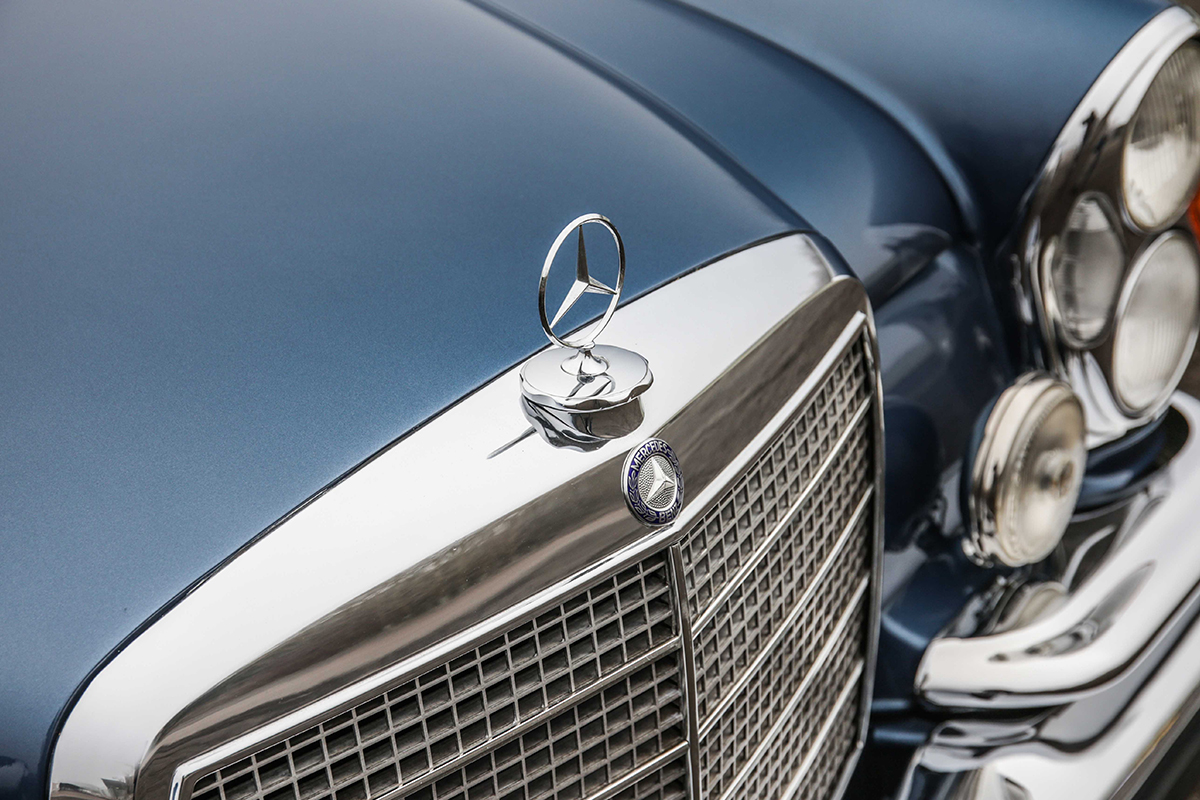 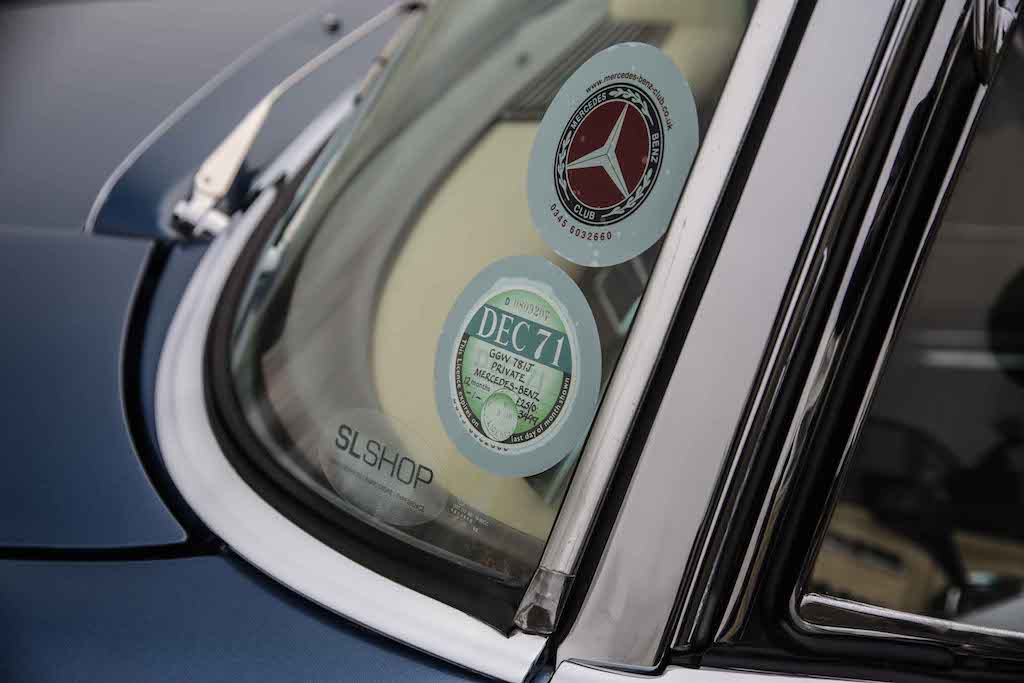 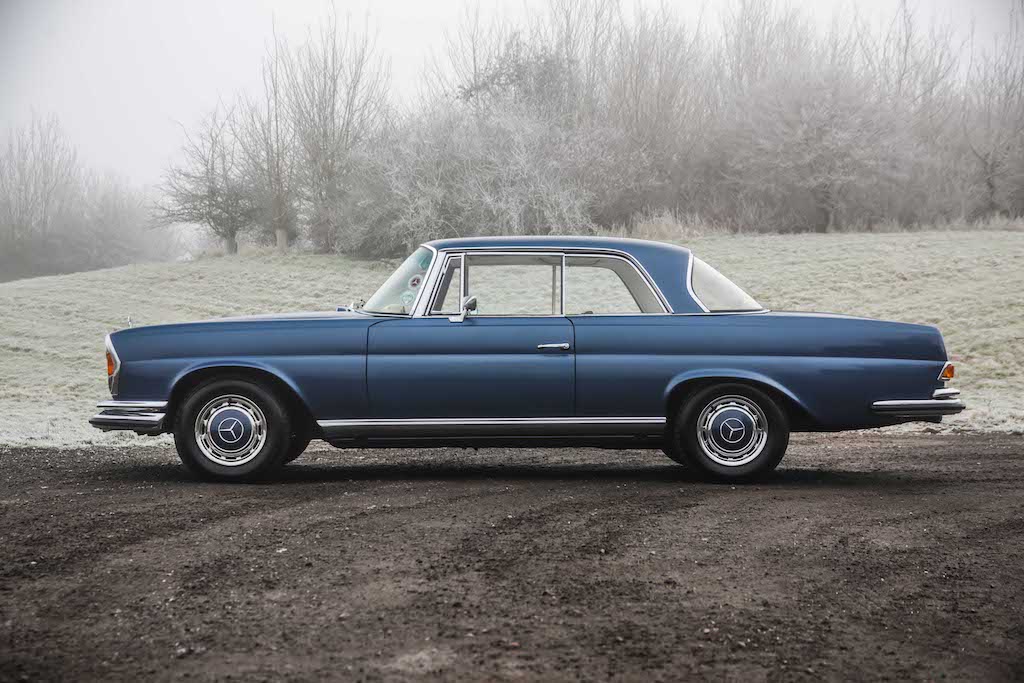 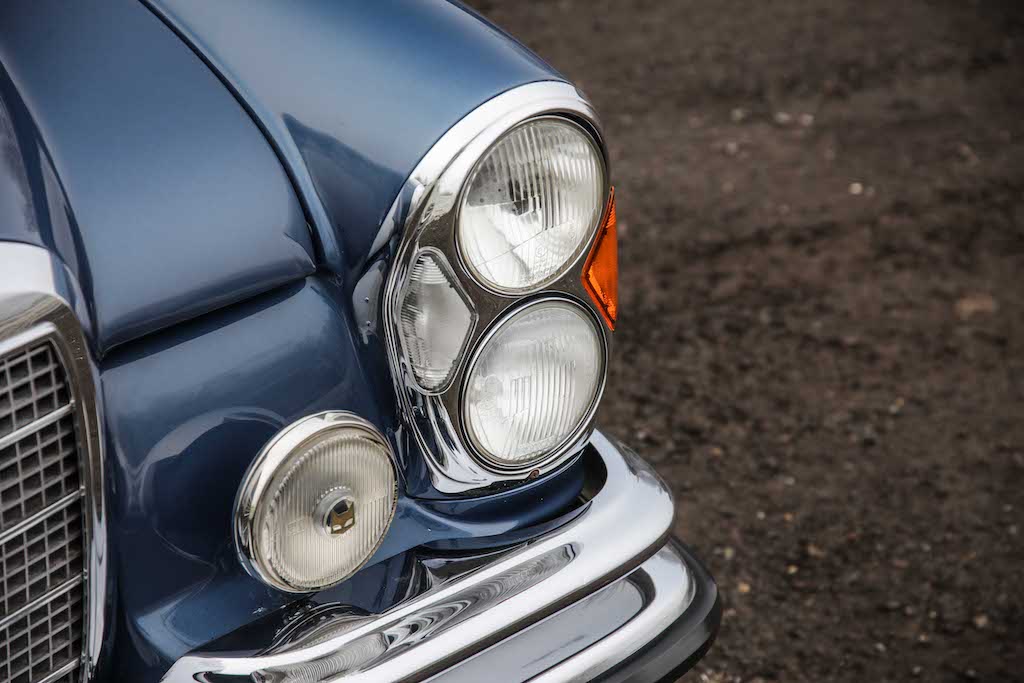 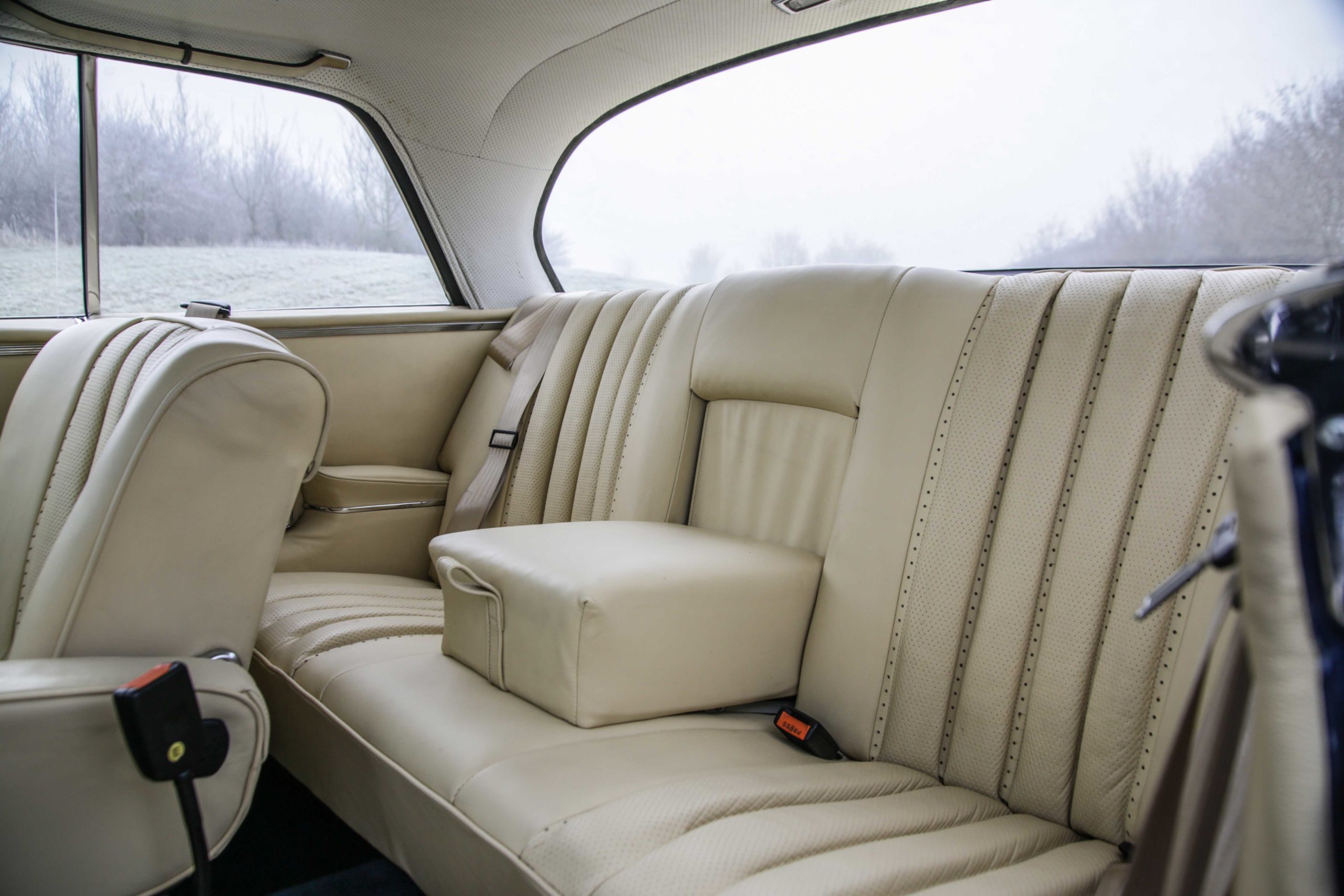 About the Mercedes-Benz W111 Coupe

The W111 Coupe is based on the Mercedes-Benz W111 platform that had launched two years earlier with the four-door Heckflosse – or ‘fintail’ saloon car. Penned by a team headed by chief design engineer Karl Wilfert, the distinctive Mercedes-Benz styling of the saloon featured American-esque rear tail fins, and a raft of safety features including designed-in crumple zones.

When it came to reinterpreting the saloon into an elegant coupe, it was Paul Bracq who was chosen for the task – the name that’s instantly recognisable as the man behind the Pagoda.

The Bracq design softened the edges of the W111 saloon, retaining the same wheelbase but losing the distinctive tail fins. The big two-door coupe offered ample space for four adults without compromising on style and luxury; setting the mould from which every S Class coupe since has been cast.

What we have in the W111 Coupe then is the great grandfather of the luxury Mercedes-Benz flagship, the first in a long line of beautifully designed and superbly appointed large two-door coupes that we now recognise as distinctly S Class. In 1965 the fintail design of the saloon was replaced when the W111 and W112 saloons made way for the the W108 and W109; however Mercedes-Benz decided to stay with the W111 Coupe instead of building a two-door on the new platform. The W111 Coupe would remain in production until 1971, eventually passing the ‘flagship four-seat coupe’ torch to the C107 SLC. As an ’S Class Coupe’ the W111 would not have a true successor until the W126 S Class two-door of 1981.

Paul Bracq had a magic touch when it comes to timeless design, and the popularity of the Pagoda is testament to the appeal of his delicate lines. With the larger W111 Coupe, Bracq captured something special with an elegance and a simplicity that exudes the luxury for which the car was known. These cars have always had a strong and loyal following, with both coupe and convertible versions never really out of the limelight.

In recent years we have seen a significant increase in interest across the W111 range, with the later 3.5 V8 models being the most sought after. With 200hp and that distinctive V8 sound, it is the overall aesthetic both inside and out that make these cars so popular. Driving a 280SE 3.5 gives a sense of occasion, these cars really are something special. From the way the walnut is carefully sculpted around the instruments, to the precise flex in the comfortable seats and the way these cars waft down the road, it isn’t hard to see why these cars command the premium that they do.

Finding a good quality W111 coupe or convertible has never been easy. The cost of maintaining these cars properly means one simply has to buy the right car – to fully restore a W111 coupe with all it’s chrome, complicated mechanisms and aged mechanicals would produce a not insignificant bill…Rectification of these cars is neither easy or cheap – some parts are virtually impossible to source, and a specific type of craftsmanship and understanding is needed to produce the exceptional results that these cars deserve. Finding and buying a good example is absolutely crucial, which leads us to our next section…

About this Mercedes-Benz W111 Coupe

So often with luxury cars of the 1960s and early 1970s we find long periods of either neglect or misuse. As a car becomes more expensive to drive and maintain it might languish in a shed, barn, storage unit or god forbid – outside; but the history file that accompanies this car paints a picture of a loved and adored vehicle that has been used consistently ever since the day it was built.

First registered in 1971, this Blue Metallic 280SE 3.5 must have been quite the sight on British roads in it’s day.

The earliest documents within the file date from 1977, when the car was just six years old. In January of that year the car had a service including brake pads at Bradshaw, Webb & Co. Specialists in Luxury Cars, presumably ready for a European trip in the months to come. We find a receipt from Euro-Garage Mercedes-Benz Concessionaire in Paris dated 7th September 1977, where the wiper motors were replaced and the heating valves unclogged and repositioned… the mileage is stated as 54,654. In February of 1978 we are back in England, with the car showing a 60,000 mile service at Mercedes-Benz on the Great West Road in Middlesex, with a total price of £247.64.

Further servicing and maintenance work takes place with Mercedes-Benz in Middlesex through 1978 until 1981, with Steve Redfearn taking over the maintenance in 1986 – the company that would then care for this car consistently for two decades.

Present with this car then is a truly exhaustive service history and maintenance file, the details of which we will only highlight here… there is another interesting tale that can be gleaned from the paper trail. On an Offer & Sons Coachbuilding invoice dated 22nd Feb 1980 there is evidence showing the fitment of an aftermarket electric sunroof, along with some other works. With a total bill of £3,055, the car left the coach builders with a metal sliding roof. 21 years later the then-owner of the car wrote to Mercedes-Benz to find out of this was available as a factory option, and received the reply that the sliding roof was not released with a W111 Coupe, which leads to the next interesting junction in the life of this fantastic car.

In 2016 it was subjected to a comprehensive restoration, at which point it was put back to it’s correct factory configuration with the removal of the retractable sunroof. The work was done by Steve Redfearn, and the photograph record that accompanies the car shows the high standard to which this car was restored. In excess of £40,000 was lavished on this car not less than 5 years ago to bring it to the condition in which it can be enjoyed today.

In more recent years this car has attended SLSHOP for additional fettling and improvement since the restoration. Just like when the car was in France back in 1977 SLSHOP have freed up the wiper mechanism and undertaken works to ensure all the heater ventilation and dials are working as they should. Some of the power steering pipes have been replaced, as well as adjustments to the windows to ensure proper operation.

The net result is a car that not only looks and drives exactly as it should, but that shows a lifetime of care and attention in exactly the right way by exactly the right people. This is a car that can be used and enjoyed, loved, showed and adored safe in the knowledge that it has a provenance and heritage that would be difficult to rival with even the very best W111 Coupes.

A superb example of the breed, in an excellent colour and all in impeccable order. From the burl wood to the calf leather interior to the finish of the paintwork, this is a beautiful car to behold.