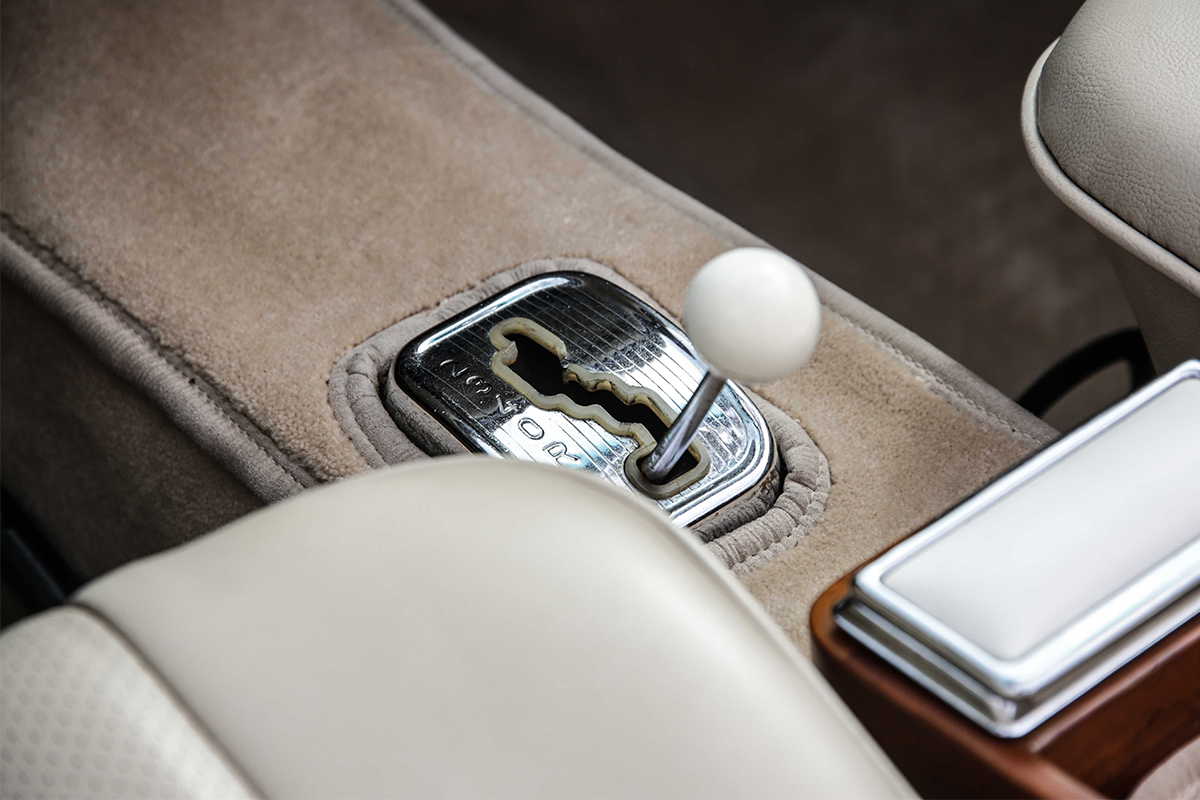 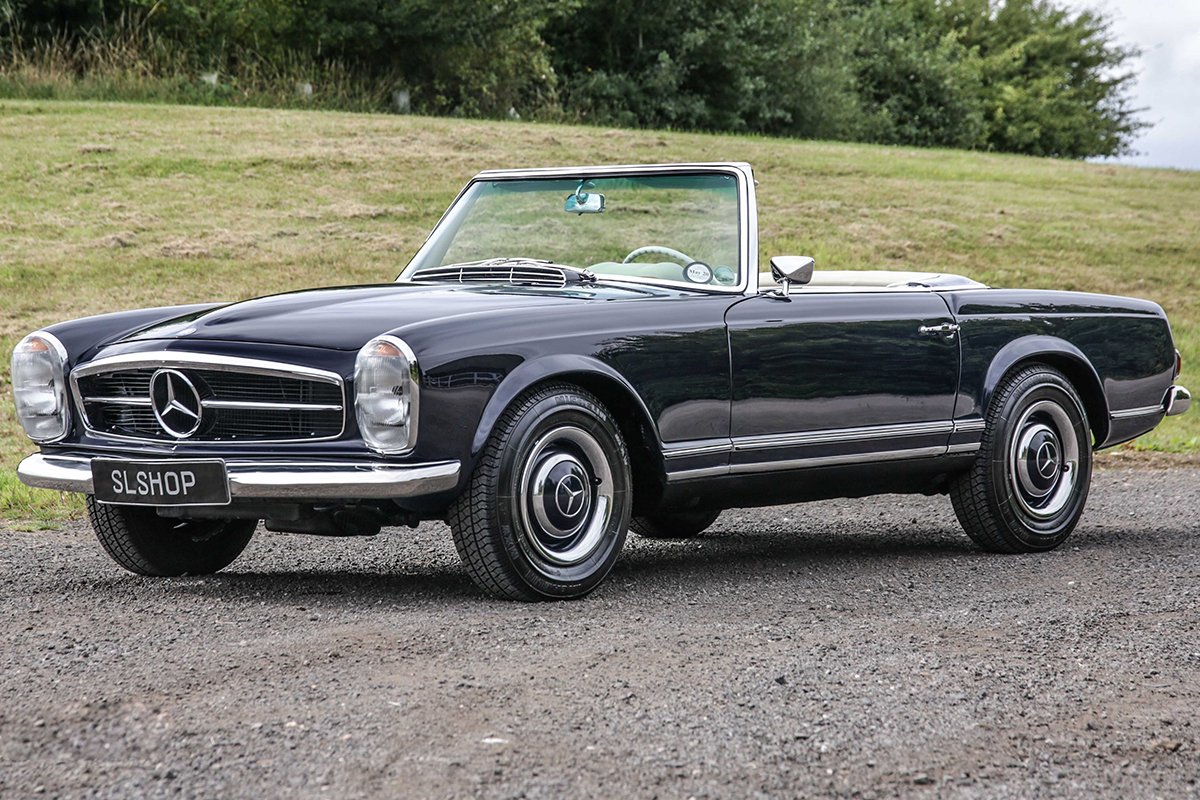 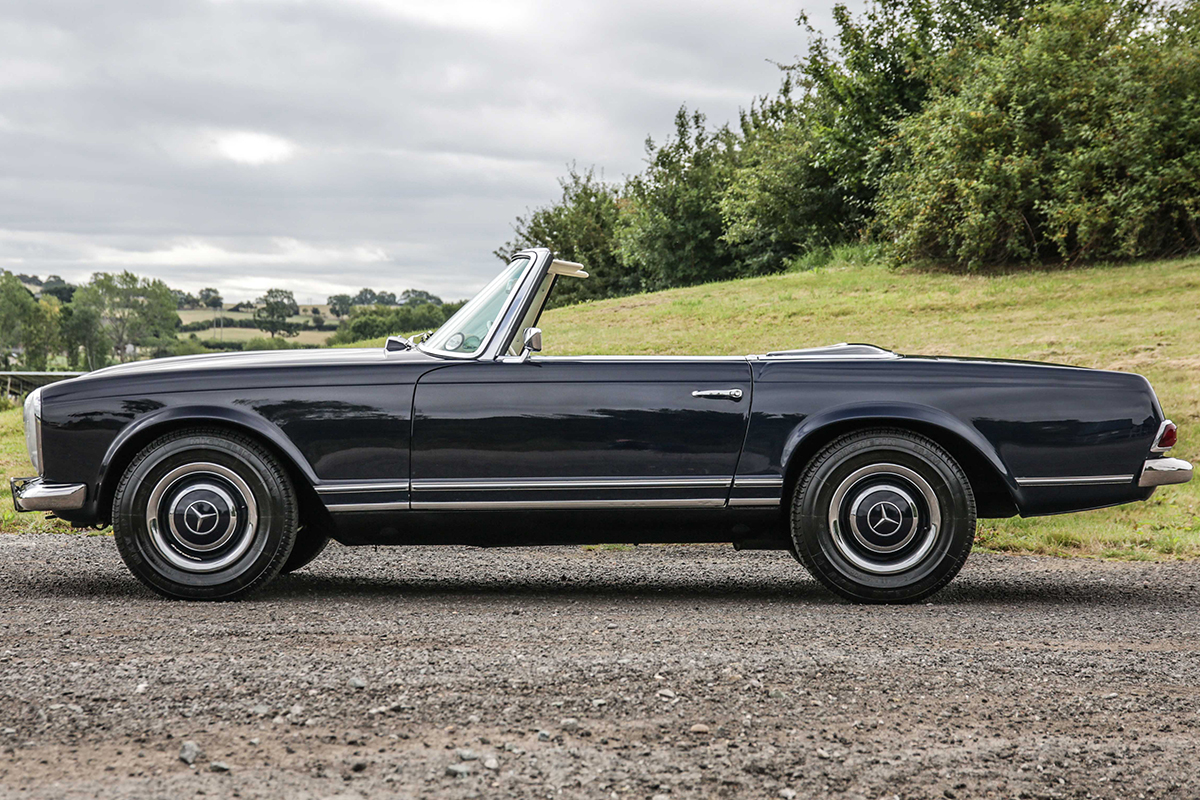 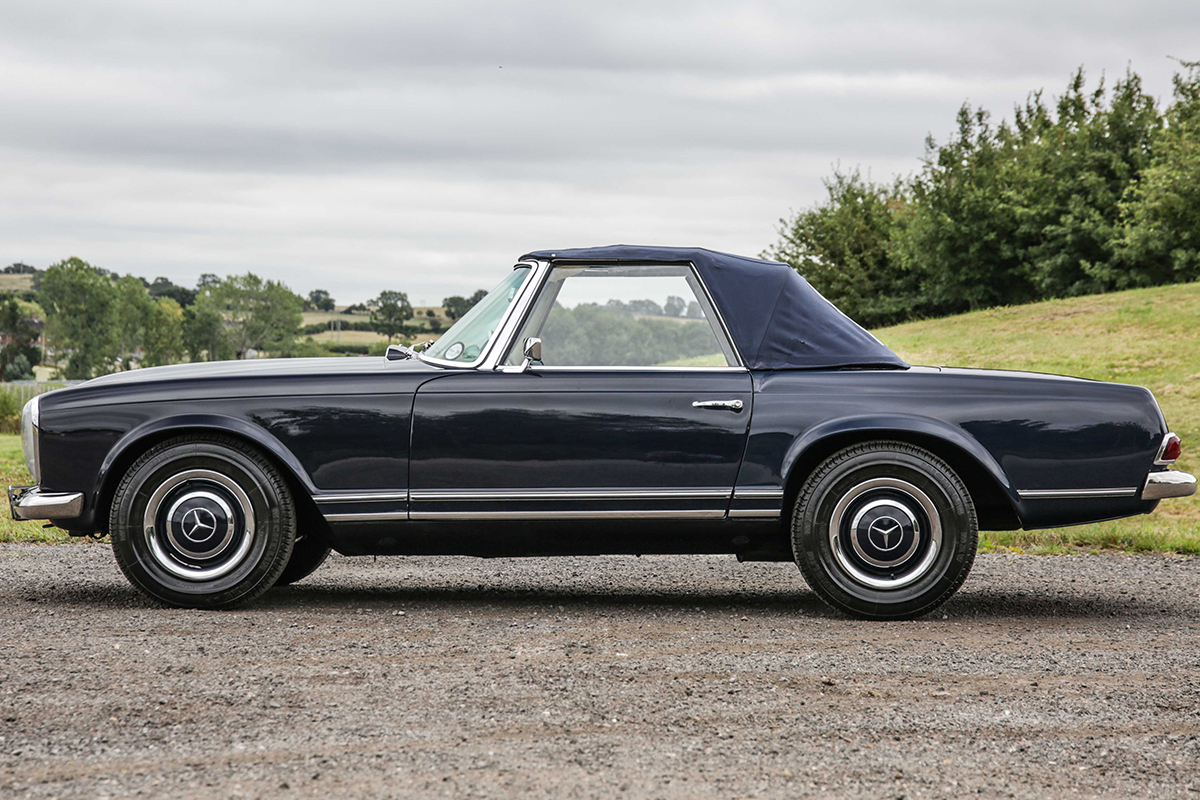 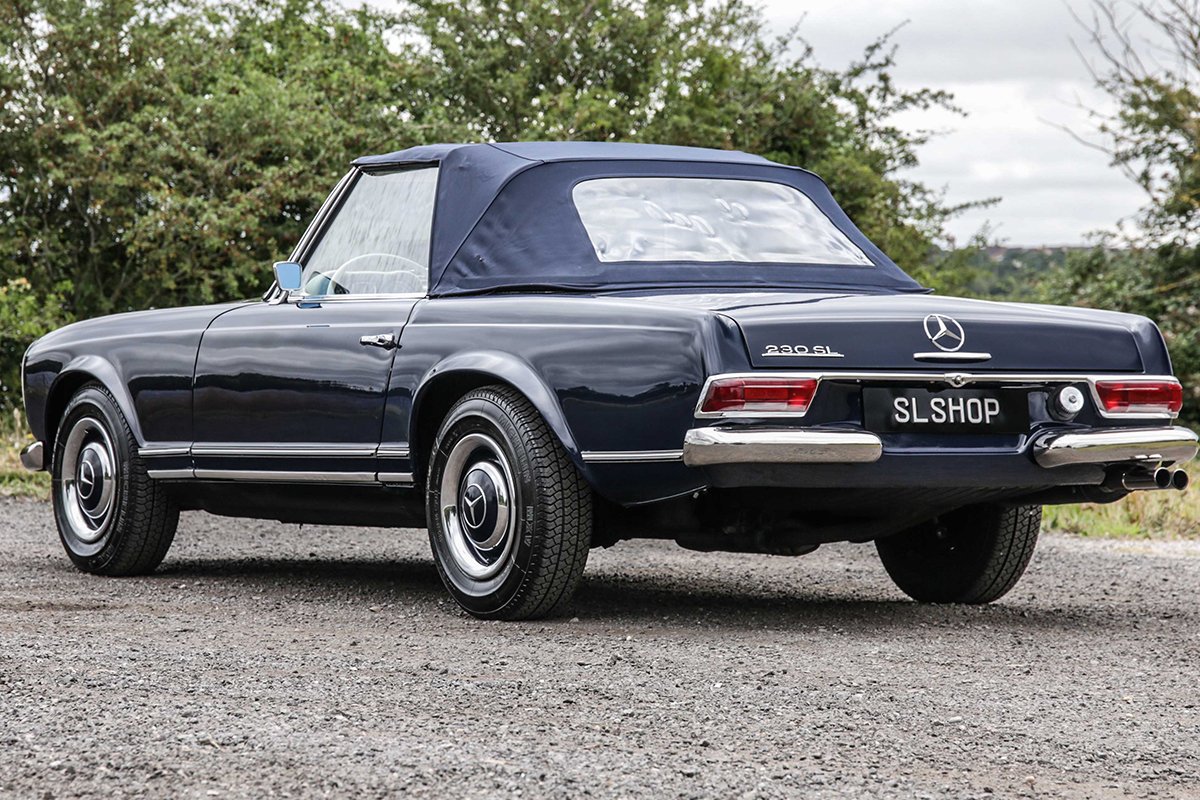 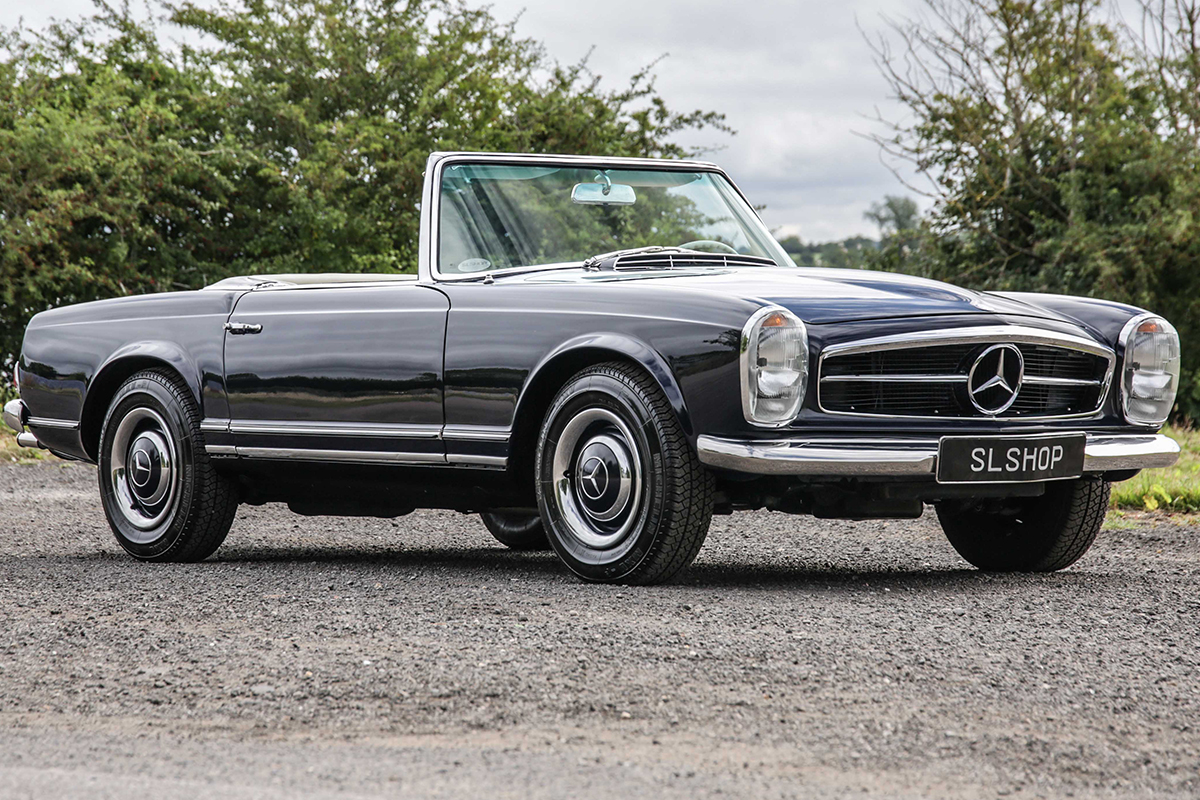 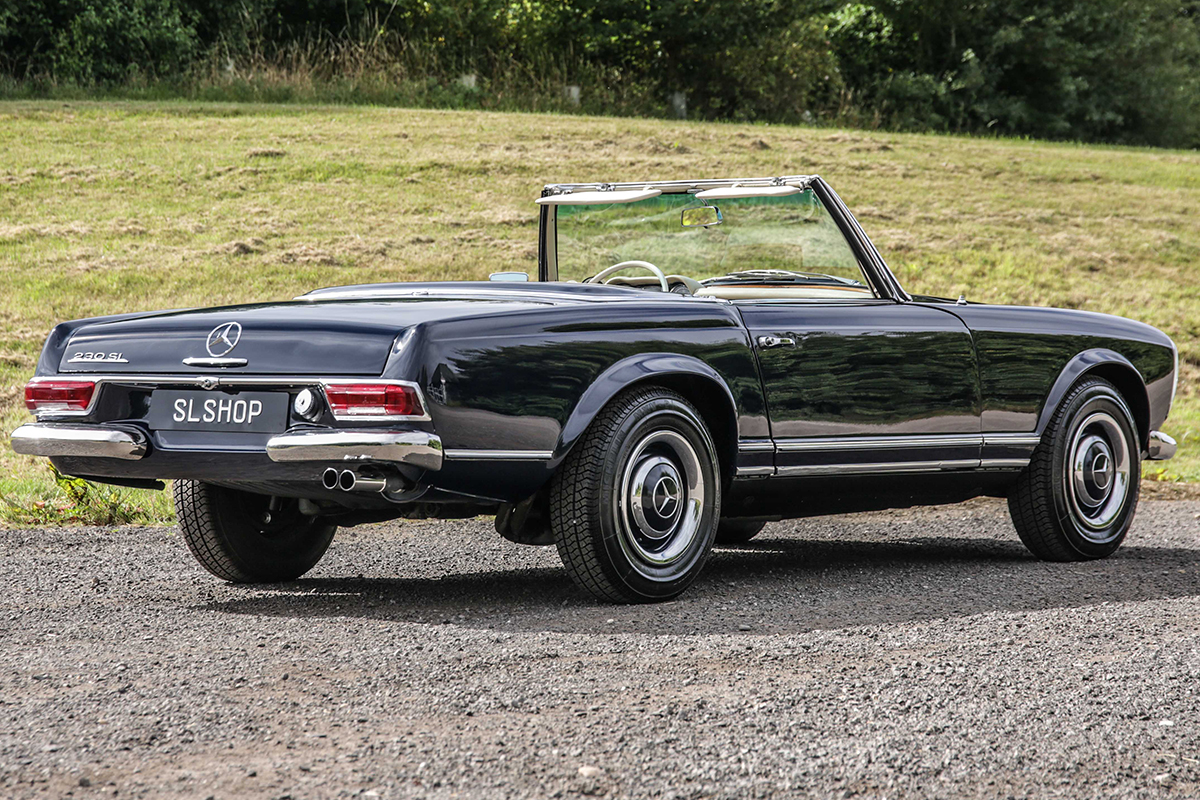 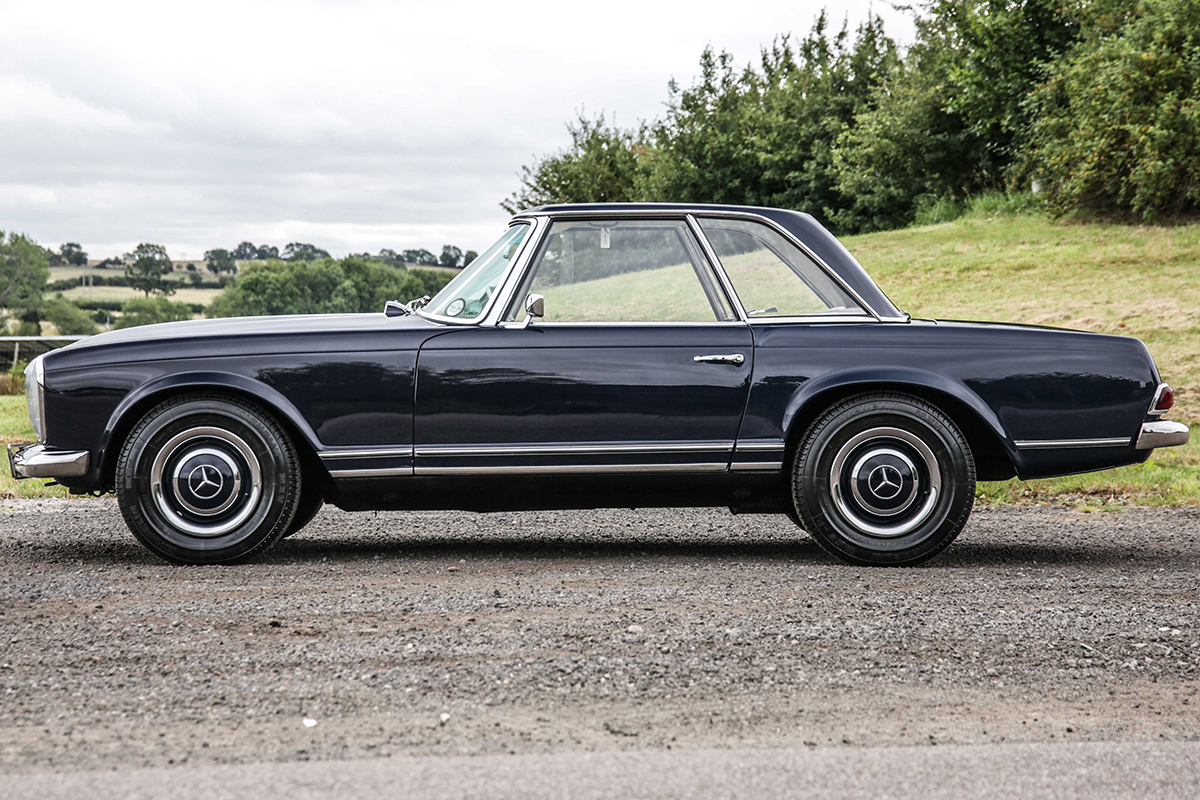 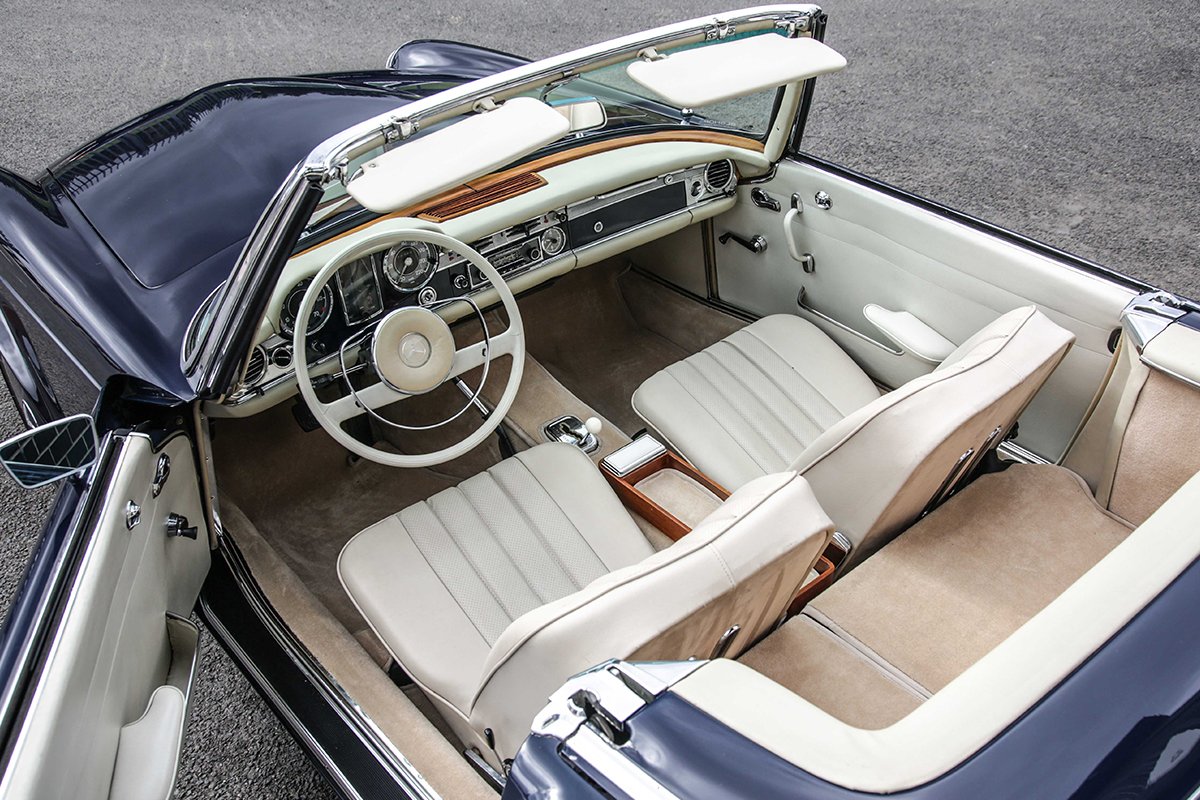 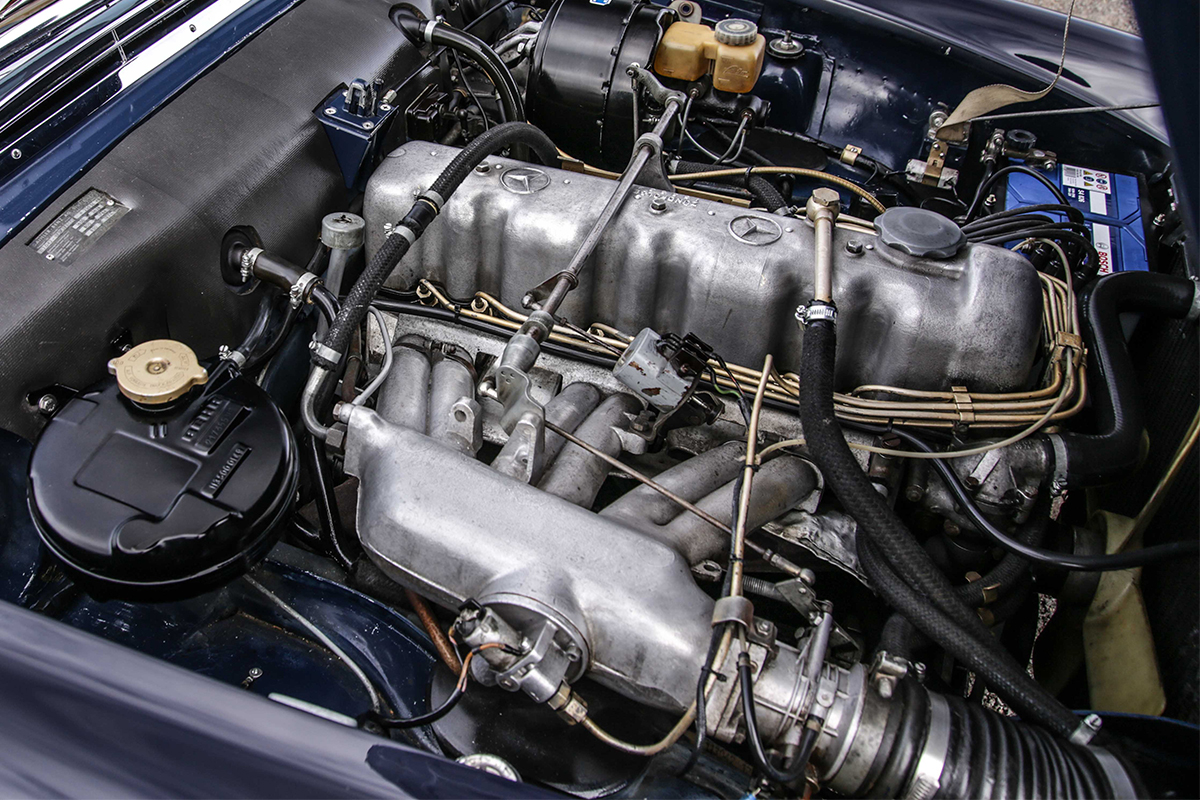 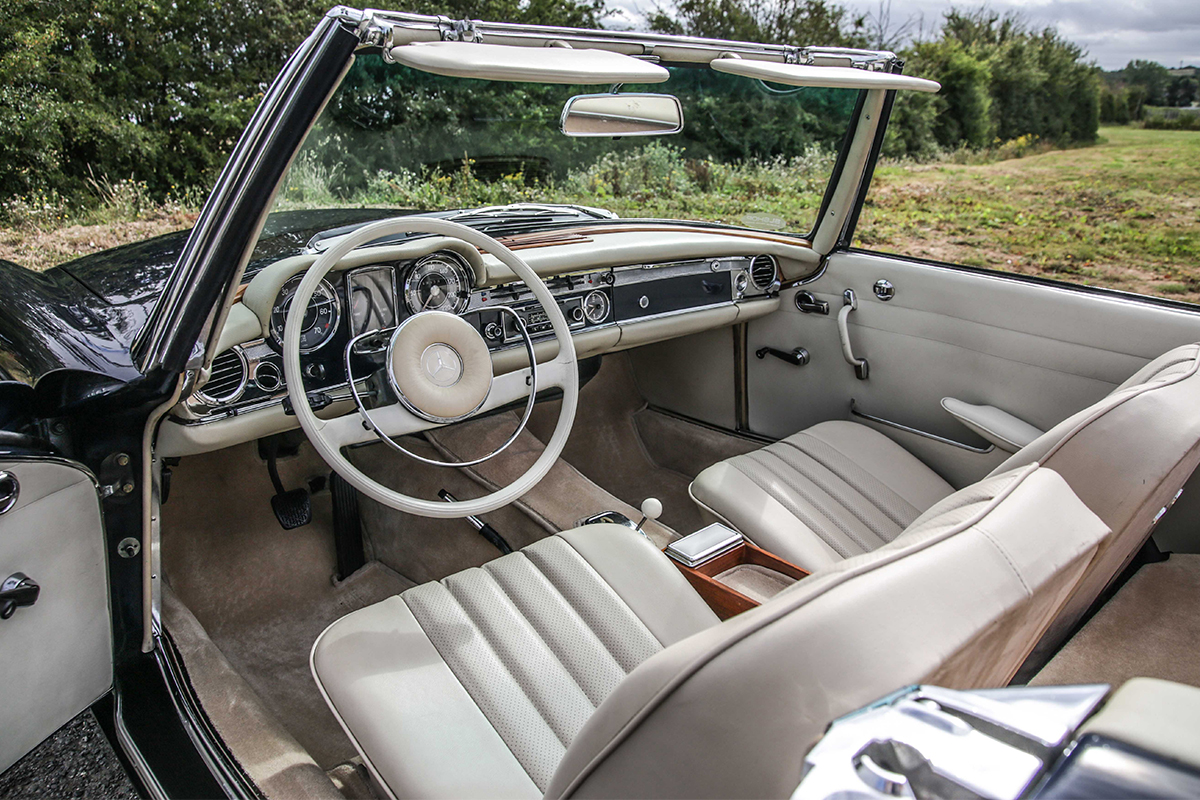 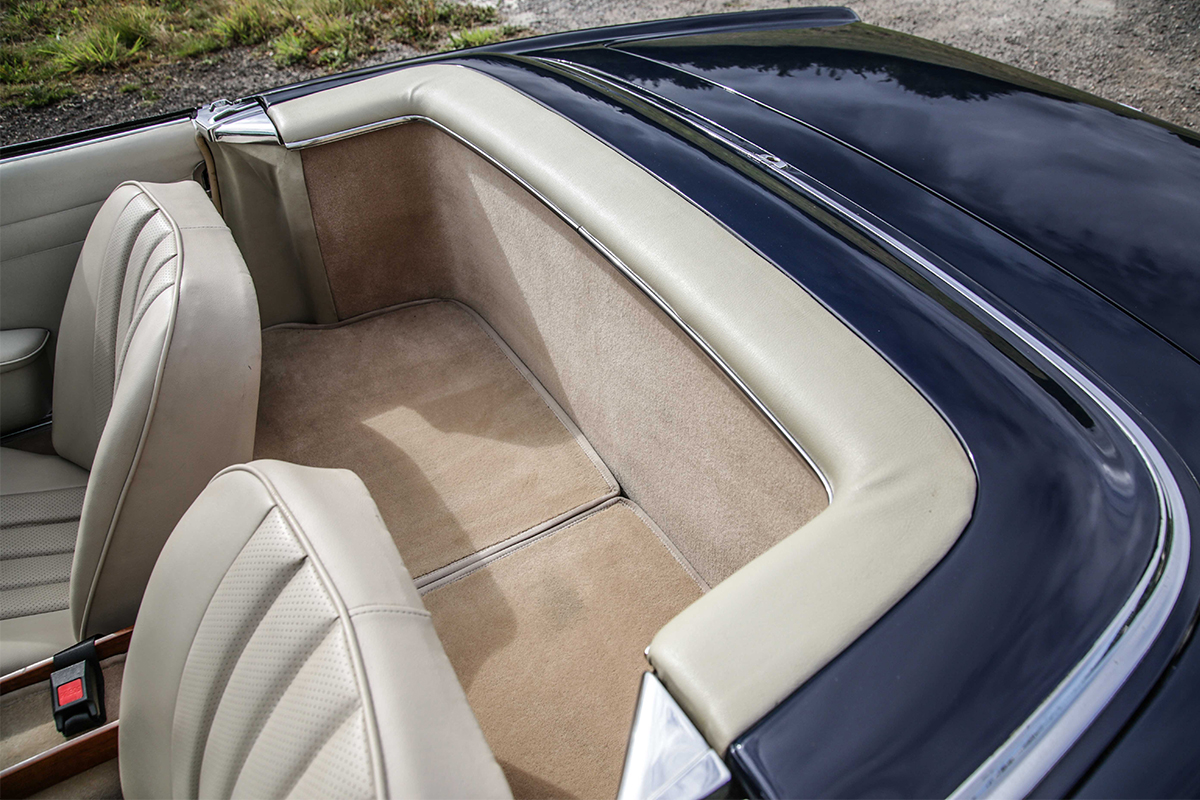 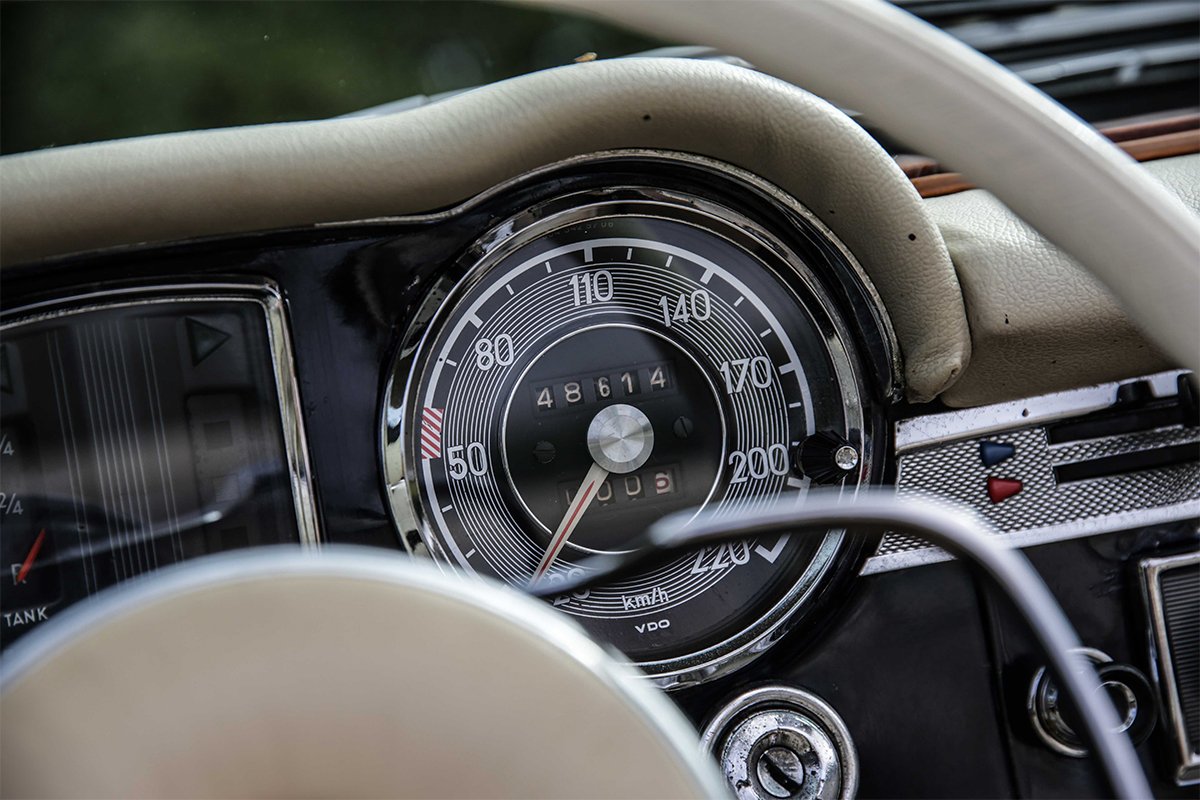 This beautiful Dark Blue 230SL Pagoda was delivered new to Malta, and was purchased by the current owner in 2015. Documents on file show that since 2015 there has been an ongoing plan of improvement and maintenance, with many receipts for parts including chrome and trim.

Before arriving at SLSHOP this car went through our comprehensive pre-sale checks, with a number of areas highlighted for attention. The car was given a major service (including the gearbox) along with a plethora of small but crucial jobs, including but not limited to replacement of all rubber hoses to the fuel pipe, clean down the rear axle, test and inspect accordingly, new propshaft coupling, new centre bearing, new water pump, replacement power steering hoses, overhaul brake system including pressure test, waxoyl underneath and suspension components as necessary. Some small elements of the chassis were rectified, including the cabin floor and accelerator pedal and bracket. Finally the windscreen washer pump was replaced, a simple but crucial component… non functioning windscreen wipers and washers on a Pagoda can often mean removal of the dashboard.

What we have here is a Pagoda that is ready to be used and enjoyed, a striking looking car that comes from a recent caring owner. The interior and exterior are presented in superb condition.

For many, the ultimate Pagoda is a European Right Hand Drive Automatic. Although the manual-gearbox cars are in demand, for many of us the pure simplicity and ease of use that comes with a 4-speed automatic transmission makes touring in a Pagoda an absolute delight.

This beautiful Pagoda has been owned by the current keeper since 2015, during which time the car has resided in sunny Malta. Used sparingly, the owner has embarked on a series of improvements, with receipts and documents on file detailing a not insignificant expenditure spanning this time period.

There is an organised folder accompanying the car, including the original manual. This car comes from cherished ownership, and is a delightful car in a very desirable colour combination.

One to be used and enjoyed, admired by those outside the car just as much as the occupants.