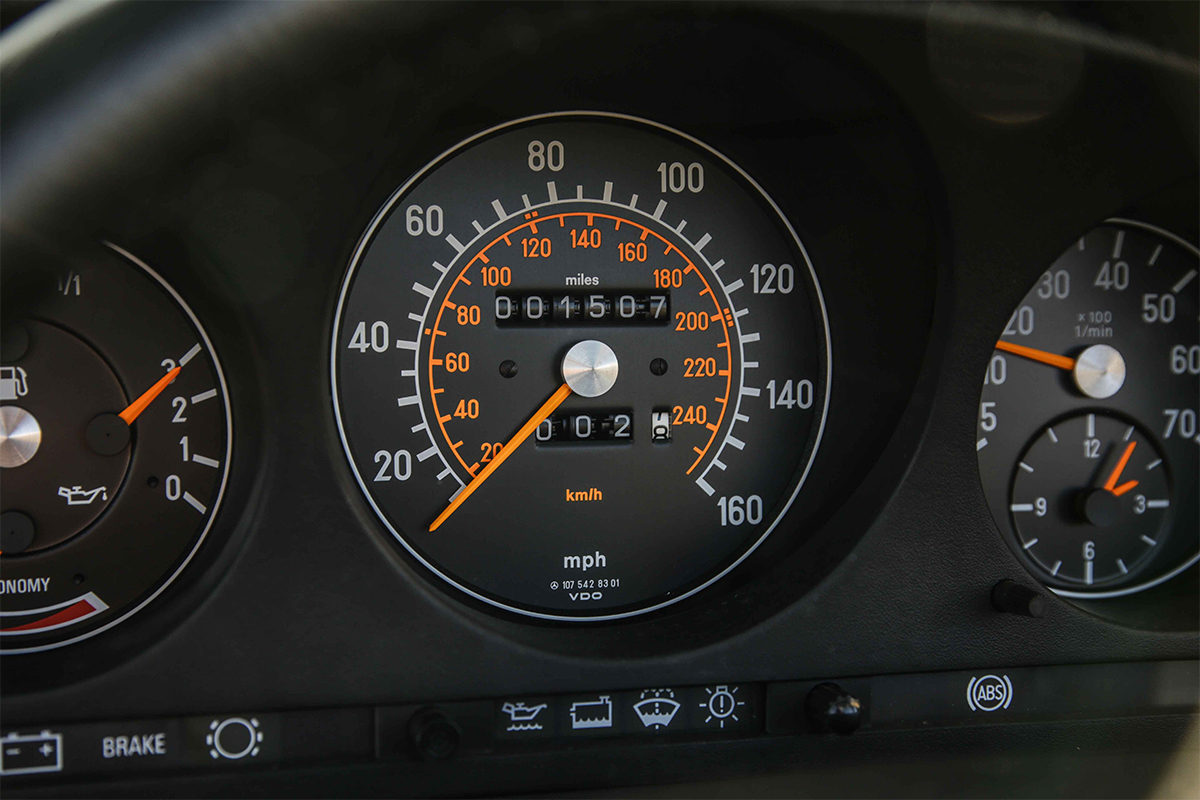 In 1989 the Mercedes-Benz SL market was about to change forever with the impending launch of the R129. The R129 was so different to the R107 SL it would replace, it’s no wonder some potential R107 buyers had a change of heart and left the showroom in the newer model instead of the 1971-89 example they had ordered.

The car shown here is one of the very last, one of just 126 420SL models built in 1989. We must assume that it was one of those ‘cancelled order cars’, as it wasn’t registered

Until 1990. It was intended for delivery to a Mr W in July of 1989, who presumably cancelled his order in favour of the new R129. Instead this car as bought new by a Mr M, becoming the car’s first and only keeper on 5th February 1990 – facts confirmed in the original lock book which is present with the car. The late registration of this car makes it one of the very last R107’s registered on a G plate.

Supplied new by Lancaster Europa Mercedes-Benz of Sheffield, the car was specified in Signal Red (568) with Cream leather (275), a combination that would go on to be the colours most synonymous with the elegant lines of an R107 SL. On top of the factory standard equipment, this car also features Cruise Control and Rear Seats, adding £655.73 to the final bill giving a total cost of £38,904.20. How much that bill was discounted by the dealer in order to secure a sale in 1990 we will sadly never know…

In the following 11 years the car saw barely any use, being serviced by a main dealer at 1,414 miles on the 8th August 2001. Further maintenance has been carried out by Cummings of Bodmin, a company that knows how to care for exceptionally low mileage cars. All the receipts on file state the odometer reading, with the last invoice dated 28th June 2018 with 1,489 miles listed. This receipt details the fitting of a new fuel pump, filters and sundry items.

To see this car is to experience the finest example of what a brand new SL should look like. The dials don’t have any of the fade that comes with time, the organge typography is crisp, the white decals are all present, never rubbed off, never degraded. The indicator stalk graphics have never been eroded by regular use, this car is as fresh as they come.

Driving this car is an R107 revelation. The steering and handling feels sublime, it feels brand new, solidly put together and tight as a drum. We believe this is about as close as one could get to the feeling of buying an R107 new in the late 1980s, and it really is something to behold.

Now offered for sale on behalf of a private client, this 420SL is one of the true greats, a rare car with an interesting story and possibly the only one in existence.