In this episode Graham sets a personal best at the Nurburgring.

Episode 31 – Germany to Charleroi via Spa, Nurburgring and Luxembourg 260 miles

Seeing the map, today’s route looks like I was lost or demented. Sometimes it is both but this time it was dictated by the Nurburgring only being open at 5:30pm for an hour and me wanting to fill up in Luxembourg with cheap fuel before heading for home.

The day started unexpectedly well with a lovely drive through the Eifel National Park on the German border with Belgium. Much nicer than any of the routes in southern or eastern Germany, yet it isn’t mentioned on any of the German scenic routes I found online.

Quickly crossed the border into Belgium and headed off to the Spa Francorchamps F1 circuit. Looks and feels like the Belgian road building department decided to go on a jolly to UK learn roadbuilding rather than nipping across the border to Germany to find out how to build decent roads.

At least the beautiful Ardenne forest took my mind off the roads and the heat which was building up to the mid 30’s and south of Spain style heat. Why is the Ardenne forest beautiful and the Swedish/ Finnish forests not? A number of reasons, the trees are much bigger and more majestic, many hills, not flat endless expanses and the forests are broken up with fields and lovely views.

Other than a few golfing holidays in southern Spain, my only previous, although very short, holiday in Europe was in the early 90s and included a trip to the Spa Francorchamps circuit. In those days part of the new circuit was public roads and my overriding memory was how long and steep, very long and very steep, the Kemmel straight was. Today you can only cruise round what is left of the old, pre 1978, circuit and it makes you appreciate why Jackie Stewart so rightly fought and won, against all the odds, to make motor racing safer.

After a quick siesta, it was off to the Nurburgring in Germany. I have enjoyed many a lovely siesta on this trip round Europe, not sure what the Scandinavians thought of me snoozing in the middle of the day, but when the thermometer gets up into the 30’s they are essential.

The Nurburgring is one of those places on a bucket list that you can easily tick off, but it’s not a place I would drive more than once. Most of the corners are blind, the difference in speed of a McLaren with lots of extras and ordinary cars is massive and the runoff areas are non-existent. If you want to be scared google crashes at Nurburgring and again you can see why it was rightly removed from F1 motor racing.

Chatting to one of the marshals for the best time to go round and what to look out for, he said “Watch out for idiots where the car has a Nurburgring symbol on it. The drivers will have read that their car can do a lap in 7 or 8 minutes. After 3 laps of trying and getting nowhere near it; they crash. Of course they still believe they’re Lewis Hamilton or Max Verstappen, but broken bones and cars tell another story”.

I was careful and really enjoyed it, but only once.

Glad I don’t live nearby, the same thrill seekers drive those cars home and some forget they are not on a race track anymore.

Now it was back along another scenic route to Luxembourg and quieter roads. This is the last country to tick off on my round Europe trip and a country that is often ignored. But it shouldn’t be. It’s not the biggest but it has some beautiful roads, has plenty of interesting history and beautiful countryside.

On the roads, Luxembourg like some other countries sometimes thinks crash barriers are for wimps. If you or your passengers don’t like heights miss out the road along the river Our and the border with Germany.

I’m so glad to have had this as my last full day. Good to go out on a high note and drive some lovely roads. Not the eye popping beauty of Pyrenees, Swiss Alps or Norway but after 2 days in Denmark, northern Germany and the Netherlands, it was a very refreshing drive, even if most of it was in mid 30s heat. 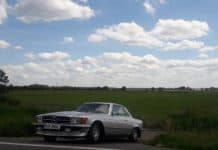 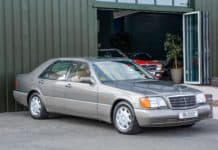 About the Mercedes-Benz W140 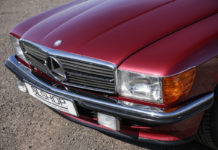 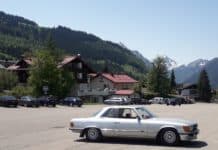 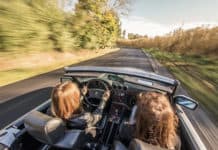 Left Hand Drive Cars – Top Choices for Escaping to the...