In 2016, SL shop in Warwickshire carved a new niche in the classic market with its 300SL SportLine. Based on the R107, the Mercedes’ straight-six was tuned to 255bhp with 250lb ft torque – numbers that dwarfed the original 185bhp/188lb ft. The three-litre motor was linked to a modern, five-speed manual Mercedes gearbox, and made great use of a bespoke coil-over suspension from Bilstein. Finished in leather and Alcantara, the Signal Red SportLine proved a revelation and challenged what I believed was possible with this 1971 to 1989 roadster. A new breed of sports car was born.

Today I’m back at SL Shop’s expansive site to drive its latest SportLine model. The cylinder count has increased by two, there are now six-gears to discover, and a 500 badge adorns the boot lid. For this build, the car’s long-time owner desired refreshed cosmetics, tauter suspension and a new gearbox, but decided against chasing even bigger numbers from the five-litre M117 engine. But who could blame him with over 240bhp and 290lb ft of twisting force already on tap?

That didn’t mean SL Shop couldn’t work a little magic on the motor, however, the company fully rebuilding the 90-degree motor, and porting and polishing the cylinder heads. Providing the crescendo is a misleadingly standard looking, stainless steel sports exhaust system, which I’ll return to later. 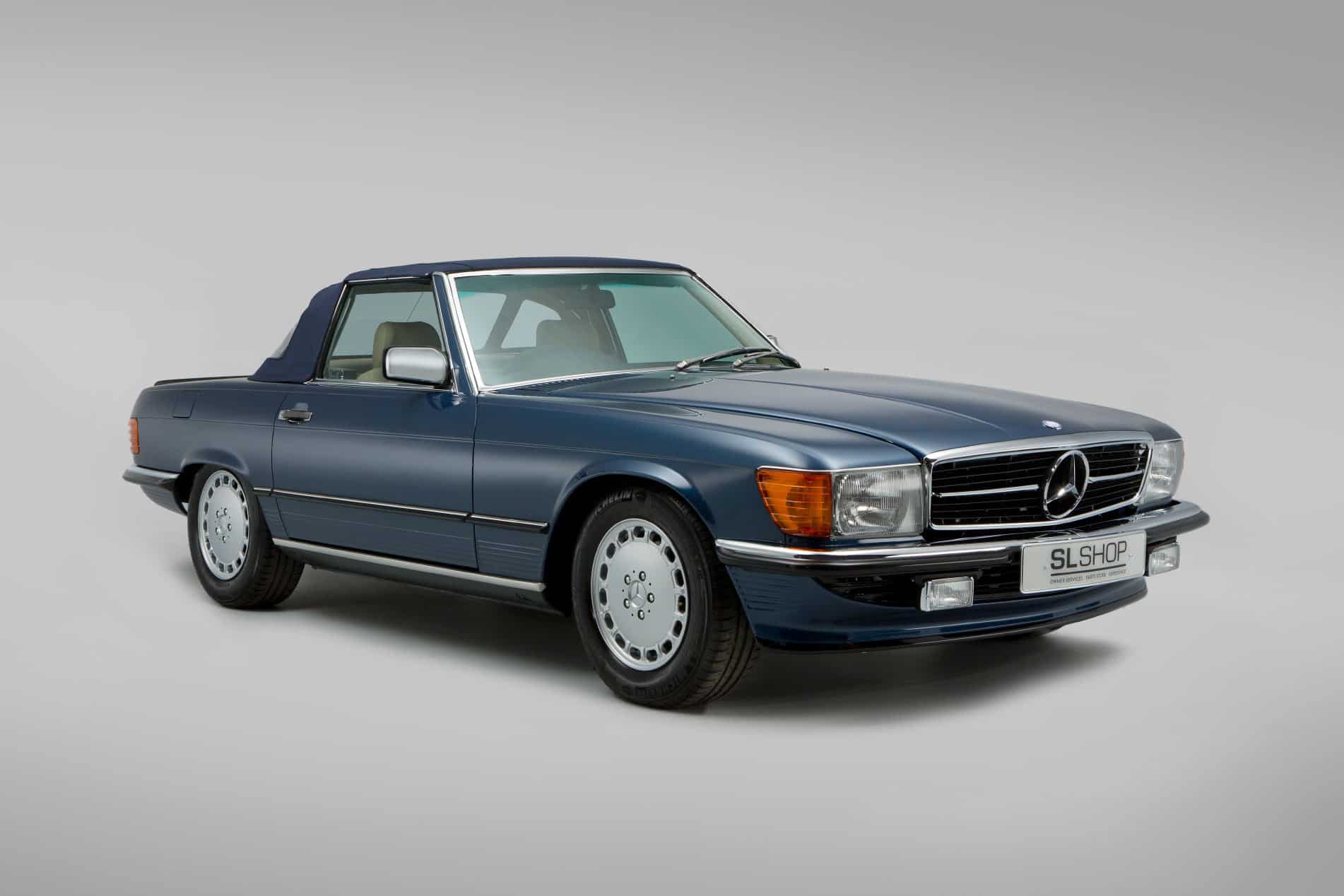 Following the owner’s wishes, SL Shop took the body back to bare metal then repainted it in original Nautic Blue, before fitting new mushroom leather /Alcantara within. The complementing black pepperwood trim pulls off quite a trick – at once it looks classic and modern, and straddles the transition to matte black leather on the dashboard, complete with Nautic Blue stitching. The vibrantly coloured thread can also be found on the rewrapped steering wheel and gearlever gaiter.

Overall, the 500’s finish is even better than that seen on the 300 SportLine prototype I drove in 2016. The light-blue-on-white dials look gorgeous, particularly when illuminated, and I love the SportLine lettering below the odometer. It smells like a brand new car in here, but remains utterly unfamiliar in form. That said, the hawk-eyed among you might notice a digital fuel/air meter has replaced the central air vent – the latter a feature on the standard car which I never quite know what to do with…

No SportLine would be complete without upgraded suspension, and this V8 follows tradition with adjustable Bilstein springs and dampers, plus SportLine spec anti roll bars and poly brushes. The ride height is 55mm lower than stock, and is one of the greatest giveaways that this is not your average R107. Even the wheels’ lips are sealed – 15-hole, flat faced, but wrapped in slightly wider 215/65 rubber.

When it comes to the art of suggestion, though, nothing tops the deep, creeping beat of a breathed-on Mercedes V8. The rebuilt motor catches in an instant, and unleashes a sound that almost entirely envelops you. Press the throttle pedal and it gets louder still, the motor twisting on its mountings and rocking the car, but never jiggling those seated behind with unwanted vibrations. This is old school power with none of the usual slack. 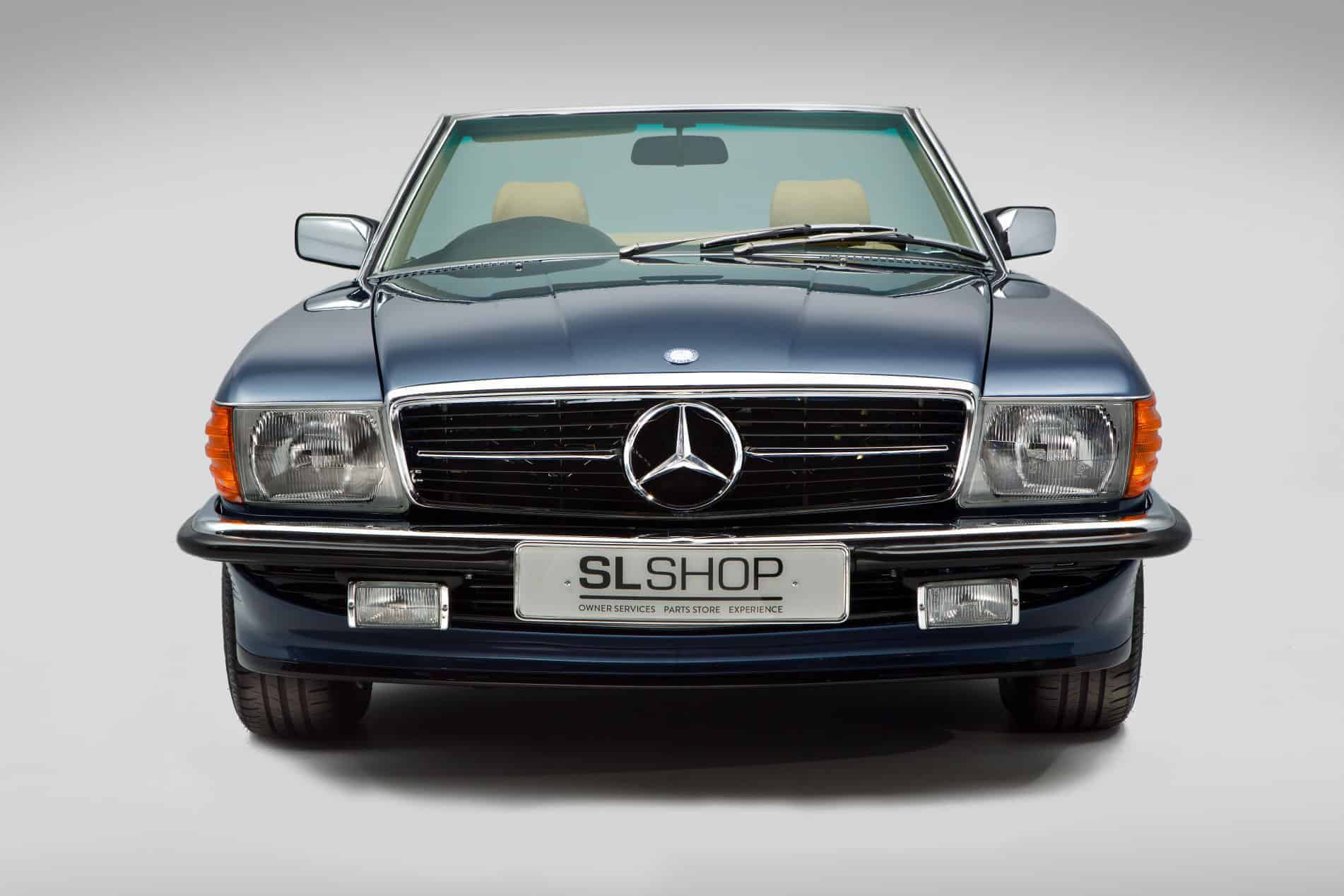 The six-speed gearbox was insisted on by the owner and is manufactured by Getrag in Untergruppenbach in Germany – the same company which provided the five-speeder in the 190 Cosworth. I expect the competition clutch to be difficult to modulate, but it engages beautifully, the crisp throttle response and nicely weighted flywheel ensuring progress through the gears is smoother than I dared to hope. Already I can tell I won’t miss having an automatic in this beefed up R107.

Being on the edge of the Cotswolds, SL Shop has many interesting roads on its doorstep, and I have just the car for exploring them. A few miles in and no matter whether I’m using the accelerator or avoiding it, the 500’s deep exhaust note dominates the driving experience. There is a touch of droning at 3,000rpm on part throttle, but the sports exhaust rediscovers its tune elsewhere in the range and is without question one of the most memorable aspects of the car. It toughens the image of a Merc that is otherwise deemed beautiful, classical and demure.

This being a fully restored car from SL Shop, the alert and finely tactile steering will surprise at least those who have never piloted a brand new 107. That said, the tight body control over lumps and bumps in the road will feel alien to everyone but those lucky enough to have steered a SportLine. Still capable of flowing with the landscape, the SL now continues such effortlessness through the bends – and you don’t have to be going hell for leather to appreciate this ability. With less body roll than standard, occupants don’t slither about on the wide seat bases, nor rattle so hard against the doors when the driver is really pressing on. The SportLine cannot quite escape its innate weight – there is some sacrifice for the rock like build quality – but it does a very good job of hiding it.

The braking system has been upgraded with vented discs and competition pads, meaning even less effort is required of the driver to operate this R107 effectively. A simple brush of the middle pedal is all you need to scrub off significant speed, and should you really anchor on, the roadster dips its flat nose but little else – the stiffened Bilstein suspension avoids any grazing of that handsome chin. 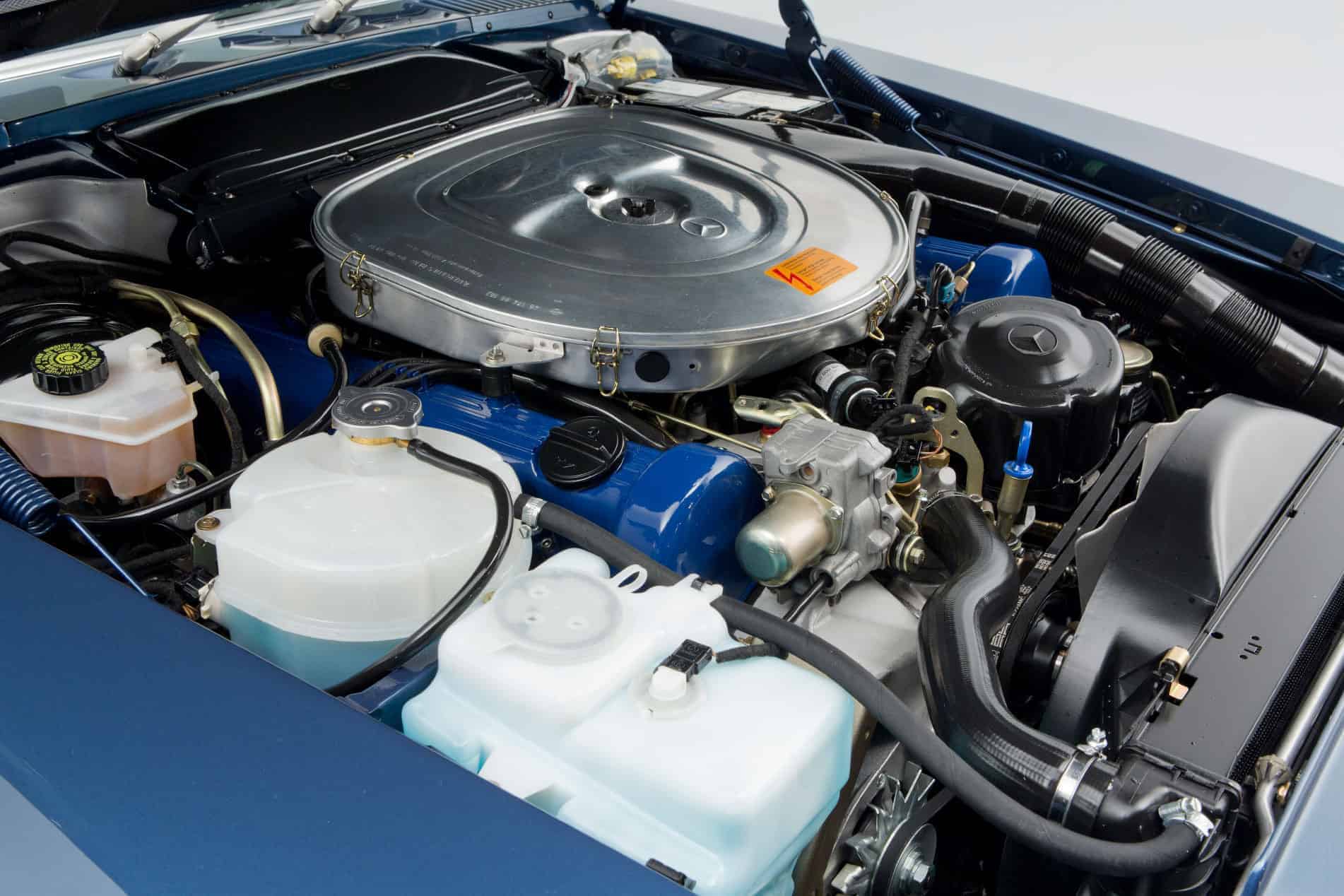 The Getrag manual gearbox improves throughout the drive, shaking off its notchiness when stone cold and becoming progressively slicker as the oil warms through. As with the 300 SportLine, having such a responsive engine at your disposal makes a compelling case for a manual gearbox, although many would be happy with an automatic. In fact, the V8’s torque would lend itself better to that application than the peaky six.

Right now though, I’m all for the Getrag manual option, even if it does cost £11,000. It is the final piece of the puzzle and truly separates this SportLine car from the average restored and resprung 107. It allows full deployment of everything that characterful V8 can muster, and makes you fall for the car that little bit more. The five-litre motor gives its very best some way before its indicated 6,000rpm redline, so you rarely need to extend its legs that far. But what a joy to hear it sing – deep and grumbly at first, then hot headed and ferocious at the top end, Who would have thought it? 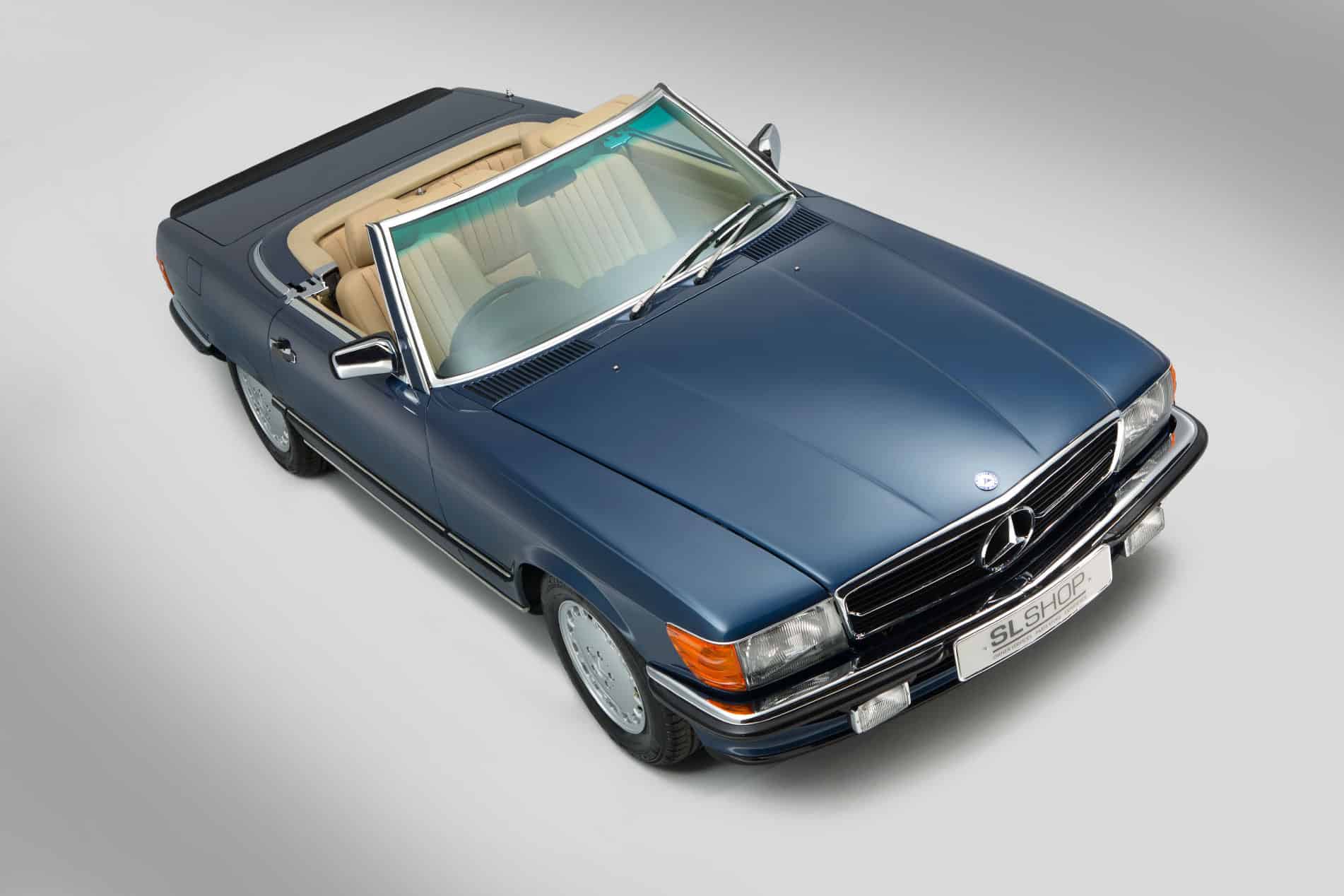 Traction is improved by a Qualife limited-slip differential on the rear axle, and it could turn this SportLine into a most extraordinary drift machine should you have the space. Meanwhile – and somewhat ironically – negative camber has been dialled in at the rear to rein in the (semi trailing arm) suspension’s tendency to induce oversteer on the limit.

As a package, the 500SL SportLine’s brilliance lies in its ability to satisfy the keen driver without lising its appeal as a cruiser; the ride is just right, the motor deliciously hearty, and that gearbox a surprise gift from the gods of Getrag. Turning my attention back to the cabin as the last miles tick by, I notice the modern Blaupunkt Toronto audio system, complete with CD player and Bluetooth. In truth, it’s probably the most useless feature of the car. Given how good the V8 sounds, I simply cannot imagine a time when I’d rather listen to something else. It would also help me get over paying the £170,000 asking price.

As an evolution of the SportLine brand the 500SL  is a natural and intoxicating one, and reinforces SL Shop’s belief that the R107 is capable of far more than we have been led to believe. Following our photoshoot, the car was returned to its owner in South Africa, whom we are told was absolutely delighted with SL Shop’s work. Him and me both.

Inspired? Enquire about having the SLSHOP appraise your R 107 SL

Browse our range of SportLine components for your SL 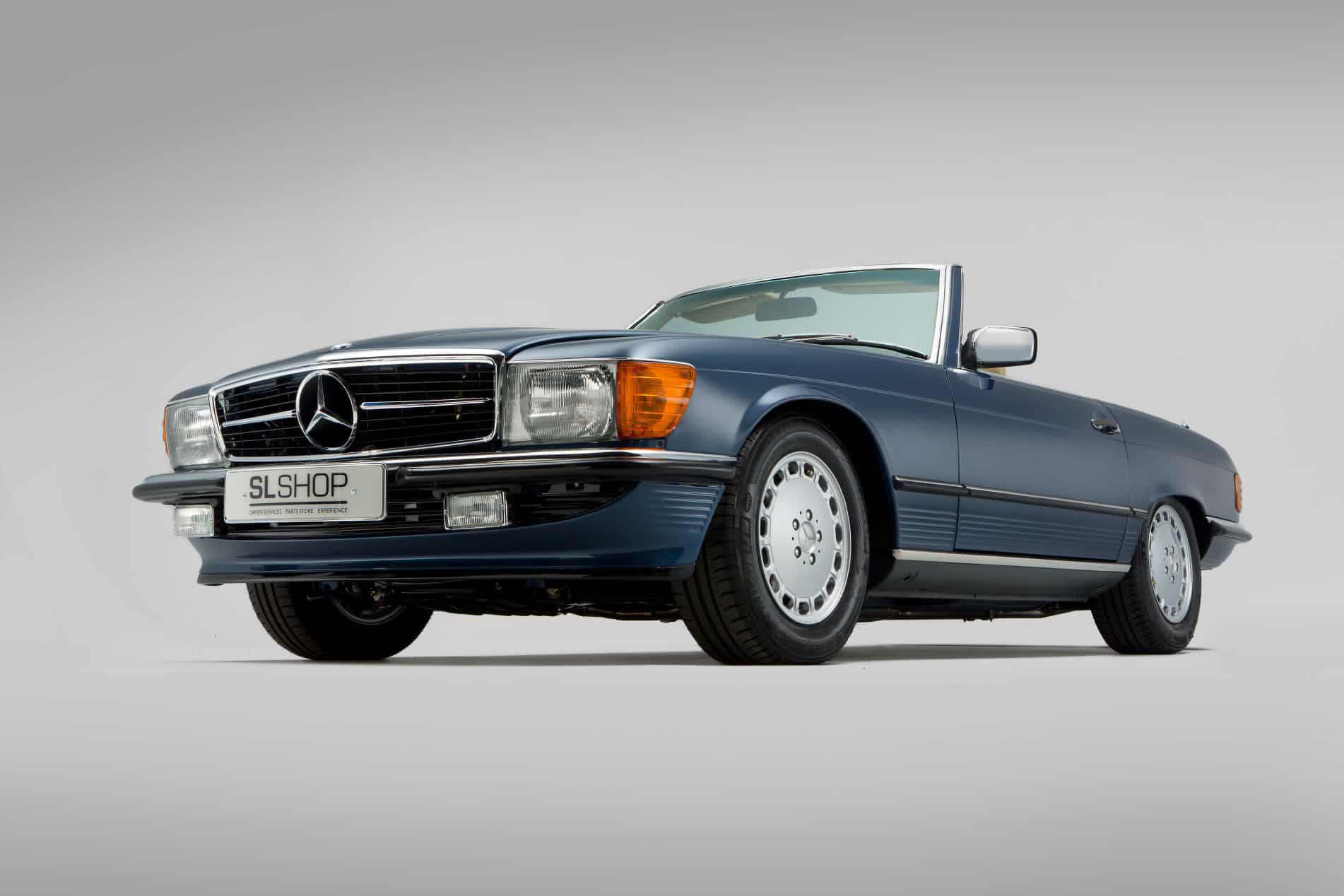 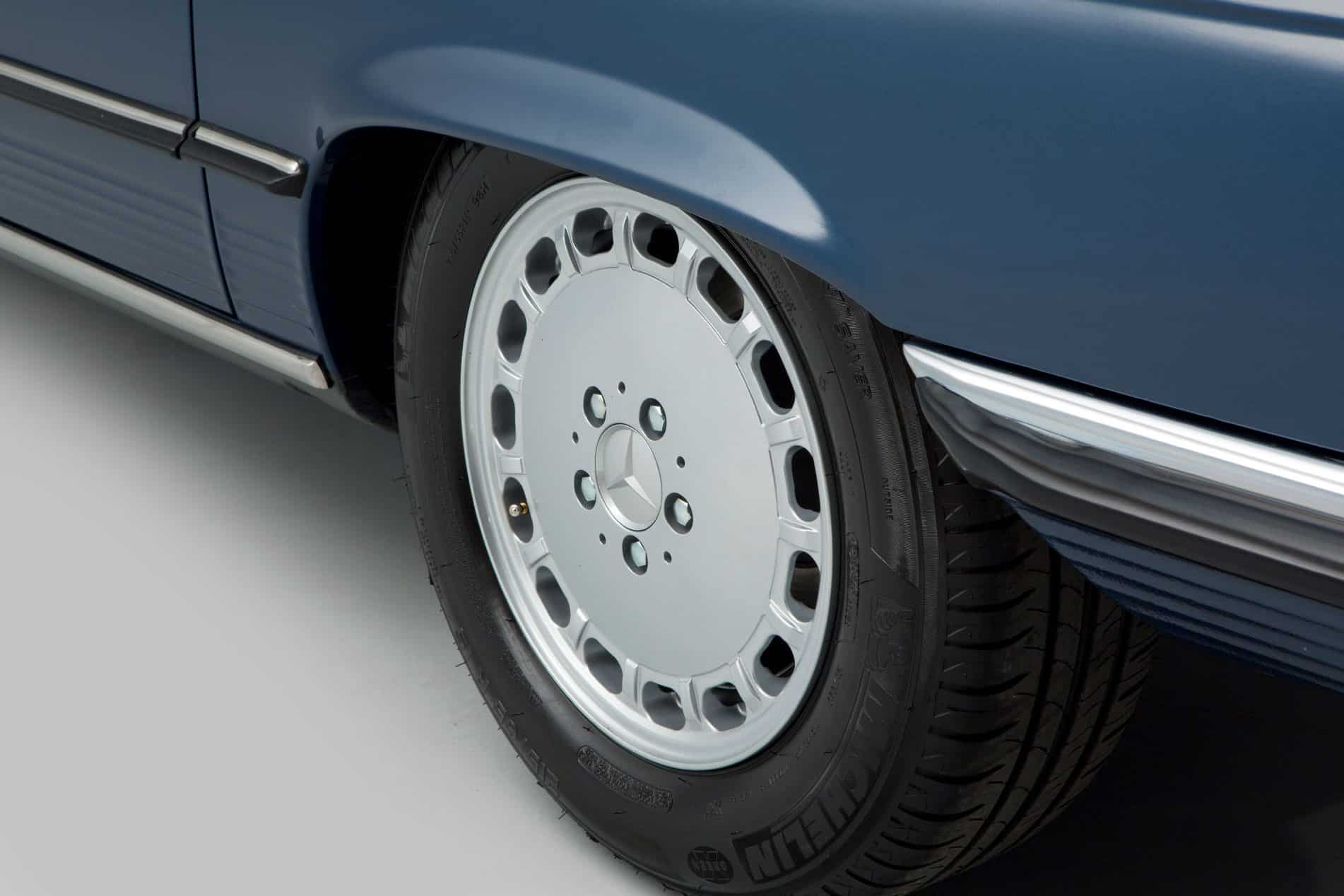 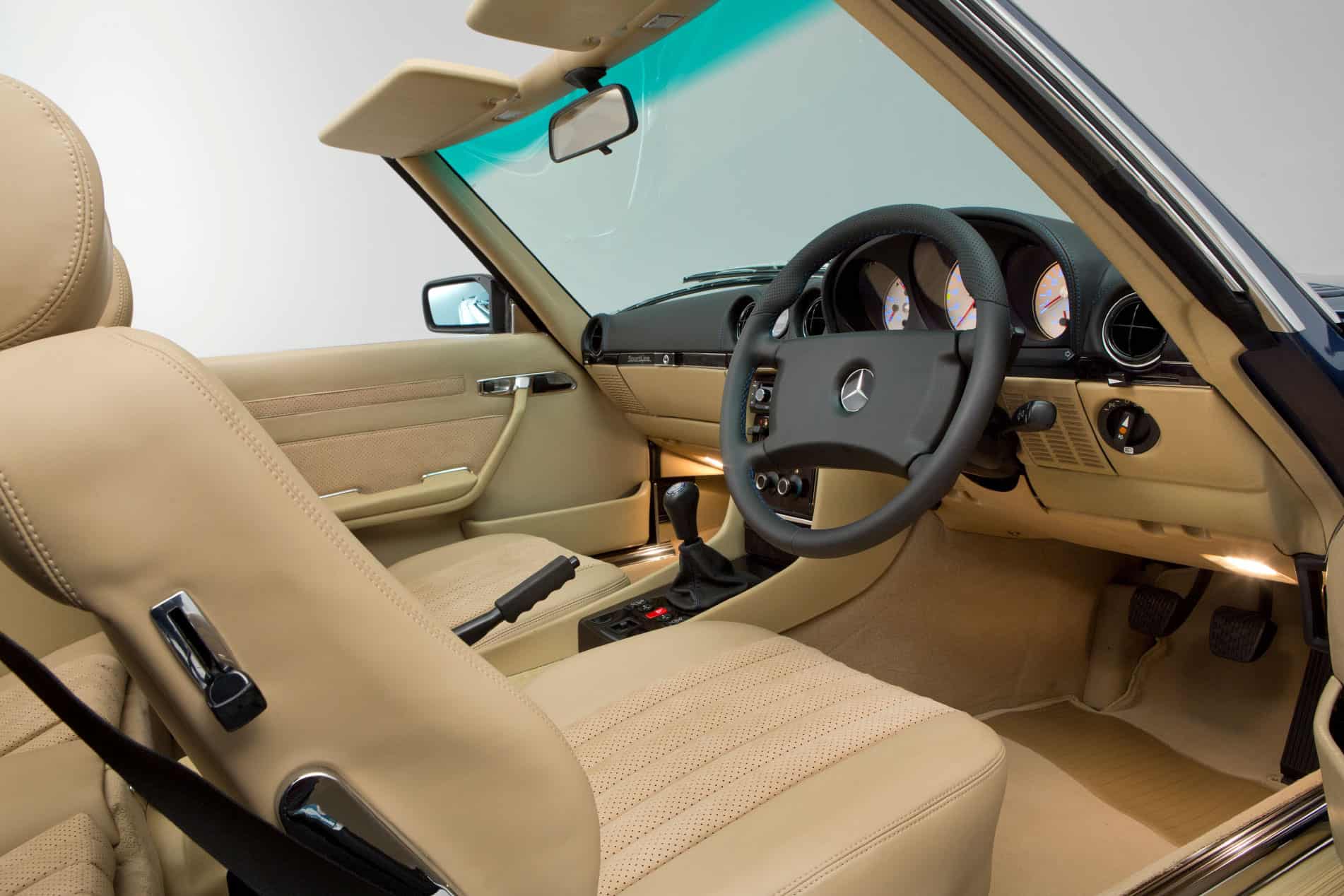 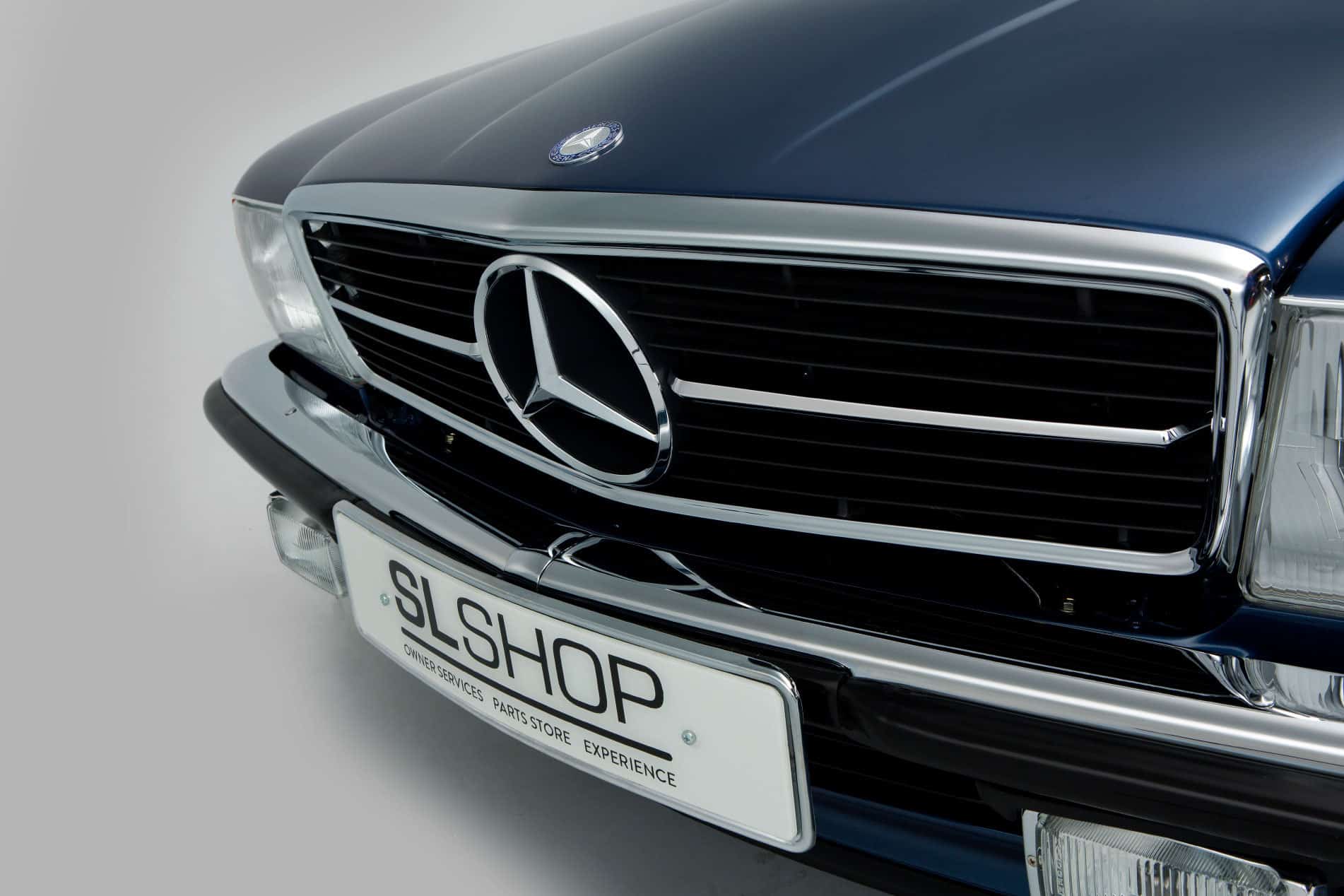 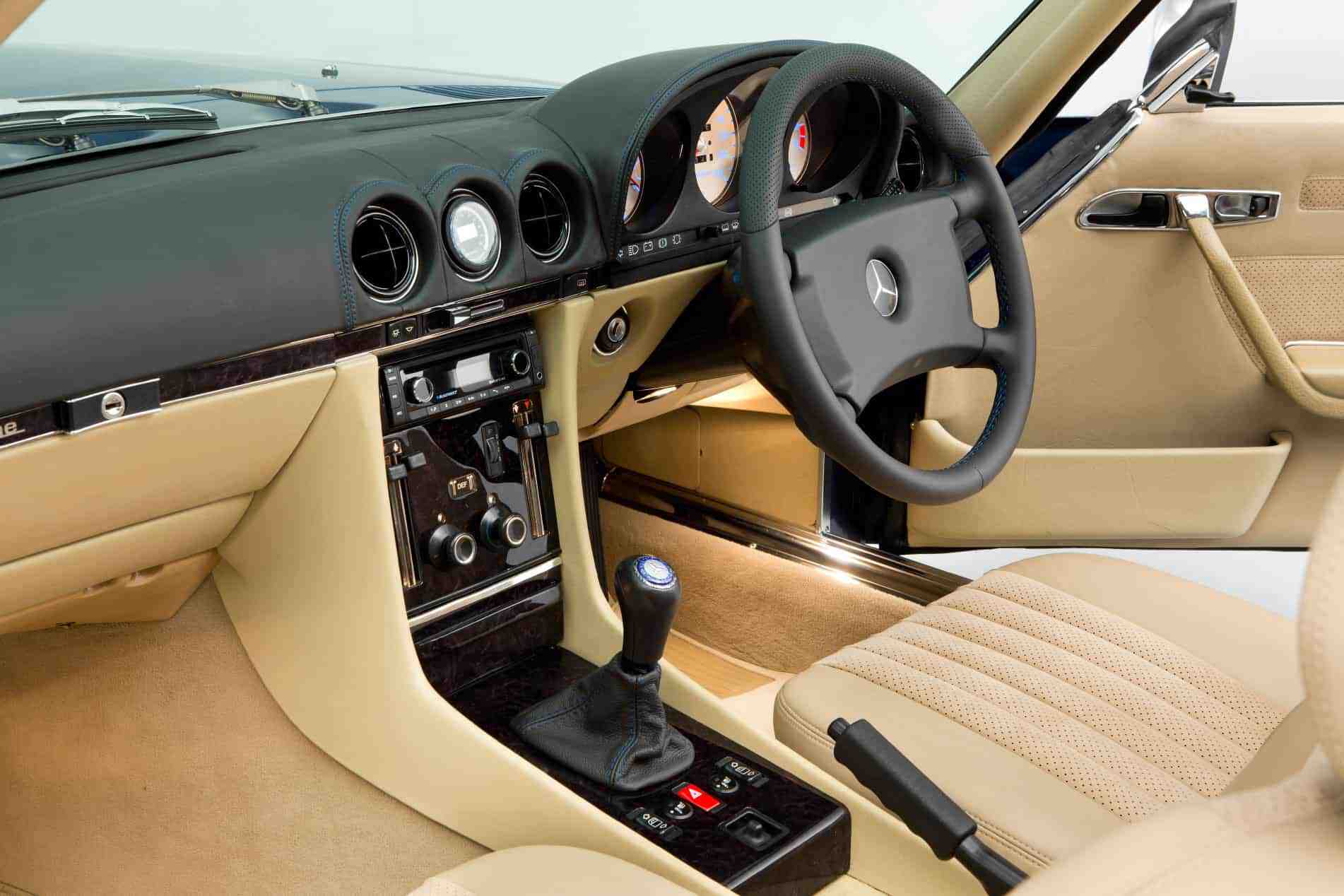